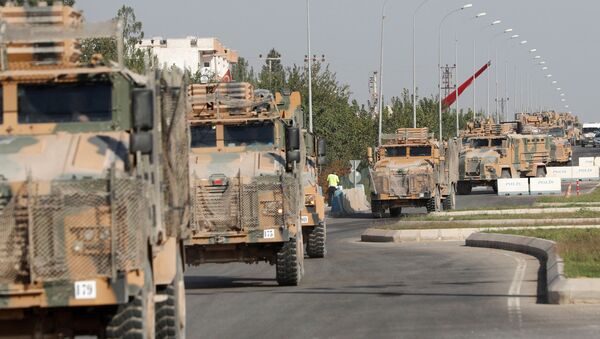 While US President Donald Trump continues spouting claims of bringing troops home from Syria and exchanges threats of sanctions with Turkey, the mainstream narrative is neglecting to acknowledge the two nations’ history of carving up Syria and the dozen US bases actively blocking Damascus from its own resources.

Friday marked the third day of Turkey’s "Operation Peace Spring" along the Syrian border, and despite Washington’s decision to shift some 50 soldiers out of the way, US Special Forces near Aleppo’s Kobani still ended up on the receiving end of the offensive.

Though a Friday evening Pentagon release noted that no Americans were injured by Turkish artillery fire, the Trump administration and the Turkish Foreign Ministry are still trading threats on an economic front.

In response to US Treasury Secretary Steve Mnuchin’s Friday announcement of possible US sanctions to curtail Turkey’s offensive, the Turkish Foreign Ministry issued a response that explained Washington was well-informed concerning “the target and scope of the operation” and that Ankara is prepared to “respond in full” against any actions from the Trump administration.

These higher-level exchanges, along with French President Emmanuel Macron’s talks with Trump, have dominated corporate media headlines and stories while simultaneously neglecting Turkey’s main objective and the US’ overwhelming presence in the region the Kurds call Rojava.

Ben Norton, a journalist with the Grayzone Project and co-host of the Moderate Rebels podcast, joined Radio Sputnik’s Loud and Clear on Friday to discuss the reality of US troops in Syria following Trump’s call to pull out and explain how Operation Peace Spring is business as usual in the country for Washington and Ankara.

“The US has constructed more than a dozen US military bases in illegally occupied, sovereign Syrian territory,” Norton told hosts Brian Becker and John Kiriakou. He pointed out that despite this fact, none of the articles talking about the Turkish invasion, which received an “American green light,” touch on the subject.

In addition to corporate media outlets neglecting to mention that the oil-rich region of Rojava is “protected” by US troops, coverage of the so-called American pullout does not reveal that Damascus is still unable to get access to “major roads that are being occupied by the US military,” he said.

Not only that, but Norton noted that Rojava is the “bread basket region of the country [and] represents a quarter of Syria’s sovereign territory that is militarily occupied by the United States, and it’s extremely fertile land where there’s a lot of wheat production and [other] food production.” Frankly put, “Syria has not had access to its own oil and wheat thanks to this US military occupation.”

The journalist explained that people should be skeptical of Trump and the US government’s claims of withdrawing troops from Syria, as the orders have only specified that servicemembers be moved from the border to other parts of the region. Even if Trump is genuine in his desire to bring American troops home, Norton said he believes that the US commander-in-chief is probably not even in control of his own foreign policy.

Turkey’s intentions, on the other hand, are obvious, in Norton’s opinion.

“It’s the dictionary definition of ethnic cleansing,” Norton argued. “Turkey wants to repopulate these Kurdish-majority areas with some of the 3.7 million Syrian refugees.”

He went on to suggest that history is repeating itself, as the Pentagon and other intelligence services assisted Turkey in conducting a very similar “carving up” of Syria’s Afrin, al-Bab and Jarabulus.

“This is a continuation of a policy that Turkey has already carried out with Washington’s approval. Washington doesn’t care about the Kurds, and it certainly doesn’t care about Syria. It’s perfectly happy seeing other allies like Turkey - which is a member of NATO - carve up the country,” he asserted.

Washington’s failure to let Operation Spring Peace occur would open the door for Damascus to possibly reclaim control of its own country.