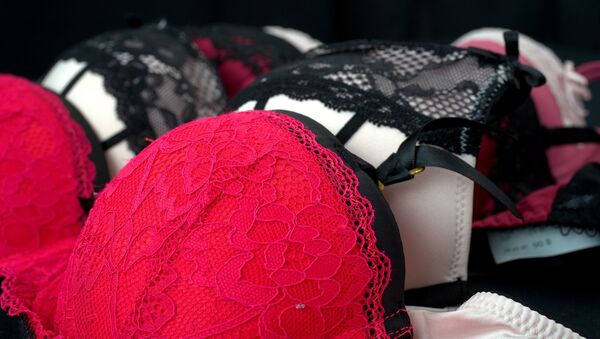 CC0 / /
Subscribe
International
India
Africa
The boyband is currently on its third world tour, with concerts scheduled across Europe.

The K-pop boy band Got7 was performing a concert at Ziggo Dome in Amsterdam in the Netherlands on 8 October as part of the “Keep Spinning” world tour 2019-2020 when an awkward incident occurred.

Jackson, the group's rapper, was passing through the scene when an "unidentified flying object" appeared out of the blue. The "UFO" subsequently turned out to be a bra that was thrown by one of the fans; a video of the incident appeared on the web and immediately went viral.

As the footage shows, the singer stopped for a while, took off his glasses to observe the item and put his finger on it. Then he simply walked away.

Since Asian society is mostly conservative, expressions of emotions like throwing bras at artists is not common at concerts of K-pop idols, but it turns out that this was not first such incident for Jackson. During a concert in Mexico on 13 July 2018, the singer found a black bra on the stage.

jackson: not this shit againpic.twitter.com/PHD9mbrO1U

Bra:
Jackson, a blind idiot: *takes off glasses and squints at it*

icb with jackson’s reaction when a bra was thrown on stage. he even checked it out and realized the size was big and was like “yall got big tiddies huh” #GOT7inAmsterdam #GOT7 pic.twitter.com/BkxMP9Ow9D

Someone threw a bra on stage and jackson stopped, took his glasses off and did a 👀, then looked at fans like "wow, y'all bold asf" ICAN'T BREATHWE