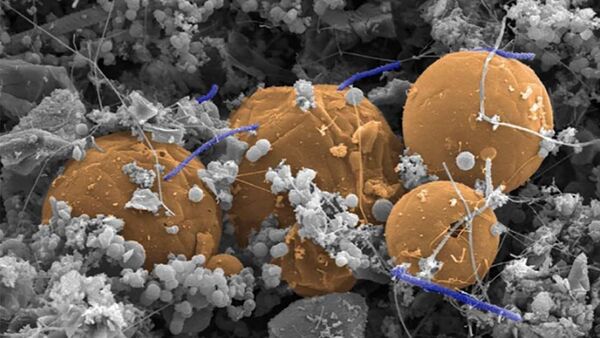 Earlier this year, a team of researchers reported that they had explored what is considered to be the oldest known water in a reservoir nearly 2,500 metres under the surface, in a mine located 550 kilometres northwest of Toronto. Their work builds on a report that suggests there could be an “underground Galapagos” deep inside the Earth.

University of Toronto geologist Barbara Sherwood Lollar, whose team has discovered sulphur-breathing bacteria deep underground in Canada's Kidd Mine, is going to carry out a special analysis to find out whether they are related to other creatures in “the deep Earth”, NBC reports. According to the broadcaster, she is hoping to have a result within result within a year or two.

The researcher suggests that the study could also provide clues to the origins of life on our planet, noting that such bacteria, which have survived without oxygen deep beneath the ground, would have been suitable for the harsh conditions when the Earth was young. Moreover, there is a theory that life might have appeared on more than one occasion and that these previous lifeforms might still be preserved somewhere.

“We've literally only scratched the surface of the deep biosphere. Might there be entire domains that are not dependent on the DNA, RNA and protein basis of life as we know it?” mineralogist Robert Hazen from the Carnegie Institution’s Geophysical Laboratory told the broadcaster.

A physicist at Arizona State University, Paul Davies, echoed his stance, calling for a search for so-called “shadow life”.

"That would stand out as a candidate for shadow life”, he said.

Although no signs of this have been discovered by Sherwood Lollar’s team in the Canadian mine, the bottom of which had remained untouched for up to two billion years, she agrees that her colleagues should keep a wide-open mind.

“We see only what we look for. If we don't look for something, we miss it”, she told NBC News.

It was reported in July that her team had discovered a population of microbes that breathe sulphur compounds and live without sunlight, feeding on the mineral pyrite, also known as fool’s gold. The mine where it was found is described as “the deepest spot ever explored on land and the reservoir of the oldest known water”.

“It's a fascinating system where the organisms are literally eating fool's gold to survive. What we are finding is so exciting — like ‘being a kid again’ level exciting”, she said, describing her discovery.

Her study is based on a 2018 report by researchers at the Deep Carbon Observatory, who attempted to sum up the extent of the biosphere in the deep Earth, which they called an “underground Galapagos”. According to their estimation, there could be five-hundred-thousand-trillion-trillion cells there, weighing roughly 300 times as much as all living people, deep under our feet.