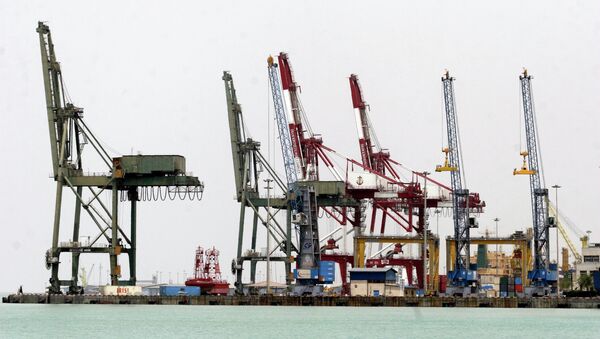 © AP Photo / Hasan Sarbakhshian
Subscribe
French President Emmanuel Macron floated the idea Tuesday of US and Iranian leaders meeting face-to-face, to which Washington immediately agreed, but Tehran demurred. An Iranian scholar told Sputnik that Iran accepting would have played into US President Donald Trump’s narrative that brash behavior would force them to the table.

Macron has attempted to position France as a neutral broker between Washington and Tehran. One of the signatories to the 2015 Joint Comprehensive Plan of Action (JCPOA) that lowered economic sanctions against Iran in exchange for a halt to its nuclear weapons program, France profited greatly from four subsequent years of trade with the 90-million-strong oil producing nation and resisted US attempts to undo the agreement in May 2018.

When Trump announced the unilateral US withdrawal from the nuclear agreement and the imminent reimposition of sanctions on Iran, French business interests hesitated to cooperate. However, even by May 2018, Air France was already rolling back scheduled flights from Paris to Tehran on account of decreased interest in business flights. In June, French auto giant Groupe PSA, the maker of Peugeot and Citroen cars, announced the suspension of a deal with Iranian makers Khodro and Saipa to sell its cars in Iran, and French oil company Total canceled plans to launch a large natural gas mining operation in Iran, France24 reported at the time.

Paris, along with the remaining JCPOA signatories, dissented from Washington’s accusations that Tehran was violating the deal, and pledged to continue working within the deal so long as Iran also did so.

Along with other JCPOA signatories Germany and the UK, France took the lead in establishing the INSTEX non-dollar payment mechanism for trading with Iran, once Washington compelled the world’s primary bank wire security organization, SWIFT, to comply with anti-Iranian sanctions. However, the special trade vehicle has struggled to get off the ground, most of all amid skepticism from Tehran that it would be worth the trouble - or risk.

More recently, when France hosted the annual G7 summit in the southern city of Biarritz last weekend, Macron invited Iranian Foreign Minister Mohammad Javad Zarif, recently sanctioned by Washington, in the hopes of putting him and Trump or other US diplomats into direct contact. However, like Macron’s later suggestion, the effort ultimately flopped, with Trump saying it was “too soon” for such a meeting.

“I think we’re just going to see much of the same: more escalation, more tension, both in the Persian Gulf region, but also in the broader West Asian part of the world,” Mohammad Marandi, an expert on American studies and postcolonial literature who teaches at the University of Tehran, told Radio Sputnik’s Loud & Clear Tuesday.

“I’m surprised that the United States continues to think that Iran is going to back down and that Iran is going to relinquish its sovereignty. This is not just coming from Trump supporters, but it comes from many mainstream so-called ‘experts’ and ‘analysts’ that I’ve been reading in the last 24 hours.”

“I think it has to do with this false assumption that somehow it is inevitable that Iran will fall to its knees, because that’s the way the world works,” and that the US will “retain their hegemony and influence, because that’s the way the world is supposed to work. But I think that they are making a major mistake, a major miscalculation. The world is different today. The United States - its power has declined in relative terms. And Iranians - the [1979] revolution itself was about sovereignty, independence, dignity, and these are not things that the Iranians are going to relinquish simply because the Americans are bullying the country.”

“I think that the Europeans would like to show some distance from the Americans,” he said, noting Washington is “trying to wreck the EU.” Marandi said Macron inviting Zarif to Biarritz was “a slap in the face” to Trump and that some US politicos thought so as well.

“I’m very suspicious about whether the French have really grown a spine - or the Europeans - but Iran is testing them; Iran is saying that ‘Look, we’ve been abiding by the nuclear deal, all alone, and we cannot continue down this road. If you don’t start committing yourselves to what you promised to do, then we’re going to have to gradually leave the deal.’”

Meanwhile, US and French ally Israel has stepped up its attacks in the Middle East, carrying out airstrikes against targets in Iraq, Syria and Lebanon, ostensibly with the goal of reducing the Iranian danger to the Zionist State. However, Tehran and all three governments have repudiated Tel Aviv’s actions as provocative.

“The Israelis exaggerate their airstrikes in a big way,” Marandi noted. “They do not target Iranians at all. I mean, you do not have a single picture of an Iranian available or a name of an Iranian that’s been killed by the Israelis in Syria in the last year. But the Israelis keep saying they ‘struck Iranian targets’ and ‘centers.’ But in today’s world, all the soldiers, they have cell phones, or their friends have cell phones, and smartphones. Within a couple of hours, their pictures will be online - friends and relatives and family and people linked to them, all of them will be informed about what has happened.”

“The Israelis simply use Iran in order to justify what is utterly illegal, and that is violating the sovereignty of other countries,” Marandi told hosts Brian Becker and John Kiriakou. “Why has Israel been attacking Syria? Because it wants to keep Syria weak. It doesn’t want the Syrians to defeat ISIS [Daesh] or al-Qaeda. That’s why both ISIS and al-Qaeda were tolerated alongside Israeli forces alongside the Golan Heights for years. Israelis officials admitted, the former head of Mossad admitted, that they were aiding these groups alongside Israeli troops.”

Israeli army officers explain frankly why they support ISIS/al-Qaida in Syria and think US should too https://t.co/2J4qO25HJ3 pic.twitter.com/PLlBjEiQ7l

​“The same is true of Hezbollah,” Marandi noted. “They haven’t been killing Hezbollah soldiers until a couple of days ago … All of these are to show that [Israeli Prime Minister Benjamin] Netanyahu is a tough person and so that the right wing … would vote for him.” He further noted that the US has “extreme hostility” toward the Popular Mobilization Forces in Iraq that defeated both the US and later Daesh.

Marandi said the Israelis couldn’t have carried out the strikes without the US signing off on them.

“The problem is, and the foolishness of this policy in Iraq in particular, is by aiding the Israelis to carry out these drone strikes, the United States is creating immense hostility towards itself among ordinary Iraqis,” he said.

000000
Popular comments
Trump is not the President of Israel but is the President of the USA. His actions amount to treason, putting Israel ahead of this country. Impeaching him would put an even more stupid traitor, Pence, in power. I pity Russia and China trying to figure out what the delusional madman, our President, will do next; Trump doesn’t even know from day to day what he will do next to screw up!

Steve
28 August 2019, 02:29 GMT11
000000
"with Trump saying it was “too soon” for such a meeting." Nonsense Mr Trump, you were surprised and therefore scared to meet Zarif in Biarritz last weekend. It was the fear that got you! The fact that Zarif Flew all the way from Paris to Biarritz and delayed his Asian trip on Sunday shows that he was willing to meet Trump face to face with no pre-conditions. Trump boasting he is a Dealmaker-in-Chief chickened out!