Sherlock Season 5 ‘Would Have to Be Really, Really Special’ to Return - Martin Freeman 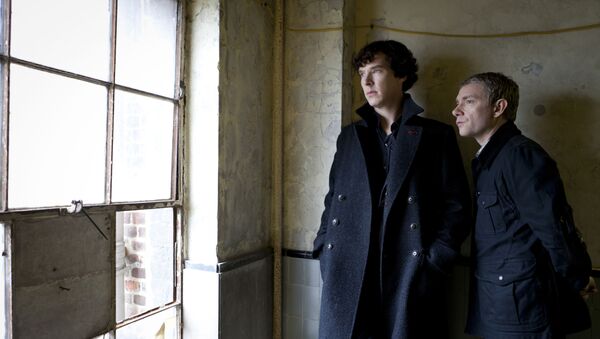 © AP Photo / Colin Hutton
Subscribe
The renowned actor who played Dr. Watson for four seasons believes it is the right thing to take a hiatus after Season 4, instead of coming back with mediocre content.

UK Actor Martin Freeman, known for his portrayal of Bilbo Baggins in Peter Jackson’s The Hobbit film trilogy and Dr. Watson in the renowned Sherlock TV series, says that while he does not believe Season 4 was a definitive end to the series, he is certain the show would benefit from taking a pause.

“The way the story went, in the last series, felt like, if not a full stop, then certainly a semi-colon or an ellipses. It felt like a pause. It didn’t feel like something where we could just pop up the next year and go, ‘Hey, folks, we’re back,’” he said, in an interview with Collider.

According to the actor, it is important to not milk a franchise for what it’s worth, instead, stopping when a story arc has been concluded.

“I’m a huge believer in stopping doing something when you want to. If you’ve said what you want to say, get off the stage, and really have the guts to leave it. I don’t know if it’s more [the writers] want to say,” he said.

Freeman did not dismiss the idea of coming back as Dr. Watson again in a future Season 5, but underscored that it has to be something “really special.”

He pointed out that, due to Sherlock’s format of a few long episodes per season instead of ten shorter bits, the show achieved an “event” status and audience expectations are high.

“It always felt like an event, so if we do more, it has to be worthy of that. We couldn’t come back with something that was quite good. It would have to feel really, really special. It was that kind of show,” he suggested.

The actor said that, currently, everyone involved in the show has their hands full with other projects. Benedict Cumberbatch (Sherlock Holmes) is due to make a Doctor Strange sequel next year, and writers Steven Moffat and Mark Gatiss are about to launch a brand series about Dracula. Sherlock is not coming back any time soon, he opined, but it’s too early to dismiss it completely.

000000
Popular comments
Sherlock is on the case of what's on.