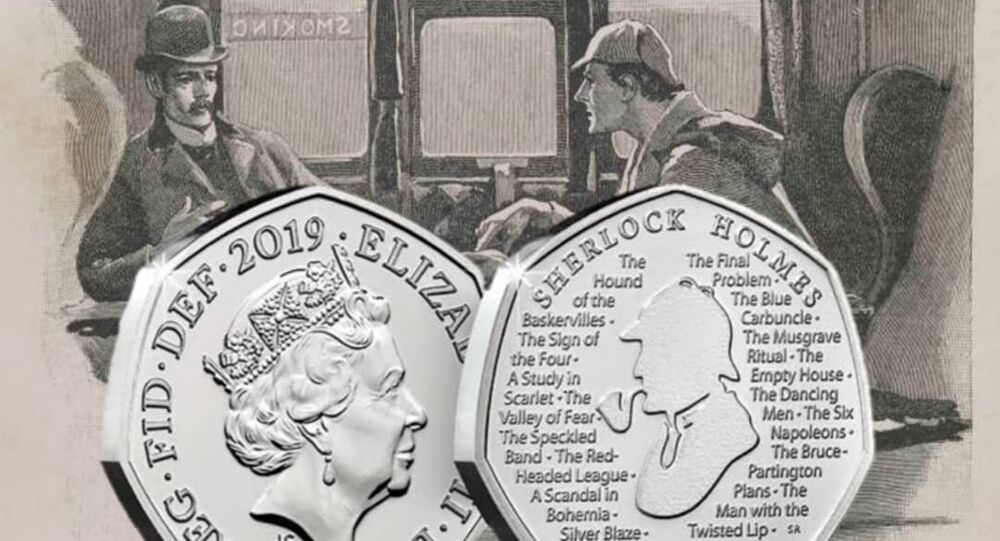 The storybook sleuth's famed profile, replete with pipe and deerstalker, appears on the coin surrounded by the names of his most popular adventures. In honour of Holmes' investigative prowess, the coin also features lettering so tiny it requires a magnifying glass to decipher it.

Versions of the coin have been put on sale on the Royal Mint's website, with prices ranging from £10 for a 'brilliant uncirculated' version to £795 for a gold proof coin. The coin commemorates 160 years since the birth of the character's creator — Sir Arthur Conan Doyle — on May 22nd 1859.

The coin will enter general circulation in the coming months, although an exact launch date is yet to be confirmed.

Being huge Sherlock Holmes fans (modern and classic) we are super excited about the newly announced Sherlock Holmes 50 Pence to celebrate the 160th anniversary of the birth of Sherlock Holmes’ creator Sir Arthur Conan Doyle. pic.twitter.com/DoCDOhT1kv

​Doyle's credited with popularising the significance of fingerprints, the form of evidence being mentioned in the 1890 story The Sign of the Four. Coins also make an appearance in his work, for instance in A Scandal in Bohemia, where the detective is given a sovereign by Irene Adler for being the best man at her wedding.

The stories of Sherlock Holmes have been brought to life on this stunning new 50p coin which was issued as part of the 2019 Annual Coin Set, but it's now available to own individually.

If you want to add one to your collection in BU quality, visit: https://t.co/b1jSLf16L1 pic.twitter.com/5HHplRzQKI

​Designer Stephen Raw hoped to bring out the "inner detective" in anyone who finds the coin in their change by including the microscopic lettering.

© AFP 2021 / JACK TAYLOR
Someone Call Sherlock! Scotland Yard Needs Help With 'Mystery' Finger
"Growing up in London in the 1950s and 1960s, my father would often take a short detour in the family car to drive down Baker Street to see where Sherlock Holmes had lived. I love all the stories — in my design for the coin I have listed the most popular of those adventures but by necessity have kept the words very small. I hope it will encourage the 'inner detective' in those who are intrigued by the coin. Naturally, the only way to solve 'the mystery of the text' is by using that essential piece of equipment always carried by the intrepid sleuth: a magnifying glass," Raw said.
...
Reddit
Google+
Blogger
Pinterest
StumbleUpon
Telegram
WhatsApp
0 0