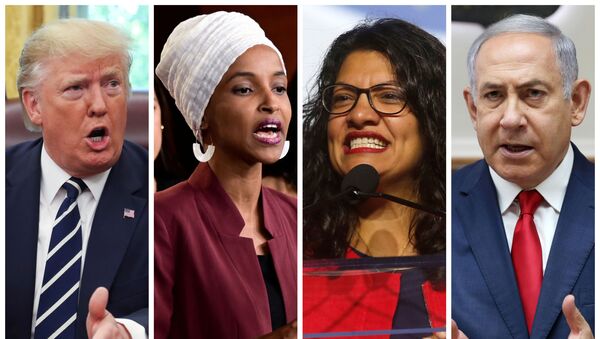 © REUTERS / File Photo
Subscribe
While Israel is preparing for the September general elections, Prime Minister Benjamin Netanyahu has come under heavy criticism from US Democratic lawmakers and the Israeli opposition over barring two House Democrats, Rashida Tlaib and Ilhan Omar, from entering the country.

On 16 August, US Democratic Congresswoman Rashida Tlaib cancelled her trip to Israel after being granted permission to enter the country for a family visit. The US politician earlier sent the Israeli authorities a petition citing the "humanitarian grounds" of her visit amid a firestorm of criticism in the left-leaning mainstream media.

​The move came after the Netanyahu government barred Tlaib and her party fellow Ilhan Omar from entering Israel on 15 August in accordance with a 2017 law blocking those advocating a boycott of the country. Both Tlaib and Omar, who have repeatedly been accused of anti-Semitism, previously voiced support for the Boycott, Divestment, and Sanctions (BDS) movement against Israel over its treatment of Palestinians in the West Bank and the Gaza Strip.

​The ban was preceded by Donald Trump's tweet saying that "it would show great weakness if Israel allowed Rep. Omar and Rep. Tlaib to visit", which was interpreted by Netanyahu's opponents on both sides of the Atlantic as the prime minister's giving in to Trump's pressure.

Israeli newspaper Haaretz raised the alarm that the move had broken "special relationship" between the US and Israel, while US Democratic presidential candidates Elizabeth Warren and Bernie Sanders denounced the ban as "enormous disrespect" to Congress.

Nevertheless, Israel's subsequent decision to permit Rashida Tlaib to visit the country following the ire in the left-leaning mainstream media prompted Netanyahu's political rivals to yet again point the finger at the prime minister, this time criticising him for a "lack of policy".

"Netanyahu’s zigzag on the entry of the US congresswomen into Israel stems from his ongoing lack of policy", said Benny Gantz, the leader of the Kahol Lavan party and Netanyahu's main contender in the upcoming snap vote, as quoted by The Times of Israel.

Israel Has Sovereign Prerogative to Deny Entry to Any Person

According to Alan Baker, former legal adviser to Israel’s Foreign Ministry and former ambassador to Canada, both Israel's decisions – to bar the congresswomen from visiting Israel and permitting entry for Rep. Rashida Tlaib – were made independently and were not related to either Trump's tweets or the "negative reactions by Democratic elements and media, all of whom clearly are trying to enhance the issue for their own political or commercial reasons".

"Israel, like every other country, has the sovereign prerogative to deny entry to any person", Baker emphasises. "The fact that the barred lawmakers rushed to accuse Israel is not surprising, and is a continuation of their hostile attitude to Israel, thereby justifying the decision to bar them. The fact that they chose to come separately and later than the other congressional delegations is indicative of their attempt to turn the visit into a provocation".

The ambassador also rubbished the claim that the incident could cause significant damage to Israel’s relations with the US Democratic Party, previously voiced by House Democrat Dean Phillips and Executive Director of Jewish Democratic Council of America Halie Soifer.

"As to damage to relations between Israel and the Democrats, it is the three congresswomen that, for the past few years, have been the cause and source of the damage to relations with Israel", Baker says, referring to progressive Democrats Rashida Tlaib, Ilhan Omar and Alexandria Ocasio-Cortez, dubbed "the Squad" along with their counterpart Ayanna Pressley. "Barring their entry to Israel is merely an excuse by those elements in the Democratic Party that have been, and continue to be hostile to Israel. It’s a great reason for them to openly vent their hostility and feel good about it!"

Like it or not, Tlaib and Omar are fast becoming the face of the Democrat Party. Cortez (AOC) is fuming, not happy about this!

​Referring to the potential consequences of Netanyahu's decision, Ambassador Baker presumed that "it’ll pass in due course when the Democrats calm down and realise that Israel is still a vital ally of the US and the three congresswomen orchestrated the whole event as a means of trying to harm Israel".

"They’ll come to realise also that these three congresswomen are damaging American vital interests", he believes.

Dan Diker, project director for the Program to Counter Political Warfare and BDS at the Jerusalem Centre for Public Affairs, shares the ambassador's concerns about the apparent provocation on the part of the progressive Democratic lawmakers.

According to him, Tlaib and Omar's trip to Israel and the disputed territories of the West Bank was nothing short of an "act of political warfare".

The West Bank and the Gaza Strip were seized by Israel during the Six Day war of 1967 and designated as "occupied Palestinian territory" (OPT) by the United Nations in 1999. In November 2012, United Nations General Assembly resolution 67/19 reaffirmed "the right of the Palestinian people to self-determination and to independence in their State of Palestine on the Palestinian territory occupied since 1967". Recently, reports emerged saying that the Netanyahu government is lobbying the Trump administration to recognise Israel's sovereignty over the West Bank following the recognition of Jerusalem and the Golan heights. The Israeli Prime Minister's Office has rejected the assumption.