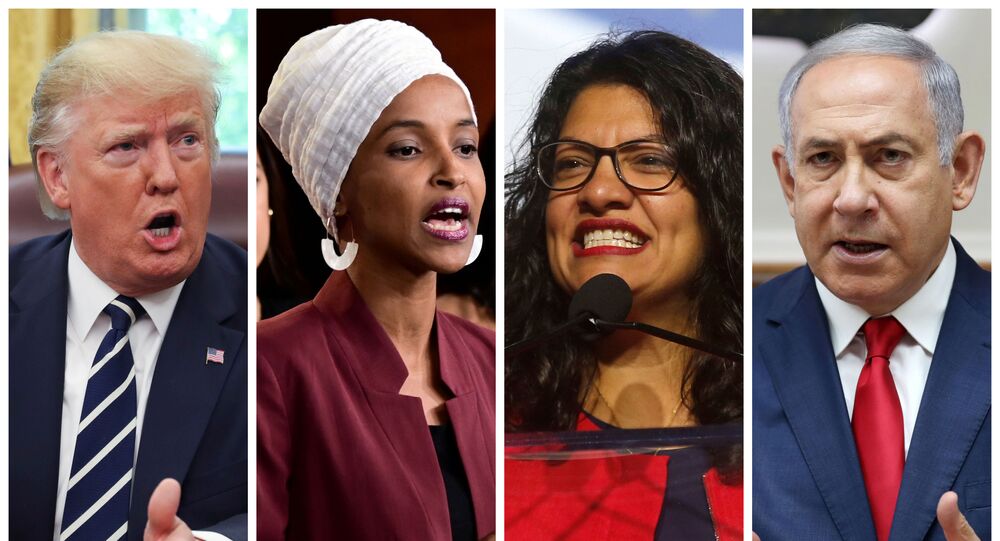 US President Donald Trump’s call for Reps. Ilhan Omar (D-MN) and Rashida Tlaib (D-MI) to be denied entry into Israel appeared to become reality on Thursday after Omar tweeted a statement against Israeli Prime Minister Netanyahu ahead of the duo’s trip next week. However, Israel faces mounting opposition from Americans to let them in.

Omar and Tlaib, critics of Netanyahu’s government, supporters of the boycott, divestment and sanctions (BDS) movement against Israel and also the first two Muslim women ever elected to Congress, were set to visit Israel from August 18 to August 21 until Trump’s Thursday morning comments on Twitter.

Not even three hours later, Trump tweeted another attack at the two Muslim congresswomen.

“Representatives Omar and Tlaib are the face of the Democrat Party, and they HATE Israel!” reiterated the US leader.

In response, Omar issued a statement slamming Netanyahu, saying that he “has consistently resisted peace efforts, restricted the freedom of movement of Palestinians, limited public knowledge of the brutal realities of the occupation and aligned himself with Islamophobes like Donald Trump.”

Similarly, Tlaib tweeted that Israel’s decision to bar her from entering the country “is a sign of weakness [because] the truth of what is happening to Palestinians is frightening.”

Though there was some back-and-forth between the Israeli prime minister’s office and the foreign ministry concerning who actually issued the ban, Netanyahu ultimately said in a Thursday release that he stands by the ministry’s decision and pushed back against the idea that denying the lawmakers entry would hinder US-Israeli relations.

Miko Peled, journalist and author of “The General’s Son - A Journey of an Israeli in Palestine,” and "Injustice: The Story of the Holy Land Foundation Five,” told Radio Sputnik’s Loud and Clear on Thursday that whether Israel obeys Trump or not, the exposure of the Israeli government’s regime will happen all the same.

“I’d be shocked if [Netanyahu] actually refuses them entry, because they are important members of the Democratic Party … members of the House of Representatives,” Peled told hosts Brian Becker and John Kiriakou. “It would be absolutely insane for an Israeli government to deny them entry.”

He went on to admit, however, that the “political pressure” of whether or not to deny Omar and Tlaib access to the country is “so high” that they will probably have specific restrictions tied to their visits.

The journalist pointed out that to deny the congresswomen entry would draw attention to the Israeli government’s need to hide something, but if the two were granted access to Israel, then they could expose the “dark apartheid regime” from the inside.

As someone banned from Israel, I guess I'm in really good company today

If the lawmakers are actually barred from entering Israel for their criticisms, they won’t be the first Americans: in January 2018, Tel Aviv blacklisted 20 US organizations that support the BDS movement, including the American Friends Service Committee and Code Pink: Women for Peace.

Code Pink’s national co-director, Ariel Gold, told Sputnik in April 2018 that even though she is Jewish, she had been "detained and interrogated intermittently for about seven hours and then put back on a plane to JFK [Airport]” after trying to enter Israel.