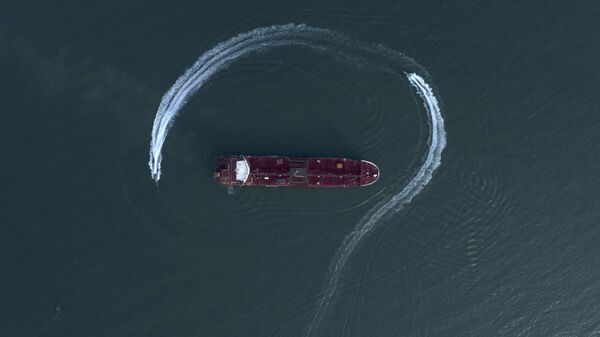 Egor Efimchik
All materials
Iranian forces have seized three commercial vessels in the Strait of Hormuz – the most critical waterway for the world’s oil industry – over alleged maritime violations, prompting a backlash from a spate of Western countries, primarily the United States.

The Pentagon suspects that Iran is interfering with the communications of ships passing through the Strait of Hormuz, warning shipping companies of purported Iranian threats in the area.

CNN quotes an unnamed defence official as claiming that GPS jammers have been installed on Abu Musa Island, which lies in the eastern Persian Gulf near the entrance to the crucial strait. The tiny island is claimed by both Iran and the UAE but controlled by the former.

According to the official, Iran allegedly placed the jammers there so as to hamper with navigation systems and get civilian aircraft and ships to go astray, wandering into its waters and giving Iran the pretext to seize them.

It is also claimed that Iranian military boats are “spoofing” the automatic identification system (AIS) used by commercial ships, posing as merchant ships.

Neither US officials nor Iran have commented on the accusations of GPS jamming.

The Maritime Administration, an agency within the US Department of Transportation, issued a warning on Wednesday to commercial vessels operating in the Persian Gulf, Strait of Hormuz, and the adjacent Gulf of Oman.

Officials warned that ships may encounter “GPS interference, bridge-to-bridge communications spoofing, and/or other communications jamming with little to no warning”.

They reported that GPS interference was thought to be used in at least two of the recent incidents with vessels in the area. “One vessel reportedly shut off its Automatic Identification System (AIS) before it was seized, complicating response efforts,” read the statement. “Vessels have also reported spoofed bridge-to-bridge communications from unknown entities falsely claiming to be US or coalition warships.”

On 19 July, Iranian commandos seized a British-flagged oil tanker, the Stena Impero, saying it had collided with a small Iranian fishing boat and injured its crew. According to Press TV, the tanker ignored distress calls from the boat and instead turned off its transponder.

Following the seizure, British intelligence agencies have reportedly investigated the theory that Russian spies could have spoofed the ship’s GPS receivers and steered it into Iranian waters – something Russian officials described as “paranoia”.

Iran has also seized a Panama-flagged tanker and what it believed to be an Iraqi tanker, for allegedly smuggling Iranian fuel to foreign customers.

Panama confirmed that its ship was engaged in unlawful acts and withdrew its registration, while Iraq denied ties to the other detained vessel.

Iranian boats are said to have tried to impede a British oil tanker on 11 July but were driven off by a Royal Navy warship, according to the UK Ministry of Defence.

The series of incidents began shortly after a tanker carrying Iranian oil was impounded off Gibraltar by the UK, in a move strongly criticised by Tehran. Gibraltar authorities suspected the tanker of transporting oil to Syria in breach of international sanctions, but Iran insists the tanker did nothing wrong.

This has only deepened a crisis between Iran and Western countries, aggravated by the United States’ “maximum pressure policy” which is aimed at halting Iran’s oil exports and bringing it to the negotiating table.

The US pulled out of the 2015 nuclear deal, which curbed Iran’s nuclear programme in exchange for the removal of economic sanctions, claiming that Iran breached the deal and sponsored terrorism in the Middle East.

Iran and the remaining signatories – Russia, China, the UK, France, and Germany – have all condemned the move and pledged to stick to the agreement. Iran delivered on its promise for a year but stared scaling back some of its commitments in May, saying that the European powers have failed to shield it from crippling US sanctions.