The deal, concluded on July 14, 2015, provides for the gradual lifting of the economic and financial sanctions imposed on Iran by the United Nations Security Council, the United States and the European Union in exchange for Tehran's guarantees that the country's nuclear program would remain peaceful.

Under the JCPOA, Iran agreed to long-term restrictions on all uranium enrichment activities, as well as research and development in this area for eight years.

In particular, Iran was obligated to start phasing out its IR-1 centrifuges, which used to enrich uranium — a nuclear weapons component — over a ten-year period.

In this context, Tehran pledged to keep no more 5,060 IR-1 centrifuges at the Natanz enrichment facility and promised that excess centrifuges and enrichment-related infrastructure would be kept under a watchful eye of the International Atomic Energy Agency (IAEA).

© AP Photo / Kazem Ghane
International Atomic Energy Agency (IAEA) seal on a piece of equipment at one of Iran's uranium enrichment facilities at the Natanz plant, some 200 miles (322 kilometers) south of the capital Tehran, Iran. (File)

Tehran is also obligated to carry out its uranium enrichment activities, including research and development, exclusively at the Natanz facility.

At the same time, Iran was to convert its fuel enrichment facility in Fordow into a nuclear, physics and technology center. Tehran also promised to reduce its stockpile of low-enriched uranium to 300 kilograms (661 pounds) and keep it that way for 15 years.

The deal stipulates that an excess amounts of uranium must be sold and delivered to a foreign buyer in exchange for natural uranium.

All remaining uranium oxide enriched to between 5 and 20 percent will be used to produce fuel for the Tehran Research Reactor.

Iran will redesign and rebuild a heavy-water reactor in Arak, based on an agreed conceptual design project, using fuel enriched up to 3.67 percent. Iran will redesign the reactor so it would not produce any weapons-grade plutonium. The reactor will support nuclear research for peaceful purposes and radioisotope production for medical and industrial purposes. All spent nuclear fuel from Arak must be exported outside of Iran during the reactor’s entire lifetime.

Iran will not build additional heavy-water reactors or accumulate heavy water for 15 years. All excess volumes of heavy water will be exported to the international market. Iran must export all spent nuclear fuel from all future and existing power and research nuclear reactors.

According to the text of the JCPOA, Iran gives the IAEA permission to implement transparency measures, which include the long-term IAEA presence in Iran; IAEA monitoring of uranium ore and uranium concentrate, processed and produced by all Iranian enterprises for 25 years; surveillance of centrifuge rotors and bellows for 20 years; the use of IAEA approved and certified modern technologies and others.

The IAEA Board of Governors held an urgent session on December 15, 2015, and adopted a resolution prepared by six international mediators guided by the Russian draft. The resolution lays the legal basis for the IAEA verification activities for the JCPOA period.

This was made possible thanks to the IAEA report confirming that Tehran had brought its nuclear program in line with the Plan of Action.

In particular, Iran reduced its uranium enrichment capacity at the Natanz plant to 5,060 centrifuges, dismantled all other centrifuges and related infrastructure, placing them into storage under IAEA supervision. The reserves of uranium enriched to 5 percent were reduced to the limit of 300 kilograms, and surplus of uranium was shipped to Russia. Iran also dismantled the active zone of an unfinished heavy water reactor in Arak.

In response to Iran’s implementation of these nuclear measures, the UN Security Council revoked all acting resolutions concerning Iran (some restrictive measures remained in place, but they are introduced through a separate annex to resolution 2231), put in place measures to lift UN sanctions that targeted Iran’s nuclear program (mainly financial sanctions, but also those which affected the interests of third countries), and restrictive measures by the European Union.

UN Security Council restrictions on the export of all weapons from Iran and on deliveries of seven categories of arms defined by the United Nations Register to Iran were to remain in place until 2020.

Until 2025, a special "supply line" of nuclear and dual use items to Iran will operate under the relevant lists of the Nuclear Suppliers Group.

The resolution provides a mechanism for the possible restoration of sanctions in case one of the JCPOA participants considers that Iran is not fulfilling its obligations under the Action Plan. However, the re-imposition of sanctions is possible only if sound arguments are provided to the Joint Commission on the Iran nuclear deal.

Since the JCPOA was concluded and brought into force, the IAEA has quarterly confirmed strict compliance by Iran with its obligations under the Action Plan, with the last confirmation received on May 31, 2019.

On June 10, 2019, IAEA Director General Yukiya Amano stated that the agency continued to ensure that nuclear materials declared by Iran under the IAEA Safeguards Agreement were not used for improper purposes, and continued "its evaluations regarding the absence of undeclared nuclear material and activities in Iran." 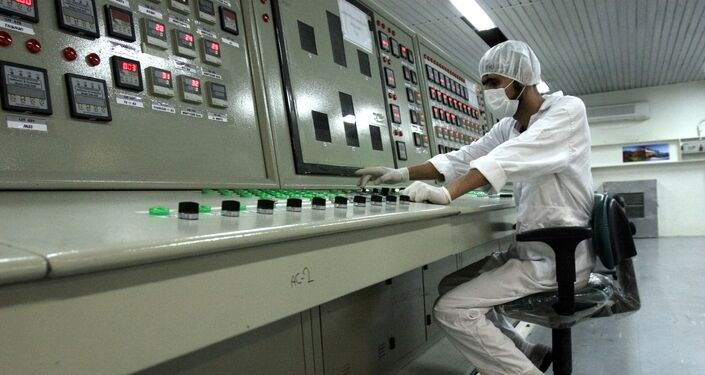 At the same time, with the arrival of the new US administration, the implementation of the JCPOA faced a serious challenge. Even before his election, US President Donald Trump harshly criticized the agreement, calling it "the worst deal ever" and did not rule out that the United States will withdraw from the Iran nuclear deal, if the deal could not "be fixed."

In his remarks on Iran strategy on October 13, 2017, Trump once again trashed the JCPOA as the worst deal ever, claiming that the agreement gave Tehran much-wanted sanctions relief in exchange for nothing more than a short-term delay in the development of the country's nuclear program.

The US president also accused Iran of sponsoring terrorism and preventing international inspectors from properly verifying the country's compliance with the nuclear deal.

In this context, Donald Trump announced on May 8, 2018 that the United States would withdraw from the JCPOA and restore its Iran sanctions, which were lifted by Washington as part of the nuclear deal. The restrictions target not only Tehran itself but also other countries that continue to do business with Iran.

The remaining JCPOA signatories slammed the United States' move and reaffirmed their commitment to respect their obligation under the deal with Iran.

In December 2018, UN Secretary-General Antonio Guterres expressed his regret about Washington's decision to withdraw from the deal and restore the sanctions, saying that it was a serious challenge that it would not help achieve the goals set by the agreement.

After the US withdrawal from the nuclear deal, France, Germany and the United Kingdom decided to create a joint mechanism to continue doing business with Iran even under US sanctions. The three countries announced on January 31 that the mechanism, dubbed Instrument in Support of Trade Exchanges (INSTEX), had been set up.

The situation further deteriorated on the one-year anniversary of the US withdrawal from a nuclear deal on May 8 when Iran announced that the country would too cease the implementation of a number of obligations under the JCPOA, in particular those related to restrictions on the stocks of heavy water and enriched uranium.

Tehran substantiated its decision by arguing that the United States had breached the JCPOA and imposed sanctions, all the while the remaining JCPOA signatories failed to appropriately deal with the situation.

In this context, Iran gave China, France, Germany, Russia and the United Kingdom 60 days to find a way to protect Tehran's interests from Washington's actions, pledging that the country would once again start fulfilling its obligations if the condition was met.

At the same time, Iran warned that should the remaining JCPOA signatories fail to ensure Iran's protection by the end of the deadline, which expires on July 7, the country was ready to resume the construction of the Arak Heavy Water Reactor Facility, which was suspended under the nuclear deal, and renege on uranium enrichment restrictions.

Secretary General of the European External Action Service Helga Schmid said on June 28 that the mechanism had been made operational and the first transactions were already underway.

During the first phase, the mechanism is set to ensure the delivery of medicines, medical equipment and agricultural products, but Tehran wants INSTEX to help the country export oil, which is one of the pillars of the Iranian economy, under the US restrictions.

The United States then called on Iran to stop the entire enrichment process, and the UN secretary general urged Tehran to continue to fulfill its obligations under the JCPOA.

French President Emmanuel Macron joined the calls on July 2, calling on Iran to immediately reduce its stock of low-enriched uranium.

Russia has consistently advocated for maintaining the JCPOA, and expanding economic and financial cooperation with Iran, despite the US sanctions. At the same time, Russian Foreign Minister Sergey Lavrov Russia urged Iran on July 2 to show restraint in that situation and respect key provisions of the agreement.

Lavrov also said that not a single transaction had been carried out with the help of the French-German-UK mechanism as of July 2.

Iranian President Hassan Rouhani invited Washington on July 3 to engage in negotiations and start complying with the JCPOA. The Iranian leader said that the country would be fully implementing the deal once the other parties start doing the same.

France, Germany and the UK Remain 'Fully Committed' to Maintaining the JCPOA