'People of Poland Like Me': Trump Bewilders Netizens With Bizarre Rant on WWII's Warsaw Uprising 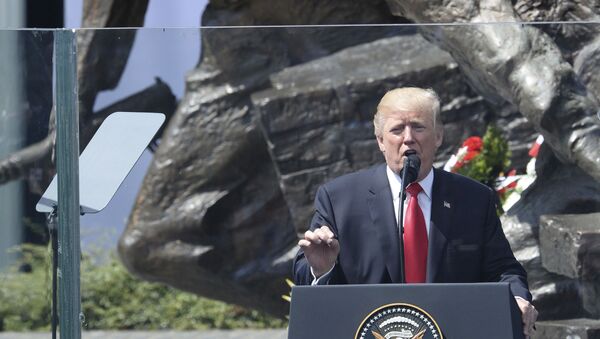 © AP Photo / Alik Keplicz
Subscribe
A seemingly normal question about the Warsaw Uprising addressed to the US president at the White House has prompted a Twitter storm, as some considered his answer to be tone-deaf and too self-centred. Even one of Trump’s old critics, his adviser Kellyanne Conway’s husband George, weighed in to trash the commander-in-chief.

Donald Trump has come under fire on social media for his response to a question about the 1944 Warsaw Uprising anniversary, which he dedicated to his relations with Poland. When he was asked about his message for an August event commemorating the liberation of the Polish capital from the Nazis, he wandered away from the topic of the Polish resistance’s brave deeds.

“Well, I have a lot of respect for Poland. And, as you know, the people of Poland like me, and I like them. And I’m going to be going to Poland fairly soon. And I know they’re building an installation that — and they’re putting in all of the money — 100% of the money. So they’re building something very nice for the United States to have”, he said.

He did not elaborate on what “installation” he was referring to, but some media outlets linked his statement to facilities that the Polish government is planning to build for an additional 1,000 troops, expected to be deployed by the US. Warsaw has pledged to fund the construction, as Trump earlier stated, with Poland even considering naming the base “Fort Trump”.

Social media users trashed the US president, branding the response a “parody” and even suggesting that Trump had no clue what he was talking about.

Completely beyond parody: Asked if he has a message for Poland on the anniversary of the Warsaw Uprising, Trump says, "I have a lot of respect for Poland, and as you know the people of Poland like me. And I like them. And I'm going to be going to Poland fairly soon." pic.twitter.com/jGd0xNJIH4

Right. The Warsaw uprising was a celebration of Donald Trump. https://t.co/lJUa8Aej9w

​Some even joked that the former real estate mogul thought that “uprising” means some sort of construction project.

Trump probably thinks that the Warsaw Uprising is a new building project. https://t.co/zXIA2izdcg

​Others reproached him for being self-centred and having poor knowledge of history.

The Warsaw Uprising was a revolt of the Polish people against the tyranny of the NAZI occupation.

When asked about the Warsaw Uprising, Trump said nothing other than that the Polish people loved him.

Once again, he makes it all about him.

​One of them was George Conway, husband of Trump’s adviser Kellyanne, who has clashed with the US president on several occasions. He reminded his followers that POTUS even gave a speech in front of the Warsaw Uprising monument in 2017 when he visited Poland.

000000
Popular comments
arcsmith, Biggest debtor nation in the EU, with regards, expecting the rest of the EU to finance their projects.
anne00marie
3 August 2019, 20:15 GMT4
000000
It is highly debatable whether or not "Poland liking you" is a good thing, as they are one of the most servile nations in eastern europe.