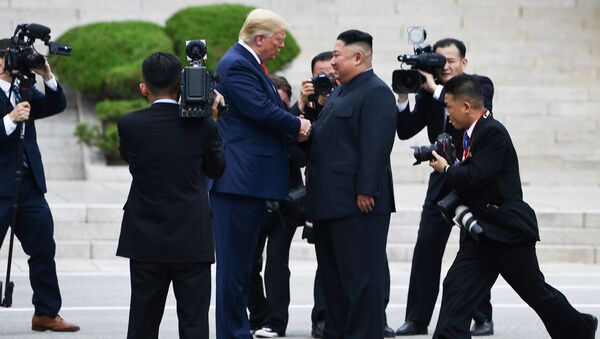 MOSCOW (Sputnik) - US President Donald Trump in an interview with Fox News has downplayed the recent missile launches by North Korea, saying Washington and Pyongyang have been "doing very well".

The US president was asked if he would "devastate" Iran and North Korea if they "force him to", in the wake of recently reported missile launches by the two countries.

"In the case of North Korea, I am actually getting along very well with [Kim]. But we'll see what happens. The sanctions are on. The hostages are back. We're getting the remains back. They haven't done nuclear testing. They really haven't tested missiles other than, you know, smaller ones, which is something that lots test. But I think with North Korea, we've been doing very well", Trump stated.

On Thursday, North Korea fired two projectiles from an area close to the eastern coastal city of Wonsan. The South Korean Joint Chiefs of Staff subsequently said that the launches were two short-range missiles that flew around 267 miles at an altitude of 31 miles before falling into the Sea of Japan. On Friday, North Korean state-run media reported that the launches were tests of a new tactical guided weapon, observed by chief Kim Jong-un.

According to them, Pyongyang carried out the launches on Thursday as a warning to South Korea against boosting its military.

The incident took place less than a month after a meeting between Kim and Trump at the Demilitarised Zone (DMZ) between the two Koreas. During the meeting, the two heads of state agreed to energize their deadlocked denuclearisation talks by engaging in working-level contacts.