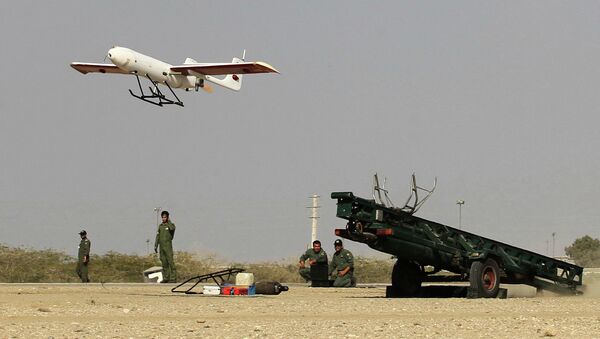 US President Donald Trump claimed on Thursday that a US warship destroyed an Iranian drone in the Strait of Hormuz after the aircraft ignored multiple warnings to stand down.

Later on Thursday, Iranian Foreign Minister Mohammad Javad Zarif told reporters at the UN in New York that Tehran has no information about a drone being downed by the United States.

"We have no information about having lost the drone today", Zarif said.

Trump characterized the alleged actions of an Iranian drone as a hostile and provocative action against vessels operating in international waters, adding that the United States has the right to defend itself, its facilities and interests.

The Pentagon said in a statement that an Iranian drone came within "threatening range" of a US warship in the Strait of Hormuz before being destroyed by American forces in a defensive action.

The situation in the Persian Gulf and adjacent areas has noticeably worsened over the past couple of months as several oil tankers were hit by explosions of undetermined origin. The United States and its allies blamed Iran for the incidents. The Iranian military then reported that it had downed a US drone, saying it had violated Iran airspace.

The United States was reportedly close to undertaking military action against Iran after a US drone was shot down by the Iranian Revolutionary Guards Corps (IRGC), but Trump has repeated that he is open for talks with the Iranian leadership without preconditions.

IRGC Commander Hossein Salami warned on Thursday that Iran’s defence strategy would become offensive in the event of an "error on the part of the enemy".

In May 2018, Trump unilaterally withdrew his country from an international nuclear deal with Iran and began reimposing sanctions on the Islamic republic. In June, Tehran announced that it would begin enriching uranium beyond the 3.67 percent level set in the JCPOA, adding that Tehran would continue to gradually abandon its nuclear commitments every 60 days.

Earlier on Thursday, the US Treasury Department imposed new sanctions on five persons and seven entities over alleged links to Iran's nuclear program.