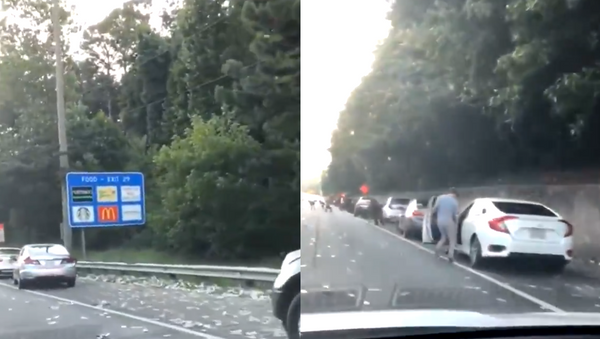 Atlanta, Georgia, generally ranks within the top five cities in terms of terrible, headache-inducing traffic, but some who chose to travel on Interstate 285 on Tuesday evening received an unexpected payout to the tune of some $175,000.

Countless netizens are green with envy after witnessing now-viral videos of dozens of motorists attempting to collect cash lost from an armored vehicle belonging to Canada-based GardaWorld Corporation, which somehow had its door opened while traveling down I-285 on July 9.

Netizens were particularly impressed by the white truck sliding onto the shoulder around the 22-second mark of the first clip.

Yesterday a LARGE amount of money spilled on I-285. 🤑💸💰 pic.twitter.com/wcul2ghiMl

Oh y’all thought I was lyin?
Yes, there was money flying all over I-285!!! #atlanta pic.twitter.com/aAL6e8huGa

The FOMO, or fear of missing out, immediately kicked in for netizens near and far from the capital of Georgia.

Last night, I was NOT driving on 1-285 and free money was flying all over the highway. This morning, I WAS driving on I-285 and a rock flew off of a large truck and cracked my windshield. I just.... pic.twitter.com/37hUwy4LOg

So an armored truck fell over on I-285 and that part of it is super close to where I get on 285 normally..... its pilled money everywhere.... pic.twitter.com/F3nqnecTKf

The only thing I-285 has ever given me is stand-still traffic... https://t.co/oI0wrB7qcC

Me thinking about all that damn money on I-285 I missed out on smfh pic.twitter.com/RYHVTEH6zS

Waiting on an armored truck to have a mishap in my neck of the woods... pic.twitter.com/EQHqgscFYj

Lord, i’ve seen what you’ve done for others lately.... pic.twitter.com/LzCJD9IxgN

Unfortunately, those who cashed in on the payday probably won’t be able to reap the benefits of their seemingly fortunate timing.

"Those people who do not return the money, we have video, we have tag numbers. We have footage of people on the interstate. What we're asking the public to do is bring the money back, don't make us come looking for you, because if we do that, you probably will be charged,” Dunwoody Police Department Sgt. Robert Parsons told local Atlanta outlet WSB-TV 2.

On Facebook, the police department cited “Georgia Code Section: 16-8-6,” which says “a person commits the offense of theft of lost or mislaid property when he comes into control of property that he knows or learns to have been lost or mislaid and appropriates the property to his own use without first taking reasonable measures to restore the property to the owner.”

Following the update, a number of people actually returned cash retrieved from the would-be windfall (much to the confusion of responding netizens).

Though there was certainly an increase in traffic along the already-backed-up interstate, there were no reported crashes or injuries associated with the event, WSB-TV 2 noted Tuesday.

A similar occurrence involving a Brinks truck took place on December 13, 2018, along a New Jersey Highway, with losses totaling around $500,000.

Surprisingly, a total of nearly $320,000 had been returned a week later, reported AP on December 20.