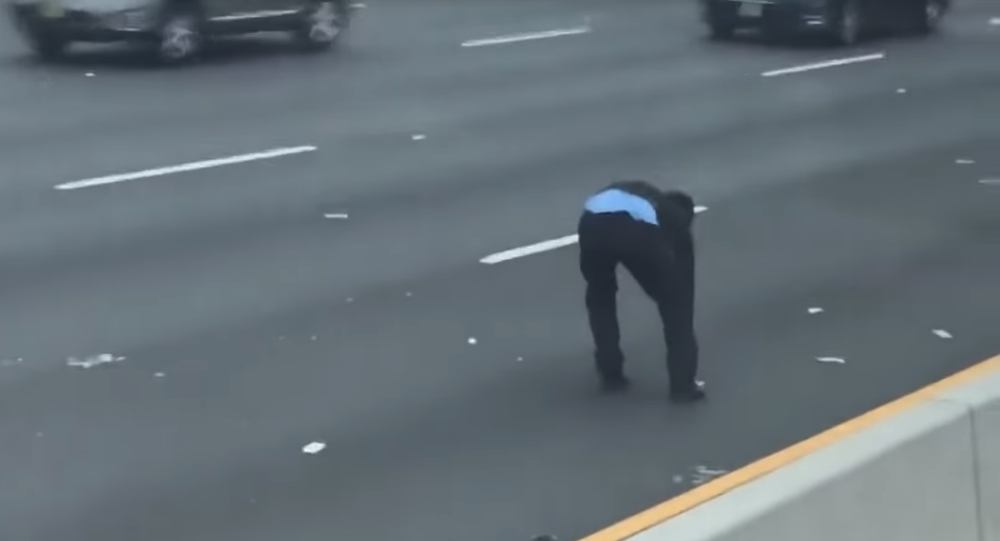 An armored truck spilled cash across a New Jersey highway Thursday morning, sending security guards scrambling to try and grab the flying money. Joining them eagerly were commuters, who parked and ran after the bills. Other drivers recorded the chaos on camera.

According to northjersey.com, the rear door of an armored truck owned by Brink's Home Security malfunctioned and opened Thursday morning, sending money flying across the highway.

A armed truck just got rammed on the high way in New Jersey and cash is going everywhere…..side note. I’m crashing into a brinks truck tommrow around noon. Anyone coming?

​$1, $5 and $100 bills were all seen blowing in the wind on Route 3 in East Rutherford at around 8:30 a.m, a Montclair resident on a nearby bus told northjersey.com.

​Traffic quickly ground to a halt as drivers chased the runaway riches. Police told nj.com that motorists running across the roadway after the drifting dinero had caused multiple accidents.

Brinks Truck accident on Rte 3 near Lincoln Tunnel. Bills scattered all over Hwy. Brinks guy and other drivers stop traffic and scramble for bills. #CantMakeThisUp pic.twitter.com/8cI0pX6qLR

​Drivers can be seen in other footage trying to creep through the crowd of people chasing the capricious cash, with one observer remarking, "It's snowing money!"

​In one video uploaded on Instagram from what appears to be a bus, a woman says, "This is like a movie… you don't think this [could] really happen!"

"We don't know how much was lost," East Rutherford Police Lt. William Lorenc told nj.com. "They're doing an audit now."

2 Armored Car Guards Kill Each Other in St. Petersburg – Investigators