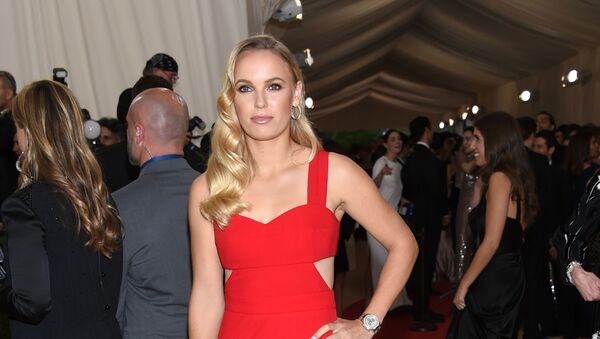 As the first week of Wimbledon 2019 has tennis fans following news from the courts, Danish tennis ace Caroline Wozniacki, a former world number one, has created a stir ahead of her second round match against Russia’s Veronica Kudermetova.

A naked “body confidence” photoshoot of the lovely blonde dated two years ago has resurfaced, when Caroline daringly stripped for ESPN The Magazine's Body Issue.

In the explicit photoshoot Caroline is shown with nothing but the tennis racket she is brandishing, joining fellow athletic beauties for ESPN’s body issue to celebrate sporty and natural physiques.

At the time Caroline said: “Proud and excited for this one!"
“Thank you ESPN Body for the cover.”

“If I don’t look like a supermodel on the runway, that’s okay because I look good in my own way,” she told the Daily Star at the time.
The Danish tennis player added she refused to stress about how she looks, adding:

“I rarely stand on a scale to be honest.”
“When I stop playing, I’m not going to obsess so much about my weight.”
“It’s going to be more about a healthy lifestyle. It’s more about how I feel.”

Always extremely popular with tennis fans, the buoyant and good-natured Caroline Wozniacki was engaged to Northern Irish golf superstar Rory McIlroy before he broke off their relationship in 2017.

We had a small religious ceremony with our families, to start the weekend off, in the chapel at Castiglion Del Bosco. Wearing my @stellamccartney dress! 📸 @paulwhitephoto Makeup: @clarissalunanyc Hair: @daynagoldstein

Danish tennis celebrity Caroline Wozniacki, 28, won her maiden Grand Slam title at the 2018 Australian Open. She enters this year’s Wimbledon event ranked as an outsider, as she has failed to replicate her Grand Slam success.

Caroline celebrated a hard-fought 7-6, 6-3 victory over Veronika Kudermetova in round two, gaining revenge for her defeat at the hands of the Russian player in the first round of the French Open last month.
Wozniacki will play Zhang Shuai of China in the third round of Wimbledon.

000000
Popular comments
the aim of Tennis is to win and win quickly. Especially if you have the skill-set to produce many ACES. However, with this young lady, a Second Serve would not be such a bad thing. :)
Terry-Dactul
4 July 2019, 10:07 GMT1
000000
She has always come across as a warm caring person which has endeared her too her fans. Nothing changes that .

wallybob
4 July 2019, 11:29 GMT1
000000
Newsfeed
0
New firstOld first
loader
LIVE
Заголовок открываемого материала
Access to the chat has been blocked for violating the rules . You will be able to participate again through:∞. If you do not agree with the blocking, please use the feedback form
The discussion is closed. You can participate in the discussion within 24 hours after the publication of the article.
To participate in the discussion
log in or register
loader
Chats
Заголовок открываемого материала
Worldwide
InternationalEnglishEnglishMundoEspañolSpanish
Europe
DeutschlandDeutschGermanFranceFrançaisFrenchΕλλάδαΕλληνικάGreekItaliaItalianoItalianČeská republikaČeštinaCzechPolskaPolskiPolishСрбиjаСрпскиSerbianLatvijaLatviešuLatvianLietuvaLietuviųLithuanianMoldovaMoldoveneascăMoldavianБеларусьБеларускiBelarusian
Transcaucasia
ԱրմենիաՀայերենArmenianАҧсныАҧсышәалаAbkhazХуссар ИрыстонИронауОssetianსაქართველოქართულიGeorgianAzərbaycanАzərbaycancaAzerbaijani
Middle East
Sputnik عربيArabicArabicTürkiyeTürkçeTurkishSputnik ایرانPersianPersianSputnik افغانستانDariDari
Central Asia
ҚазақстанҚазақ тіліKazakhКыргызстанКыргызчаKyrgyzOʻzbekistonЎзбекчаUzbekТоҷикистонТоҷикӣTajik
East & Southeast Asia
Việt NamTiếng ViệtVietnamese日本日本語Japanese俄罗斯卫星通讯社中文（简体）Chinese (simplified)俄罗斯卫星通讯社中文（繁体）Chinese (traditional)
South America
BrasilPortuguêsPortuguese
NewsfeedBreaking
13:09 GMTBlast Kills Taliban Intelligence Officer in Eastern Afghanistan, Source Says
13:00 GMTGermans Head to Polls to Choose New Bundestag
12:51 GMTDozens of New Yorkers Stage Anti-Vaccine Protest at a Food Court Chanting F**k Joe Biden
12:41 GMTFour Inmates Dead, One Injured in Attempted Jailbreak in Philippines, Reports Suggest
12:40 GMTVirginia Giuffre to Reportedly Hand Prince Andrew Secret Doc Able to Defeat Her Lawsuit
12:37 GMTRussia Scrambles Three Su-35 Jets to Escort US B-52 Bomber Approaching Border in Pacific Ocean
12:32 GMTCyclone Gulab Likely to Make Landfall in India on Sunday Evening
12:21 GMTUN Chief Warns 'Humanity Unacceptably Close to Nuclear Annihilation'
12:09 GMTKremlin Says It Hopes for Consistency on Minsk Agreements From Germany After Merkel Leaves
12:02 GMTRussian Presidential Spokesman Says Gazprom Fulfilling All Obligations
11:54 GMTLabour Leader Says It's 'Not Right' to Say Only Women Have a Cervix
11:43 GMT'F**k Them': Carlson Responds to Yet Another Call to Fire Him Over 'Great Replacement' Theory
11:42 GMT'Piece of Scum': UK Labour Deputy Leader Lashes Out at Tories
11:14 GMTUK Transport Minister Calls on Britons to Behave Normally, Says There is No Shortage of Fuel
11:12 GMTHamas Has No Place in Sudan But Will It Give Up on Former 'Base'?
11:05 GMTJapan Should Look Into Having Nuclear Submarines, Candidate for Ruling Party Head Says
11:05 GMTIsraeli Soldiers Shoot Down Nazi Flag Raised Near Outpost in West Bank - Photo, Video
10:52 GMTTaiwan Strait Situation 'Complex and Grim', Xi Jinping Says as He Calls for 'National Reunification'
10:46 GMTHillary Clinton Urges to Call Her 'Madam Chancellor', But Netizens Come Up With Other Names
10:39 GMTGerman Green Party Might Find Some 'Rare Lizards' to Stop Nord Stream 2, AfD Co-Chair Warns