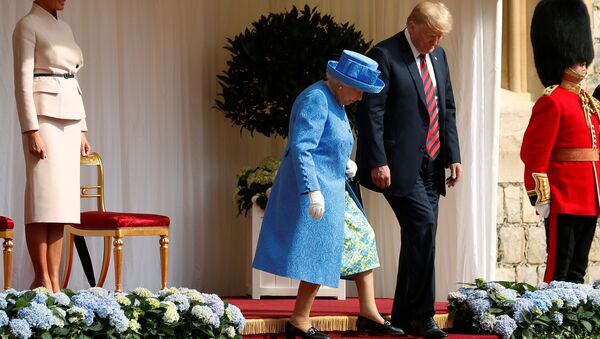 © REUTERS / Kevin Lamarque
Subscribe
International
India
Africa
US President Donald Trump’s three-day visit to the UK next week is packed with pre-planned private meetings, photo-ops and press conferences, but in numbers comparable to last year’s demonstrations, thousands of protesters will take to the London streets to make sure their own agenda is heard as well.

Trump's trip to London will not be a simple, police-escorted walk in the park if various protest groups get their way beginning Monday.

In preparation for the US president's presence in London, Scotland Yard has dropped an estimated £18 million in public funds on security, including the deployment of 10,000 officers, the largest showing since the 2011 riots in London, reports iNews.

Despite the uptick in officers, Scotland Yard predicts a similar demonstrator turnout to last year's 250,000.

One group plotting to follow the president around the city is the aptly named "Stop Trump Coalition." In addition to their demonstration at Buckingham Palace — Trump's first stop — the organization currently has 18 other protests or anti-Trump related events scheduled around the country.

Similar organizations, such as "Together Against Trump" and "Stand Up to Trump" have also scheduled events with thousands of RSVPs.

Last year, after hundreds of thousands of demonstrators protested Trump's presence with the notorious baby blimp depicting the US resident as a bloated, orange infant with his mouth agape, the leader did not have many positive things to say about England's capital.

"I used to love London as a city," Trump told UK tabloid The Sun in 2018. "I haven't been there in a long time. But when they make you feel unwelcome, why would I stay there?"

To beat the crowds and avoid protesters, Trump and his officials are bringing the presidential car (nicknamed "The Beast") as well as the Marine One helicopter, says the US Embassy.

Though it may be easy to turn away from a Trump balloon, a showering of milkshakes may be a little more difficult to ignore. Facebook group "Milkshakes Against Racism" is staging a "peaceful protest" against fascism and the far-right on Tuesday morning.

Nigel Farage, who just earlier this month fell victim to a milkshake and was even held captive by teens with more shakes, is expected to privately meet with Trump during his visit.

While the event states they do "not condone any violence or illegal activities," there may be some ice cream flung. Protesters may have to make their shakes at home, as it's possible police will force area restaurants to pause milkshake sales while 45 is in town.

Earlier this month, Sputnik reported another possible protest piece, as "Dino" Don Lessem released video of his 16-foot animatronic Trump on a golden toilet that he commissioned from a Chinese company for $25,000. If shipment goes as planned, the statue should be in the UK around the same time as its inspiration.