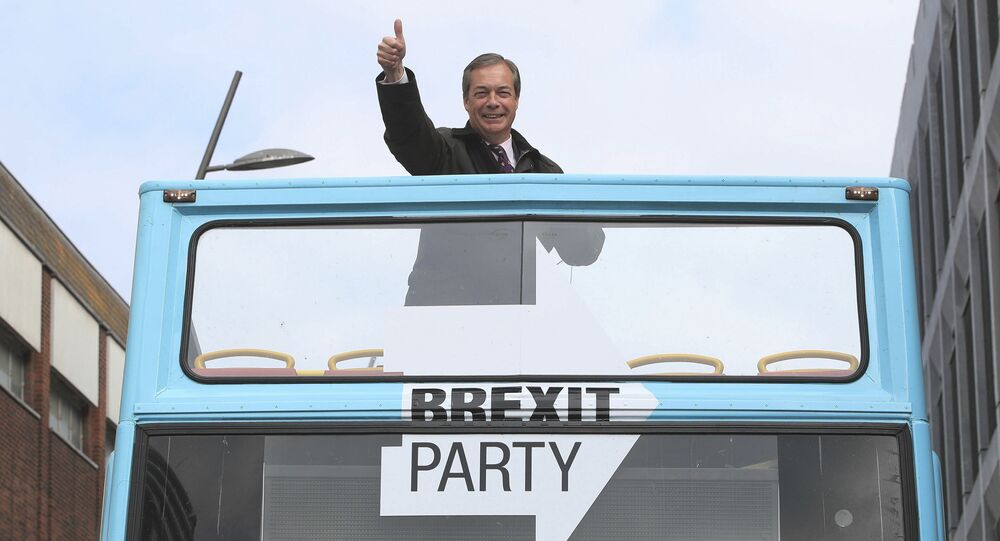 Earlier this week, the former UKIP leader was attacked with a sweet, creamy, frozen drink in Newcastle. Is this going to become a new UK political tradition?

Nigel Farage, the leader of UK Brexit Party and former leader of UKIP party, was reportedly "trapped" inside his campaign bus in Rochester during his trip around Kent County Wednesday. Farage, whose recently formed Brexit party is reportedly leading opinion polls, is now on tour around the UK ahead of European Parliament elections scheduled for Thursday, a report by The Sun says.

According to the report, the politician stayed inside his bus "for ages" after his security team spotted three young men in balaclavas carrying milkshakes.

@Nigel_Farage is stuck on his #Brexit bus because people have turned up with milkshakes: https://t.co/1QDpI9hI36 The driver of the vehicle, Michael Botton, told @kentlivenews 'There are a couple of guys standing over there with milkshakes, they were going to throw them over him. pic.twitter.com/R6jXYsXMab

​"There were a couple of guys standing with milkshakes, they were going to throw them over him," the bus driver told reporters. "But the police were there, we've spotted them and now Nigel isn't getting off the bus."

Earlier this week, Farage was covered in milkshake after a protester threw the drink at him in Newcastle.

Kent Live reports that eventually Farage did get off his bus, but preferred to stay close to the vehicle as he talked to his supporters — a contrast to his trademark habit of walking down the street in the open.

"He was stuck on the bus for ages and wouldn't come off," Kent Live reporter Will Rider said, according to The Sun. "Eventually he did come off but he only stepped about a metre away and chatted to some supporters. He got back on the bus very quickly."

Another group of men carrying what is believed to be iced coffee were stopped by the police as they walked towards the bus screaming anti-Farage slogans.

​The Newcastle attack on Nigel Farage was another in a row of similar incidents, which also targeted Former EDL leader Tommy Robinson and UKIP candidate Carl Benjamin during the last few weeks.

The attacks have been condemned by UK politicians, with the Brexit minister James Cleverly calling for a civilized debate instead of "assaulting political opponents."