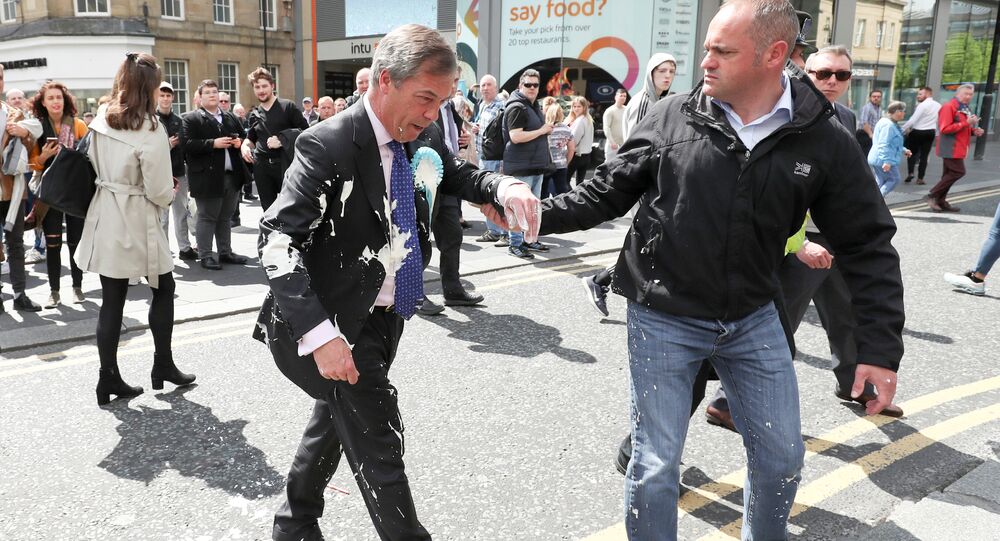 The European elections are taking place across the EU on 23 May and the Brexit Party is expected to do extremely well. Their leader Nigel Farage is on a tour of the UK.

Nigel Farage has been hit by a milkshake after being attacked by a Remainer in the centre of Newcastle.

The Brexit Party leader was overheard muttering: "How did that happen?" and telling his bodyguards it had been a "failure".

Nigel Farage hit by a milkshake in Newcastle city centre. He’s furious. Telling his security “it’s a failure” and “how did that happen”. He’s just been whisked away in a car. Full story on https://t.co/YZjeNpfVJw soon. pic.twitter.com/FpXDS8cGTG

​The milkshake in question was no ordinary cheap shake — it was a £5.25 variety banana and salted caramel variety from burger chain Five Guys.

Brexit Party leader Nigel Farage hit by a 'banana and salted caramel milkshake' thrown by a protester in Newcastle pic.twitter.com/usBtF7VAVe

​On Sunday, 19 May, Burger King was accused of "endorsing violence" after reminding customers in Scotland that it sells milkshakes.

McDonald's was also ordered to stop selling the drinks near a rally Farage held in Edinburgh on Friday, 17 May.

Sadly some remainers have become radicalised, to the extent that normal campaigning is becoming impossible.

For a civilised democracy to work you need the losers consent, politicians not accepting the referendum result have led us to this.

​It followed former EDL leader Tommy Robinson being hit by two milkshakes earlier this month and Ukip candidate Carl Benjamin being doused in milkshake for the fourth time on Sunday while out and about in Salisbury.