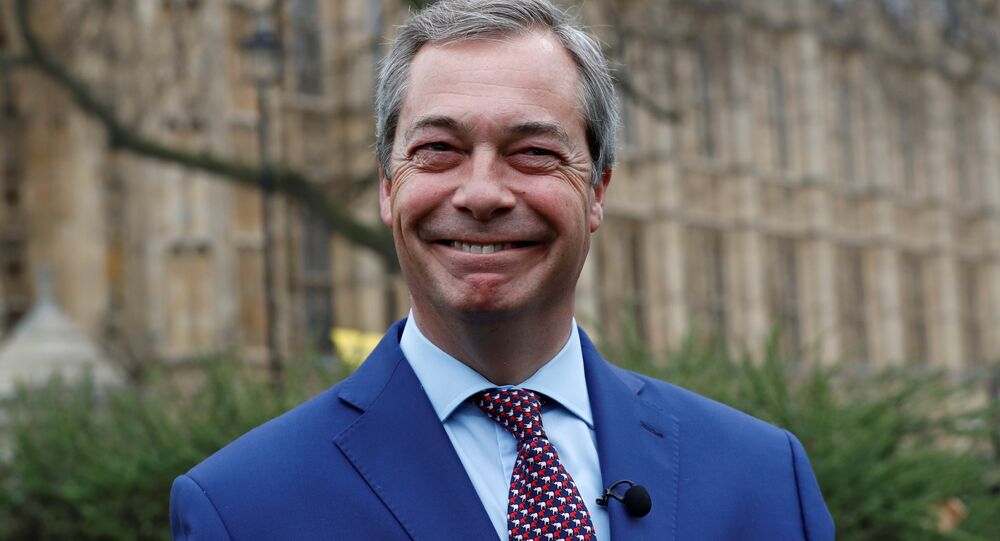 The incident does not mark the first time that Mr Farage has faced hostility in Scotland. Back in 2013 as the leader of UKIP he was barricaded in a pub on Edinburgh’s famous ‘Royal Mile’ as protests heckled and shouted from outside.

Fast food giant Burger King has denied that it was inciting violence against Brexit Party leader, Nigel Farage, after it broadcast to customers in Scotland via Twitter that milkshakes would be on sale "all weekend."

The American burger joint's initial Tweet, which was put out on Saturday, May 18 read, "Dear people of Scotland. We're selling milkshakes all weekend. Have fun. Love BK."

© Sputnik / Natalia Seliverstova
McDonald's Put Milkshakes on Hold During Farage Rally Following Police Request Due to Food-Pelting Incidents
The announcement came hot on the heels of a string of incidents in which UKIP candidate Carl Benjamin and anti-Islamist right-wing activist Tommy Robinson both had milkshakes thrown over them — the latter twice — by activists who oppose their political positions.

Fears that the same milky fate might have awaited Mr Farage during his visit to Edinburgh, Scotland, at the weekend culminated in a decision by local McDonald's branches to cease selling ice cream and milkshakes for the day.

Mr Farage held a rally at the Edinburgh Corn Exchange on Friday, May 17, when a McDonald's about 200 metres away reportedly pinned a sign up in its window that read: "we will not be selling milkshakes or ice cream tonight, This is due to a police request given recent events."

Burger King's decision not to follow in the footsteps of its major market competitor and its subsequent announcement that it would continue selling milkshakes led some to see this is an endorsement to violence against Mr Farage.

Yet, in a second Tweet, Burger King emphasised that, "we'd never endorse violence — or wasting our delicious milkshakes! So enjoy the weekend and please drink responsibly."

Some however, weren't so impressed by Burger King's sense of humour.

There were however, those on the other hand, who defended the Tweet.

Jeez, a lot of sensitive people in the replies. All they want is for people to have milkshakes, they never advocated lobbing them at certain kinds of people, that’s down to you;) (anyone who takes being covered in milkshake so serious should really reflect upon themselves).