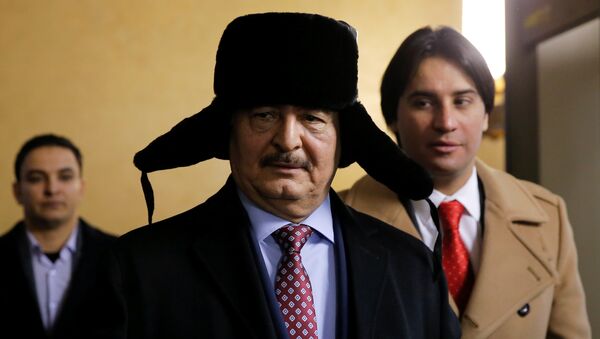 US Secretary of State Mike Pompeo demanded an "immediate halt" to the fighting in Libya this week after Libyan National Army (LNA) forces loyal to Field Marshal Khalifa Haftar began an offensive against the Government of National Accord (GNA) capital of Tripoli.

Retired Army Brigadier General Don Bolduc, former commander of the US Africa Command's counterterrorist special operations forces in Libya between 2015 and 2017, has accused the Pentagon and diplomats in Washington of disastrously failing in their efforts to cultivate relations with Haftar, the general whose forces have taken broad swathes of Libya in recent years and now set their sights on the GNA capital.

"We kind of botched it at every single level, both on the [Pentagon] and the Department of State side, the US policy side, on how we should have been dealing with this guy," Bolduc told Yahoo News.

"We should have been a whole heck of a lot more aggressive in supporting Haftar than we were," Bolduc lamented. "Where's the US? The Russians are supporting him, the US is nowhere to be seen, so we're going to lose strategic influence," Bolduc said.

The officer recalled that US special forces in Libya were banned from cooperating with Haftar's forces in mid-2016, and limited to providing only 'advisory' assistance to the GNA. Another problem, Bolduc noted, was Haftar's resistance to submitting to GNA authority, with the officer recollecting a meeting between the field marshal and US officials.

"He goes, 'Hey, I'm not going to attach myself to a drowning man'," Bolduc recalled. Tripoli "had to give him certain assurances about what his position would be, and all he wanted was to be in charge of the whole military. They just wouldn't do it," he added.

A second former AFRICOM official who asked to remain anonymous confirmed Bolduc's assessment, telling Yahoo News that the US' Libya policy "was really jacked up" during the Obama presidency, with "indecision – the attempt first not to pick sides and then pick sides" plaguing policymakers all the way to the highest levels of government. The official said this policy had carried over to policy under Trump. "I don't believe there's a well-articulated strategy," the former AFRICOM official said.

LNA Warns of Terror Attack on Libya’s ‘Oil Crescent’ Amid Political Standoff
The long-running chaos in Libya escalated earlier this month after Khaftar announced an offensive on Tripoli, prompting a GNA mobilization and counteroffensive. On Tuesday, GNA Prime Minister Fayez al-Sarraj reportedly instructed prosecutors to prepare arrest warrants against Haftar and his LNA allies. The same day, an LNA spokesman accused the GNA of allying itself with terrorist organisations.

Libya collapsed into anarchy in 2011 following a NATO-led campaign of airstrikes in support of rebels seeking to topple the government of long-time Libyan leader Muammar Gaddafi. The turmoil prompted competing militias as well as international terrorist organisations, including Daesh and al-Qaeda, to establish control over wide swathes of the country. The largest militia groups eventually formed two separate governments – the eastern Tobruk-based government, supported by Haftar and the LNA, and the western UN-backed GNA, based in Tripoli.