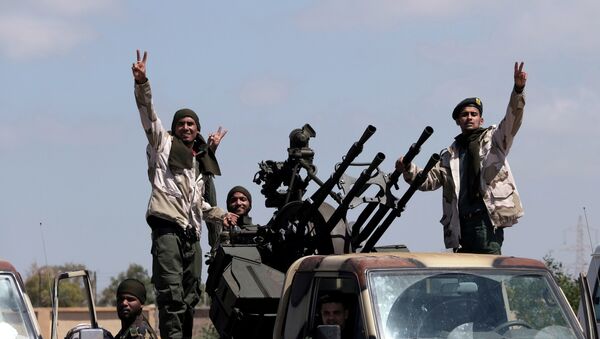 “A very large meeting of terrorist and illegal armed groups took place in [the northern Libyan city of] Sirte today; we know who they belong to and, they have a plan proposed at the meeting on attacking the ‘Oil Crescent’,” Al-Mismari told reporters on Tuesday.

Earlier, he'd pointed the finger at Government of National Accord (GNA) head Fayez al-Sarraj for making a deal with terrorists, and claimed that “there are alliances between the government and terrorist organisations”.

His remarks came after the GNA’s Presidential Council condemned the LNA airstrikes on Mitiga Airport in Tripoli, describing them as “a war crime and a crime against humanity, which is violating all national laws and international agreements and which made sending ill and wounded people to hospitals impossible at this difficult moment”.

READ MORE: US Dragged Libya Into Crisis, Has No Credibility to Lash Out at Haftar – Prof.

Last Thursday, the LNA troops of Field Marshal Khalifa Haftar, a former supporter of Libya’s late former leader Muammar Gaddafi, marched on the capital Tripoli in a bid to wrestle it from alleged “terrorists".

Number of Displaced People in Libya’s Tripoli Reaches 3,400 - UN Agency
Forces loyal to the Tripoli-based and UN-supported Government of National Accord (GNA) said, in turn, that they were launching a counteroffensive operation, dubbed Volcano of Rage.

The Libyan political standoff has been in place since National Transitional Council forces, supported by NATO, murdered the country's former head Muammar Gaddafi in October 2011.

The country was then divided between the parliament, which was elected in 2014 and is based in the city of Tobruk and supported by the LNA, and the GNA, which was formed as part of a UN initiative and controls the western part of the country, including the capital Tripoli.