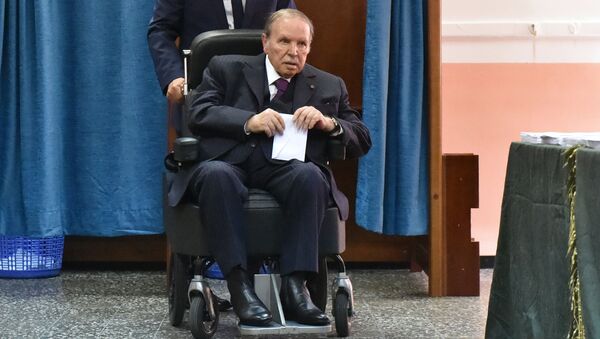 On 26 March, the Algerian Army chief called upon President Abdelaziz Bouteflika to resign, calling the protesters' demands "legal". Speaking to Sputnik, Ali Ghediri, a retired major general and candidate for the delayed presidential elections in Algeria, shared his views on the army's role in the country and ongoing developments.

"I pray to God that the mind may prevail over ambition and stubbornness! If the government cares about the interests of Algeria, the best way out would be [Abdelaziz Bouteflika's] resignation, he must abide by constitutional norms, without prolonging his mandate so that the country would not be in a difficult situation!" Ali Ghediri, a retired major general and candidate for the delayed presidential elections in Algeria told Sputnik France.

He noted that Bouteflika's mandate would expire on 28 March 2019. "On what grounds then will he stay in power?" the politician asked.

Algerian Military Chief Urges for President Bouteflika to Be Removed From Office
On 22 February, anti-government erupted in Algeria after Bouteflika, who has been in power for 20 years, tossed his hat into the ring of the country's presidential election that was initially planned for 18 April. On March 11, the 82-year old president withdrew his bid for re-election to calm the protests and postponed the vote. However, the unrest went on.

Commenting on the ongoing protests, the retired major general said that the government had repeatedly referred to the Islamist threat, warning against the events which led to the Algerian Civil War of the 1990s. According to Ghediri, this is just a pretext weaponised by the government "to limit the right of protesters to protest".

Algerian Army Should Adhere to Constitution

When asked about the potential role of the Algerian People's National Armed Forces in the government's conflict with demonstrators, the politician made it clear that "the current rulers must halt counting on the legitimacy of the power of the bayonets in order to remain in power, as they do".

According to Ghediri, the Algerian Army should stick to the constitution's principles first and foremost.

"One may presume that the army has started to act in this direction", he remarked. "This is what pushed the authorities to organise the elections. Previously, they spoke in favour of extending [Bouteflika's] presidential term through artificial anti-constitutional gimmicks".

Algeria: Will Bouteflika Keep in Mind Joseph Kabila’s Experience?
The retired major general underscored that the army should act in accordance with the constitution without taking sides: "It should support only the people. There is an adjective 'the people's' in its name. It should play the role of a national people's army".

He presumed that "since the elections were postponed in a not very democratic way, it is necessary to find a way out". Ghediri argued that "it should be the least dangerous for the people and as coordinated as possible".

"This solution should contribute to the emergence of a democratic society and the abandonment of the current system", he said.

On 26 March, the Algerian Army chief, General Ahmed Gaid Salah, called upon the president to step down in a speech broadcast by television station Ennahar. He referred to Article 102 of the country's constitution saying that if the health of the president does not allow him to carry out his duties, then the office is to be declared vacant.

On the Path to the Second Republic

Commenting on his decision to put forward his candidacy Ghediri said: "I rely on the people [of Algeria] because I believe in it".

He explained that the essence of his electoral programme is based on two main ideas, namely, a second republic and the rejection of the current system.

"It should be noted that I was right", he said. "I see that the authorities call for the second republic and the rejection of the current system. I am glad to see this".

The politician noted that if he had been asked to give advice to the Algerian president, the army, and the people, he would have told Bouteflika that the president was "an associate of the Mujahedeen and Shuhada, who gave their lives for their country".

"He had the honour of being the last representative of his generation, who ruled our country", Ghediri emphasised. "We must pay tribute to him and make sure that they will remain in history. But since the people demand that he leave his position that he has held for 20 years, he must leave with honour, so that the country will not undergo a time of troubles which will bring no good to anyone".

Over 70 Protesters Reportedly Detained, 11 Policemen Injured in Algeria (VIDEOS)
As for the army, the retired major general said that he would ask Algerian military servicemen to continue fulfilling their constitutional duty and act in accordance with the people's will.

"To the people, I would say that citizens are not merely taking part in demonstrations", Ghediri said. "This is a continuation of the November revolution. This is the same inspiration and the same direction. Algeria was freed from the colonial yoke, but Algerians still have no freedom of speech, no freedom of enterprise, no freedom to choose their rulers. Today, the people want only one thing: to be free, to enjoy their rights and live in a democratic country. The people have voiced their demands in a peaceful and civilized manner. As patriots, we will help it walk the path it has chosen".

Ali Ghediri led the personnel department at the Algerian Ministry of Defenсe for 10 years and resigned in 2015. He became widely known after he published the so-called "Letter to the Elders" in November 2018, in which he called for "rebuilding the nation state" and issued a warning about a possible catastrophe in Algeria, which provoked a storm of criticism from the government. On 3 March, he put forward his candidacy for presidential elections in the Constitutional Council, calling for "breaking ties with the system" and forming a "second republic".