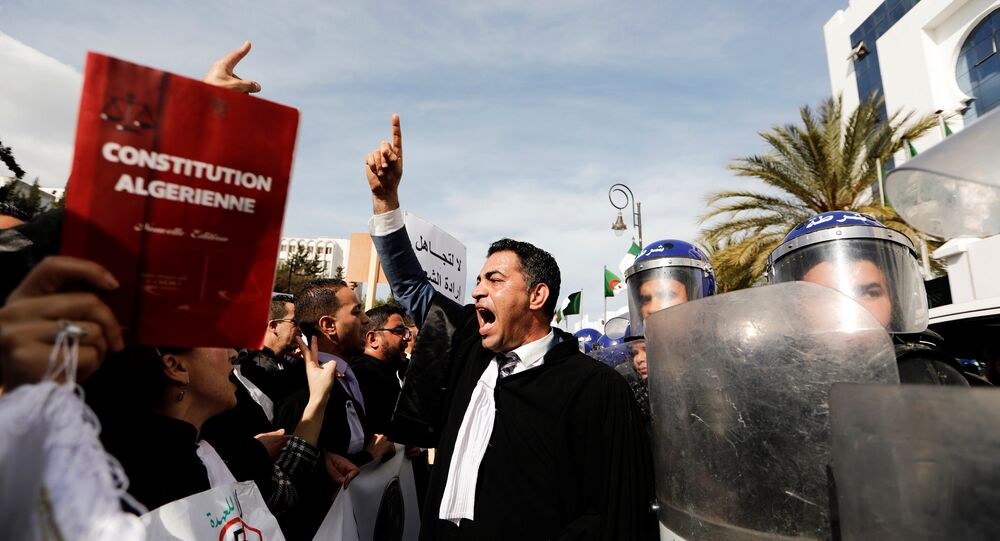 Despite Algerian President Abdelaziz Bouteflika's refusal to seek a fifth term in office, the protests in the country continue to rage on. While the news was initially rather well-received, detractors of the 82-year old president still consider the postponement of the April vote another "manoeuvre" of the authorities, and are demanding nothing less than his immediate resignation.

"The Constitution does not provide for this", Abdelkader Kacher, a professor of constitutional law at Tizi Ouzou University told Sputnik, referring to the delayed vote. "The only thing that the Constitution provides for in Article 110 is a possibility of extending the current presidential mandate when the country is threatened with war."

The Algerian academic explained that "if someone wanted to extend the option for the postponement of the election, it would have already been done, as happened in 1996 in order to parry a constitutional vacuum after the 1992 crisis".

However, "two days before the decision of the Constitutional Council, it has been decided to extend this mandate de facto, against the opinion of the public, which is the source of power".

The academic believes that this "manoeuvre" allows the authorities to circumvent the impossibility of changing the Constitution while the presidential mandate is coming to an end. "Time is not in favour of a constitutional revision, be it in the parliament or through a referendum".

"The members of the constituent power, parliamentary or popular, haven't been informed of this postponement and didn't express their opinion on that issue. To postpone the elections is, in any case, an unconstitutional act. Even if I had heard of attempts to modify the decree of convocation of the electorate, it never went public. What is certain is that the system now lives outside the Constitution, which is actually frozen," the Algerian professor highlighted.

Following in Compaoré and Kabila's Footsteps

It appears that technically, Algeria is trying to follow the example of Congolese judicial practice. In 2016, the President of the Democratic Republic of Congo (DRC) Joseph Kabila had to resign or put in place institutional reforms as the second of his two terms of office provided for in the Constitution was drawing to a close.

© Photo : Alhagie Jobe/ Twitter
Almost 200 Protesters Detained Across Algeria – Reports
Back then, amending the Constitution proved to be quite risky, as Burkina Faso President Blaise Compaoré had had a bad experience attempting to do so. In January 2015, Kabila tried to pass a law that provided for having a general census before presidential elections; it was known that this process could take years. Pressured by popular protests, Kabila had to give up this option, and engage in negotiations with the opposition, through the mediation of the Catholic Church.

The agreement that had been reached granted Kabila a one-year extension, which he de facto extended for another year. Ind the end, the president gave up power, following what was said to be a political negotiation with the least irreducible of his opponents, Étienne Tshisekedi, a prominent opponent of the "system" as they would say in Algeria.

The idea of a "provisional Constitution" of Algeria is not new, judging from the public address delivered by Bouteflika on 4 March 2019 while he was still running for another term.

"If the Algerian people renew their confidence, […] I solemnly take the commitments to God and the Algerian people to hold an inclusive national conference just after the presidential election […] to draft and adopt a new Constitution on the results of a popular referendum […] to organise an early presidential election where I won't be a candidate,"  the 82-year-old politician said.

Yahia Zoubir, a professor of international relations at Kedge Business Scholl in Marseille, suggested that "this is how we can explain the logic of this transition, as imagined by the president."

"On the one hand, it's difficult to find a successor that everyone in the [ruling] 'system' would be happy with", Zoubir said. "On the other hand, we shouldn't underestimate the reality of the psychological character — Bouteflika's determination to die literally in power, the same as Houari Boumediene."

According to the professor, "Bouteflika's supporters didn't rule out the possibility of a popular protest, but they thought it would lead to outbreaks of violence, which would provide the pretext for the army to intervene and proclaim a state of emergency."

He explained that "there were two reasons why the development took a turn: the pacifism of the demonstrations, and the determination of a considerable part of the army not to save the regime, if it were to falter and if the demonstrations were to continue".

© Photo : Alhagie Jobe/ Twitter
Travel Disruption Reported in Algeria Over Protest Against Bouteflika's 5th Term
The Algerian political turmoil erupted in late February 2019 over Abdelaziz Bouteflika's decision to seek a fifth presidential term. The politician, who has suffered a series of strokes and has rarely been seen in public since 2013, has been at the helm for 20 years.

After three weeks of massive protests, on 11 March, the Algerian president conceded to public demands, announcing that he would not participate in the race, initially scheduled for 18 April 2019. However, at the same time Bouteflika postponed the presidential election, saying that it would be preceded by a nation-wide referendum on political and constitutional reforms.

The government did not set a new date for the presidential vote. The announcement was followed by a series of replacements in the Algerian government with Noureddine Bedoui  assuming the position of the country's new prime minister and Ramtane Lamamra being appointed as Algeria's new deputy prime minister.

Hundreds of Lawyers Protest in Algeria Against Bouteflika's Candidacy - Reports