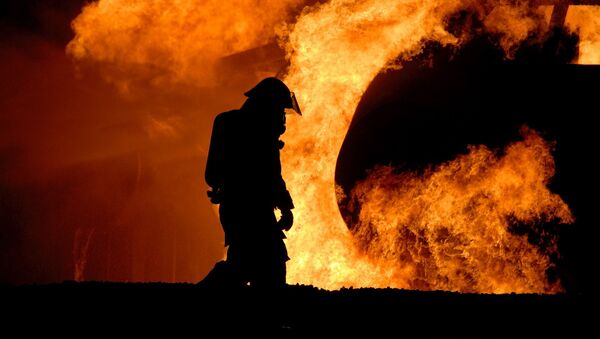 Flash-frozen last February by the Beast from the East cold wave, the UK is now defrosting in the oven of an anomalous heatwave, with numerous wildfires ravaging the countryside.

A heatwave originating from Morocco has brought record-breaking temperatures to the UK. Even though it's still February, the temperature in London Tuesday hit 21.2 degrees Celsius (approximately 70 degrees Fahrenheit).

While many people on the Misty Island enjoyed the unusually warm weather by going out to parks, the heatwave turned out to be a catastrophe for the wilderness, as massive wildfires spread across the country.

Firefighters spent Tuesday battling blazes in East Sussex, Edinburgh, Saddleworth Moor, Greater Manchester and North Wales, the Daily Mail reported. Two separate wildfires have been reported in Ashdown Forest, famous for being an inspiration for A. A. Milne's Hundred Acre Wood, the home of his character Winnie the Pooh.

​Awesome — in the original sense of the word — pictures of massive walls of flame turning the night sky red at Saddleworth Moor spread across the internet. Initial reports from the site said the fire covered about one-and-a-half football pitches. Five fire engines were reportedly dispatched to tackle the disaster.

The heatwave is expected to end on Thursday, when heavy rains are forecast to fall over the country and continue until the end of the weekend, the Daily Mail reports.

Huge blaze on Saddleworth Moor in the Peak District.
Wildfire on Dartmoor visible from NASA satellites.
I live about 3 miles from Arthur’s Seat in Edinburgh and can smell smoke.
It's February. This is doubleplus ungood. pic.twitter.com/YziYldKdB1

​The extraordinary temperatures come in the wake of an equally extraordinary frost in February 2018, which plunged temperatures below freezing and brought heavy snowfall across the country, earning the nickname "Beast from the East."

January Australia’s ‘Hottest Month on Record’, Heatwave Persists (PHOTO, VIDEOS)
Bob Ward, policy and communications director at the Grantham Research Institute on Climate Change and the Environment at the London School of Economics and Political Science, commented that the weather anomalies are the result of an ongoing climate change process that is likely to bring even more such phenomena.

"While warmer winters might seem pleasant for many people, it is worth remembering that this is the result of a climate change trend that is also making heatwaves and heavy rainfall more frequent, as well as coastal flooding due to sea level rise," he said.

Paged at 1131 to a wildfire near Rothiemurchus Lodge which was well alight on arrival. A brilliant team effort from all the @fire_scot crews attending a very demanding incident in a forested area with horrendous conditions underfoot. Returned to station at 1835hrs.#WeAreSFRS pic.twitter.com/UkJKU153Ze

​UK Met Office meteorologist Luke Miall, on the other hand, made a different assessment.

"This kind of event is what climate change would expect, but we can't directly relate it to climate change," he said in an interview.

The nature of the climate change we're currently living through remains a topic of debate, with some viewing it as a man-made catastrophe, while sceptics argue it is a natural, long-term climate oscillation.