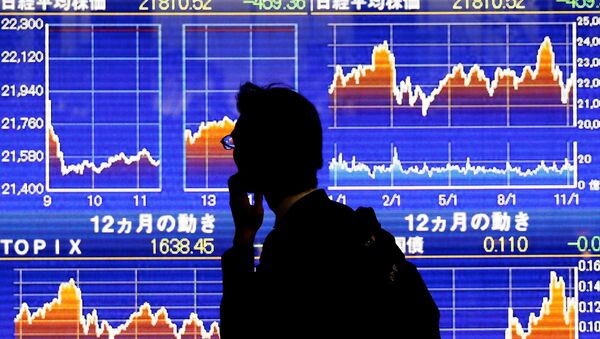 India and Pakistan announced on Wednesday that they'd shot down each other's aircraft; this exchange of hostilities came a day after the first aerial attack across the Line of Control between the two countries since 1971.

A fresh escalation of Indo-Pakistani tensions has taken its toll on global markets, with stocks dipping and investors seeking safer assets such as Japanese and Swiss currencies.

MORE:  WATCH Alleged Footage of Indian Jet Going Down After Being Hit by Pakistan

The Japanese yen and Swiss franc both gained against the US dollar in the wake of the crisis between the two nuclear-armed states.

It comes as the Pakistani military announced that it had shot down two Indian warplanes inside its airspace over the disputed Kashmir border. India's Foreign Ministry confirmed that it had lost one combat jet and that a Pakistani aircraft was also downed during the incident.

Pakistani Prime Minister Khan said in a televised address that these hostilities would benefit neither nation, and invited India to the negotiating table.

On Tuesday, India said it had conducted an airstrike on a militant camp inside Pakistan, which belonged to a terrorist group that claimed responsibility for a 14 February suicide bombing on a paramilitary convoy in the Indian part of Kashmir, which left over 40 men dead.

It was the first airstrike conducted across the Line of Control, which divides India and Pakistan in the disputed region of Kashmir, since the 1971 war.

Where Did It All Start?

The two countries have been at loggerheads ever since the British, when they left the region, divided its colonial landmass, called British India, into two nations along religious lines.

In 1947, India and Pakistan emerged as self-governing countries, with the Muslim-majority portion making up East Pakistan (now Bangladesh) and West Pakistan, and the rest being retained as India.

The bone of contention was the Muslim-majority state of Jammu and Kashmir, which was at the time led by a Hindu ruler who was expected to join Pakistan.

When he refused to do so, Pakistan-backed armed tribesmen invaded the state, and the Maharaja of Kashmir decided to accede to India, which sent its troops to defend the region. Pakistan's army officially entered the conflict in 1948 and gained one-third of Kashmir, with India retaining the rest of the state.

This confrontation was followed by another two wars in 1965 and in 1971. After the last armed conflict, Delhi and Islamabad reached a cease-fire and divided the early princely state with the so-called Line of Control, which now serves as a heavily militarised border.