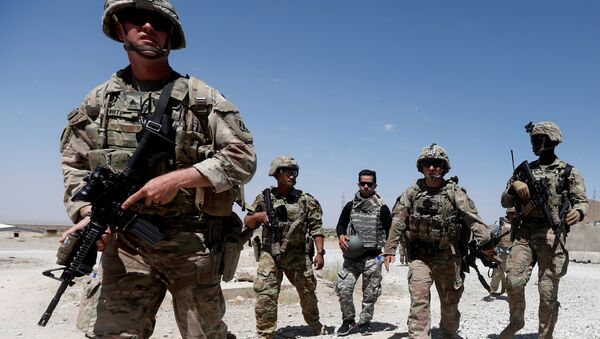 More civilians were killed in 2018 than in any of the previous nine years of the 18-year US war in Afghanistan, according to new data.

'Don't Invade': Pink Floyd's Waters Denounces Trump, Sanders Over Venezuela
A greater number of non-combatants in Afghanistan were killed in 2018 than during each of the previous nine years of the ongoing US war in the nation, according to a new United Nations report released Sunday.

While many have noted that recent peace talks between representatives of the Taliban and US officials could see a pullout by the Pentagon, others are worried that after America leaves the Middle Eastern nation there may be bloodbath and civil war.

The newly-released report, from the United Nations Assistance Mission in Afghanistan (UNAMA), suggested that increased numbers of suicide bombings, alongside concurrent aerial attacks on armed tribes outside of urban centers by US forces, were the cause of the rise.

The yearly UNAMA data claimed 10,993 civilians killed or wounded in 2018, representing the highest casualty figures since the UN branch initiated its documentation in 2009.

"Key factors contributing to the significant increase in civilian casualties were a spike in suicide attacks by AGEs [anti-government elements], mainly Daesh/ISKP [Islamic State Khorosan Province], as well as increased harm to civilians from aerial and search operations by pro-government forces," the UNAMA report noted.

"2018 witnessed the highest number of civilian casualties ever recorded [since the 2009 beginning of the ongoing study] from suicide attacks and aerial operations," noted the report.

As detailed by UNAMA, an estimated 63 percent of civilian casualties were the result of Islamic religious fundamentalists — Islamists — broken down into 37 percent by the Taliban, 20 percent at the hands of Daesh and another 6 percent by miscellaneous armed cabals.

'Afghan War is Defining Moment in History of Whole Region' – Scholar
Almost a quarter of civilian deaths were blamed on the US-supported Afghan government as well as its NATO allies.

In the past ten years, according to the UN secretary general special representative for Afghanistan, Tadamichi Yamamoto, over 32,000 civilians have died and another 60,000 have been injured in the longest war yet conducted by the United States.

"The report's rigorously researched findings show that the level of harm and suffering inflicted on civilians in Afghanistan is deeply disturbing and wholly unacceptable," commented Yamamoto, cited by Apnews.com.

"All parties need to take immediate and additional concrete steps to stop a further escalation in the number of civilians harmed and lives destroyed," he added.

Opium, Oil, Proxy Wars: Ex-Reagan Adm. Official on US' Long Afghanistan Saga
While US and Taliban representatives have engaged in tentative talks, the Washington-led central Afghanistan government in Kabul has been notably absent.

The administration of US President Donald Trump earlier declared the possibility of a withdrawal of US troops from Afghanistan. Diplomatic experts warned that a quick US withdrawal would lay the grounds for increased violence between multiple armed groups attempting to wrest control of the resource-rich nation.

"I am concerned that the withdrawal plans are being hurried up," noted former secretary general of NATO Jaap de Hoop Scheffer, adding, "if the US goes ahead with it, it will be a new tragedy for Afghans," cited by Deutsche Welle.

"But let me be clear that nobody is interested in a permanent military presence in Afghanistan, so it will happen someday," Scheffer remarked.