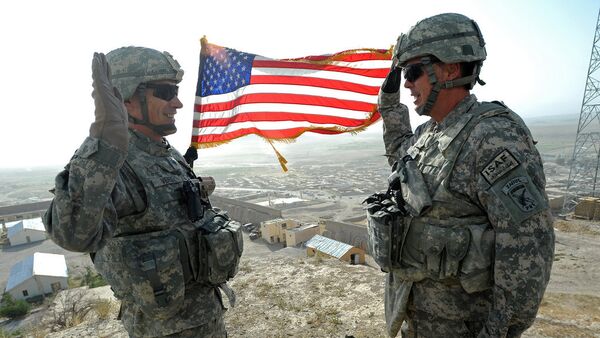 CC BY 2.0 / DVIDSHUB / Re-enlistment on top of Alexander's Castle
Subscribe
International
India
Africa
Ekaterina Blinova
All materialsWrite to the author
US policy-makers are continuing to oppose Donald Trump's decision to pull troops out of Afghanistan. Speaking to Sputnik, Dr. Paul Craig Roberts, economist, author and former US official, shared his views on the US' decades-long Afghanistan saga, surprising rise in opium crops under the American occupation and apparent use of Islamists by the US.

Donald Trump's decision to withdraw 1,000 or more US troops from Afghanistan has prompted concerns among American lawmakers and Washington's European allies. On 16 February the bipartisan group of US congressmen met with Afghan President Ashaf Ghani on the sidelines of the Munich Security Conference to discuss the painful dilemma.

The US' Afghanistan war, which will mark its 18th anniversary this October, started in 2001 following the 9/11 terror attack under then-US President George W. Bush.

"Officially, Washington invaded Afghanistan because the Afghan government was allegedly harbouring Osama bin Laden who allegedly organised the attack on the World Trade Centre and Pentagon", Dr. Paul Craig Roberts, economist, author, and former US assistant secretary of the Treasury for economic policy under President Ronald Reagan, told Sputnik, adding that "Bin Laden was the excuse for an invasion that served several interests."

Asia
30 Years After Soviet Afghan Pull-Out: CIA-Funded Mujahideen War Backfired on US
What was at stake was "the interest of the pipeline companies who wanted to control the flows of oil and gas", the former official highlighted, adding that yet another reason was the interest of "the Zionist neoconservatives" who controlled the George W. Bush administration.

"The neoconservatives had a published plan to invade 7 countries in 5 years", Dr Roberts said in a reference to a disclosure made by retired US Army General Wesley Clark, a former Supreme Allied Commander Europe of NATO, during his 2007 speech at the Commonwealth Club of California.

Clark recalled that following 9/11 a Pentagon official told him that he had a memo saying that the US were "going to take out 7 countries in 5 years, starting with Iraq, and then Syria, Lebanon, Libya, Somalia, Sudan, and Iran."

According to Roberts, "Afghanistan became the link to the invasion of Iraq".

"If the neoconservatives could have claimed that Iraq was harbouring bin Laden, the invasion of Afghanistan probably would not have occurred", he suggested.

Inspector General: US Needs Programs to Counter Opium Trade That 'Actually Work'
The US Afghanistan operation has become the longest and most expensive of Washington's overseas wars. Delivering the State of the Union speech on 5 February, Trump made it clear that "great powers don't fight endless wars".

Dr. Roberts suggested that the CIA could have had a hand in it and "doesn't want to give up the money which finances its covert operations" such as organizing and supplying Islamists. 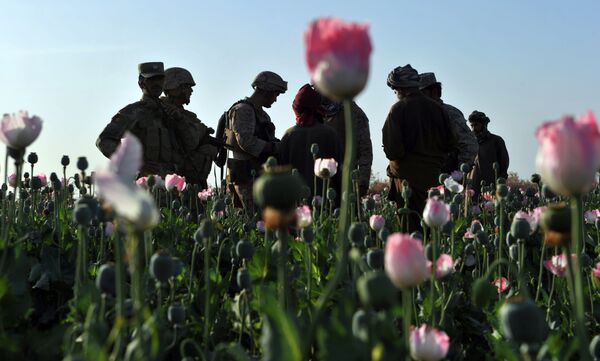 The Carter Adm. Waged a Proxy War Against USSR in Afghanistan

However, the US' Afghan saga started much earlier than 2001: In the late 1970s and 1980s the US administrations waged a proxy war against the Soviets in Afghanistan that was kicked off by then President Jimmy Carter "by organising the Mujahideen under Osama bin Laden", the former US official recalled.

Gromov on Afghanistan: US Did Everything to Halt Soviet Pullout or Ensure Losses
Washington provided Afghan guerrillas with weapons starting with assault rifles and ending with deadly Stingers as well as reconnaissance data in a bid to expel the Soviets from the Central Asian country.

According to Dr Roberts, the purpose was to weaken the Soviet government "by giving it a taste of what the US suffered in Vietnam".

"The belief was that the Soviet army would be demoralized and the Soviet people would experience the failure of the Soviet government, thus undermining confidence in communist rule", he said. "The Reagan administration inherited the war and, as the plan was succeeding, continued the support of the Mujahideen".

However, the economist underscored that "the Soviet Union was not defeated in the Cold War".

"Gorbachev and Reagan agreed to end the Cold War and its risk of nuclear war", Dr Roberts said. "President Reagan stressed that his goal was to end the war, not to win it… Reagan was sincere and perhaps also his immediate successor, George H.W. Bush, but beginning with Clinton Washington initiated 3 decades of hostilities toward Russia". 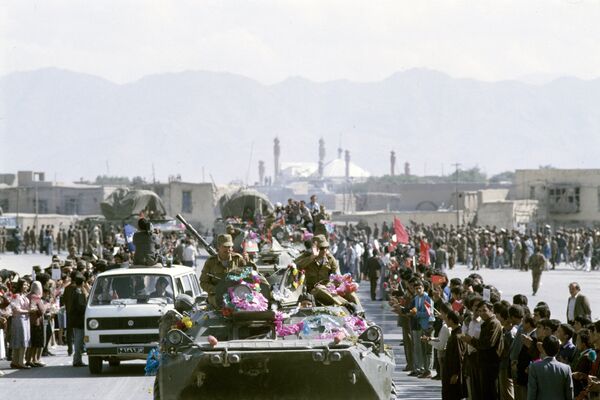 In early January 2019 Trump said: "The reason Russia was in Afghanistan was because terrorists were going into Russia. They were right to be there."

Commenting on the US president's stance the former Reagan administration official noted that Trump is using his interpretation of the Soviet intervention "as an excuse for US invasions of other countries-to fight terrorism".

World
US Promised Taliban to Pullout Half of Troops From Afghanistan by End of April
"By claiming to be fighting terrorism, it takes the onus off of what is otherwise a war crime under the Nuremberg Standard", Dr Roberts remarked.

"Actually, the Soviet Union did not invade Afghanistan", the author emphasised. "That is the Western propaganda. The Afghan government invited the Soviet Union to send a limited contingent of Soviet troops".

On 15 February Russia commemorated the 30th anniversary of the nearly 10-year long Soviet-Afghan war. The military campaign was launched in response to repeated request from the Afghan authorities on 24 December 1979. In the course of the operation the Soviet limited military contingent ensured security of the country's vital economic facilities, routes and roads and thwarted the activity of Afghan Islamist insurgency.

Dr Roberts presumed that "apparently, the Afghan invitation was provoked by US disinformation".

"There is evidence that the Soviet Union was tricked and deceived by Washington in order to lure the Soviets into a conflict orchestrated by Washington. Zbigniew Brzezinski later said, 'We didn't push the Russians to intervene, but we knowingly increased the probability that they would'," Dr Roberts said referring to the interview given by Zbigniew Brzezinski, a former national security adviser to President Jimmy Carter, to Le Nouvel Observateur's Vincent Jauvert in 15 January 1998.

Dr Roberts opined that the US used its experience of weaponising Mujahideen force in Afghanistan later in other countries, most notably Libya and Syria.

According to the former official, ISIS [Daesh]* and various Islamist groups could have been organized and financed by the covert directorate of the CIA. He also suggested that "ISIS* originated in the forces organized in Libya by the CIA for the purpose of overthrowing [Muammar] Gaddafi".

Senate Approves Bill Opposing 'Precipitous' US Pullout From Afghanistan, Syria
Both the Syrian state-run media and Russian Ministry of Defence reported about worrisome incidents on the ground in Syria, including repeated evacuation of alleged Daesh* commanders by US Air Force choppers amid the Syrian government forces advance; and free and smooth movement of American Special Ops and the US-backed Syrian Democratic Forces (SDF) through Daesh* formations. However, these incidents remained completely neglected by the Western MSM.

In January 2019, the Russian Foreign Ministry reported that it had also obtained indirect evidence of US ties to Daesh* in Afghanistan.

Dr Roberts recalled that General Michael Flynn, former director of the Defence Intelligence Agency (DIA), told Al Jazeera in 2015 about Obama administration's "wilful decision" to turn a blind eye to the fact that the Syrian insurgency was driven by Salafists, al-Qaeda in Iraq (AQI)*, and the Muslim Brotherhood* in 2011-2012. These driving forces were well-described in a DIA 2012 intelligence report compiled for the Obama administration.

Speaking to Al Jazeera, Flynn also admitted the US-run Iraqi prison system provided grounds for the emergence of the Islamist militancy in the country following the US invasion of 2003: "What we did is we allowed things to happen in those prisons, in those detention facilities in Camp Cropper and Camp Bucca to where guys like al-Baghdadi spawned, and others as well".