India Must Engage With Taliban and the Afghan Government - Former President 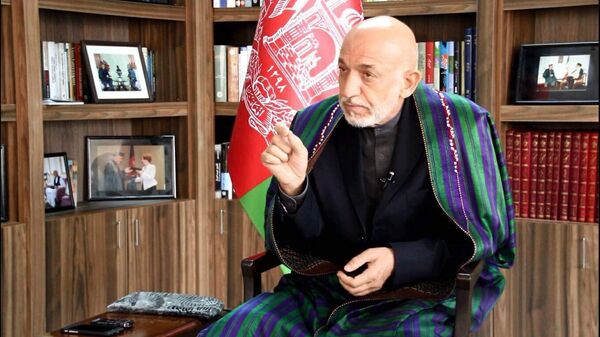 After the US’s announcement of a troop pullout from Afghanistan, hectic talks are underway among various stakeholders to chalk out a future strategy for security and stability in the war-torn country.

Against the backdrop of the US announcing a troop pullout from Afghanistan, former President of the war-torn country Hamid Karzai has urged India to step in and ensure that there is no exclusive deal between the US and Pakistan.

"Pakistan will not willingly give up the control or influence it has, but it is for the Afghan people not to allow a foreign country to influence us…Pakistan's actions against Afghan traditions and values still continue, and they must be stopped from wielding that power over the people", Former Afghan President Hamid Karzai said in an interview with The Hindu, an Indian daily.

"We want an Afghanistan that is friendly with Pakistan, but one that is sovereign of Pakistan's influence. In other words, we would help the US for peace in Afghanistan, but equally, make it clear that we want no deals on Afghanistan between the US and Pakistan and we hope that India will make that clear as well. Help us gain peace, and be sovereign", Karzai added.

The US remains intent on keeping bases in Afghanistan, but this is something that can only be granted to them through a legitimate forum which is the Loya Jirga.The American presence and bases should be a factor of stability & not for war, as we have seen https://t.co/qhwWB6ZjUw

Indian Army Chief Calls for ‘Unconditional’ India-Taliban Talks
Prodding India to take the lead in charting out a peace process for Afghanistan, Karzai who recently met with the Indian prime minister and foreign minister in New Delhi, appealed that India should reconsider its stance on not engaging directly with the Taliban.

"My proposal to India is that they must engage with the Taliban, as well as the government. Tomorrow if through a peace deal, the Taliban becomes a part of the government, then India will have to deal with them….We have been the victims of the deal concocted between the US and Pakistan during the Soviet invasion, which led to the creation and sustenance of extremist groups here. Pakistan's actions against Afghan traditions and values still continue, and they must be stopped from wielding that power over the people", Hamid Karzai said.

On being asked if he believed that the US will completely pull out troops from Afghanistan, Karzai said, "the US remains intent on keeping bases in Afghanistan, but this is something that can only be granted to them through a legitimate forum. That forum is the Loya Jirga (Grand Council of representatives), and it should be convinced that Americans want to stay on to keep peace in Afghanistan".

Meanwhile, during the historic India-Central Asia Dialogue over the weekend in Samarkand, the India made it clear that only an Afghan-led, Afghan-owned and Afghan-controlled peace and reconciliation process could create a lasting peace in Afghanistan.