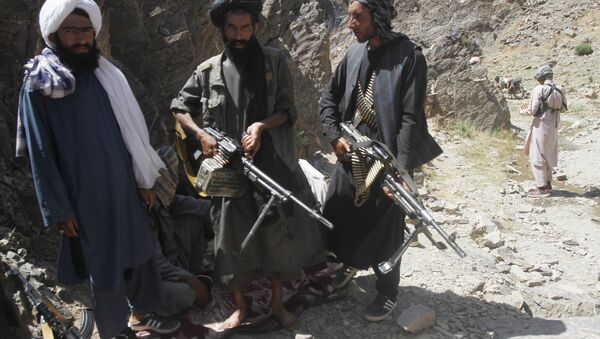 © AP Photo / Allauddin Khan
Subscribe
International
India
Africa
Indian Army Chief General Bipin Rawat opines that with many countries talking to the Taliban, India cannot be out of the bandwagon.

New Delhi (Sputnik) — Amid a rising number of countries participating in talks with Taliban, Indian Army Chief General Bipin Rawat has stated that it is time that India engages directly with the Taliban if India has interests in Afghanistan. General Rawat was addressing an annual press briefing in New Delhi on Thursday.

"If a number of counties are talking to the Taliban, then India cannot be out of the bandwagon. If India has interests in Afghanistan, then we should join the bandwagon," he said.

The army chief also said that talks with Taliban should be unconditional. "It is in our interest, in the region's interest and in Pakistan's interest," he added.

The army chief's statement contrasts with that of India's Ministry of External Affairs, which had reiterated on several occasions that New Delhi backs the official 'peace and reconciliation process' in Afghanistan, a process that involves talks with the Taliban to bring it into the Afghan political mainstream.

Asia
India, Afghanistan Discuss Regional Security Amid US Pullout
A highly placed government official told Sputnik that India will not be directly engaged with the Taliban and if there is any engagement it will be within the framework of Afghanistan's constitution and will be 'Afghan-led and Afghan-owned.'

Ever since India had participated in the 'Moscow Format' talks in November of last year by sending its retired ambassadors, TCA Raghavan and Amar Sinha, where the Taliban members were also present, it was speculated that India had diluted its stance on Afghanistan.

Refuting this perception, the Ministry of External Affairs clarified, saying that the 'Moscow format' meeting — which brought together Taliban representatives on the same table with delegates from several countries, including India, Pakistan, Iran and China — was at an 'unofficial level' and that India was not directly in talks with the Taliban.

Earlier this week, Iranian foreign minister Mohammad Javad Zarif offered to use his country's influence over the Taliban on behalf of India.

These developments assume significance as US Special Representative for Afghanistan Reconciliation Ambassador Zalmay Khalilzad is visiting India during his first visit to New Delhi after assuming office.