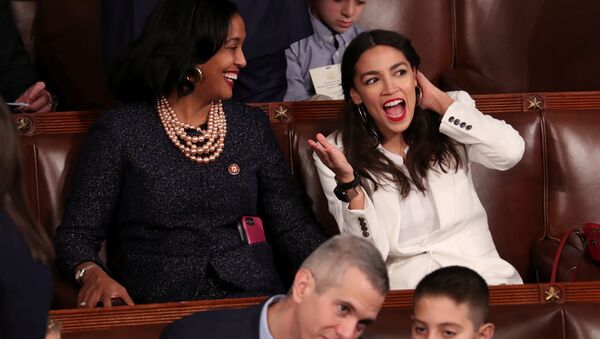 © REUTERS / Jonathan Ernst
Subscribe
Earlier, the then soon-to-be-sworn-in House representative from New York responded to Trump Jr's criticism by pointing out that she would as a congresswoman have subpoena power, which some people saw as a direct threat.

Democratic congresswoman Alexandria Ocasio-Cortez issued an apology to Donald Trump Jr, the son of the US president, over her own tweet posted on 7 December. In it, the newly elected, but at the time not sworn-in congresswoman rebuked Trump Jr's criticism of her and stated that it was not smart of him "to troll a member of a body that will have subpoena power in a month".

I have noticed that Junior here has a habit of posting nonsense about me whenever the Mueller investigation heats up.

Please, keep it coming Jr — it’s definitely a “very, very large brain” idea to troll a member of a body that will have subpoena power in a month.

The TV host of CBS' "60 Minutes" brought up the incident with Ocasio-Cortez and noted that some people had seen it as an abuse of power by the young congresswoman. She quickly retracted her statements, saying that it was "legal advice that any person would give" Trump Jr, but added that she apologized to him, in case he "felt genuinely threatened".

"If he felt genuinely threatened by me, I apologize." @AOC discusses her Twitter dispute with Donald Trump Jr. https://t.co/HUub7Y0xF6 pic.twitter.com/8ih11Wa0uI

Trump Jr has so far not commented on Ocasio-Cortez's apology. But twitterians have already reacted to her words. Many of them praised the Democratic congresswoman's response.

Some netizens were specifically satisfied by the fact that Ocasio-Cortez had actually made an apology, something that is rarely heard from politicians, which the TV host noted.

I give you a point for the apology.

Even Republican twitterians gave her a point.

Ms. Cortez is very impressive. A very intelligent young woman with creative ideas of positive change. She deserves all the respect in the world for her achievements and goals.. I’m all for positive change! That being said I’m a republican

Many netizens disagreed with Ocasio-Cortez and argued that she had violated the law with her actions.

Her threat was real and it is illegal. She should be charged. Democrats have done this for at least fifty years and then laugh it off with their buddies the MSM while they falsely accuse virtually all conservatives of crimes that never happened.

In the same interview, Ocasio-Cortez slammed Trump Jr's father, US President Donald Trump, claiming that there is "no question" that Trump is a racist, judging by the "words that he uses".  The young congresswoman noted that Trump is a "symptom of the problem", but not its root.

"The president certainly didn't invent racism, but he's certainly given a voice to it and expanded it and created a platform for those things", she said.

Following Ocasio-Cortez's statements, the White House rebuked her accusations by stating that Trump had condemned "racism and bigotry in all forms" on multiple occasions.