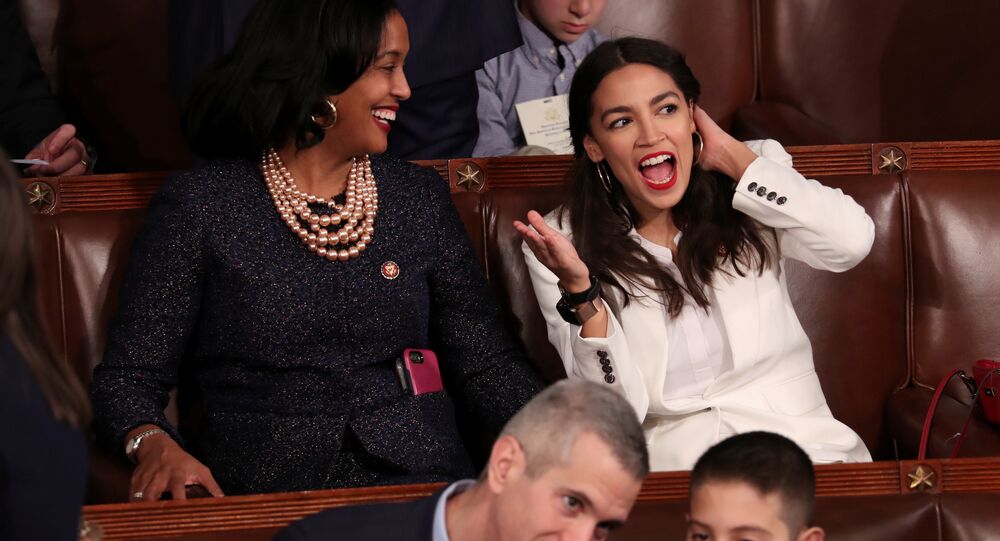 A scandal has erupted in the US after a video emerged on social media where Michigan Congresswoman Rashida Tlaib promised attendees of a meeting on 3 January to "impeach the mother**ker", referring to US President Donald Trump. Her choice of words was slammed by both GOP members and Trump himself.

New York Democratic Congresswoman Alexandria Ocasio-Cortez has come to defence of fellow Democrat from Michigan Rashida Tlaib over her profane words in regards to impeaching US President Donald Trump. Ocasio-Cortez accused members of the GOP, who criticised the slur, of hypocrisy, stating that they did not react that harshly after a tape of Trump's notorious "locker room talk" from 2005 surfaced amid the 2016 presidential campaign.

I got your back @RashidaTlaib — the Bronx and Detroit ride together 💪🏽💜

However, her support for Tlaib's profanity found little support among netizens, who pointed out that the case, which Ocasio-Cortez brought up, is not comparable to the "impeach the mother**ker" slur. Several social media users noted that Trump was not an official in 2005, whereas Rashida Tlaib was already a congresswoman when she gave her criticised speech on 3 January.

Um, ok, Trump NEVER "admitted" to sexual assault in that video. He was also a candidate when it was "discovered". He is now PRESIDENT OF THE United States OF AMERICA. YOU Ms. Ocasio-Cortez AND your "sister" need to show more RESPECT to the OFFICE! #ShamefulDemocrats

The difference being Trump said the stuff he did way before he was in office and this new Rep just got voted in and speaks in such a manner that is despicable and not becoming of any one whether Republican or Democrat. I didnt like Obamas agenda but never spoke about him likethat

Another user added that Trump's "locker room talk" was private, while Tlaib was speaking to a public when made her statement.

Except one was a private conversation and the other was said to a crowd…. pic.twitter.com/YuYTeh0Uqb

Others noted that Trump's controversial words, which some media commentators referred to as sexual assault, was not an excuse for Tlaib dropping the f-bomb in public while serving as a member of the US Congress.

One twitterian also reminded Ocasio-Cortez that not all GOP members were silent after the publication of Trump's "locker room talk".

False, Trump called it locker room talk, Republicans called for him to step down. Funny now how no democrats are calling for Talib to resign. Talk about hypocrisy. pic.twitter.com/Aepi3FJgH6

Many netizens decided to remain neutral and suggested that instead of fuelling the scandal, Ocasio-Cortez and Tlaib should focus on the job that they were elected to do.

You guys would get a lot farther focusing on issues affecting the population of this country vs acting like children because you don’t see eye to eye with the opposing party. #allpoliticiansarecrooked

Oh shuuuuuuuht up and do your job like you were elected to do. 🙄

One social media user complained that modern US politics has begun to look more and more like a reality TV show and suggested that the two congresswomen should avoid contributing to that resemblance.

What’s sad is that both parties are behaving like this is a reality TV show. Trumps behaviour is inexcusable but show some class. Your country is supposed to be the leader of the free world and right now your elected officials look ridiculous.

There were also those who supported Ocasio-Cortez, praising her for pointing out the GOP's "hypocrisy".

Yes!!! This and thank you for keeping the hypocrisy of this administration in check.

president of United States once referred to US Asst AG Sally Yates as a c_nt just for doing her job. No apology, no GOP or media outrage.

The #hypocrisyexposed in the @GOP is astounding and appalling, again and again.

Recently sworn-in Michigan congresswoman Rashida Tlaib ignited a scandal after she promised her supporters during a meeting on 3 January 2019 to "go in there and […] impeach the motherf**ker", referring to US President Donald Trump.

Her choice of words was not only deemed inappropriate by some GOP members and Trump himself, who called it "disgraceful", but also by Democratic Speaker of the House Nancy Pelosi. She said that she "wouldn't use that language", but noted that "it's [not] anything worse than anything what the President has said".

The "locker room talk", to which Ocasio-Cortez was referred, was recorded in a video in 2005 and was published by The Washington Post in 2016 amid the presidential campaign. The footage featured a private talk between Donald Trump and TV host Billy Bush. The former told Bush how he had tried to seduce a married woman, claiming that he could kiss and "grab" a woman whenever he wants to.

The video resulted in public uproar, with some of commentators on media claiming that Trump had confessed to committing sexual assault. Trump, who was a presidential candidate at the time of the video's publication, denied the claims, stating that it was merely "locker room talk".

White House Counselor: Ocasio-Cortez ‘Doesn’t Seem to Know Much About Anything’