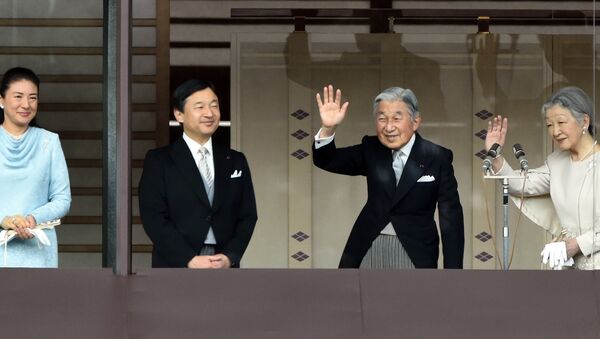 © AFP 2021 / TOSHIFUMI KITAMURA
Subscribe
Japan's Heisei period, which began in 1989, will come to an end in April when Emperor Akihito steps down from the Chrysanthemum Throne. Sputnik has spoken to independent researcher Sarah Hightower about how Heisei compared to the previous era, under Emperor Hirohito.

When Japan's Emperor Akihito delivered his final New Year's address on Wednesday, 2 January, more than 154,000 attended the event on the grounds of the Imperial Palace in Tokyo, many of whom were in tears.

Akihito, 85, is the first Japanese emperor in the modern era to abdicate and he will hand over to his son, Naruhito, in April.

It is the imperial tradition in Japan for the reign of each monarch to be given a name.

The name of Naruhito's era will not be announced until after he has become emperor.

Akihito's father Hirohito presided over Shōwa, a 72-year period which saw Japan go through phenomenal changes, including a bubble economy that grew by up to 15 percent a year during the 1960s.

So following the JP emperor’s abdication, the current period (called “Heisei”) is about to end.
It was announced that the new period will officially start on April 1st (the start of the JP fiscal year) and someone just tweeted that April Fool’s is gonna be lit lol

​Sarah Hightower, an independent researcher on Japan, said Heisei was supposed to be even better than the late Shōwa period, during which the nation became one of the most successful and advanced economies in the world.

"It was supposed to be an era of new beginnings. Heisei roughly translates to 'attaining peace' and that was the plan. The era after World War Two, the initial occupation, and the great economic miracle was supposed to be uneventful. It wasn't", Ms Hightower told Sputnik. 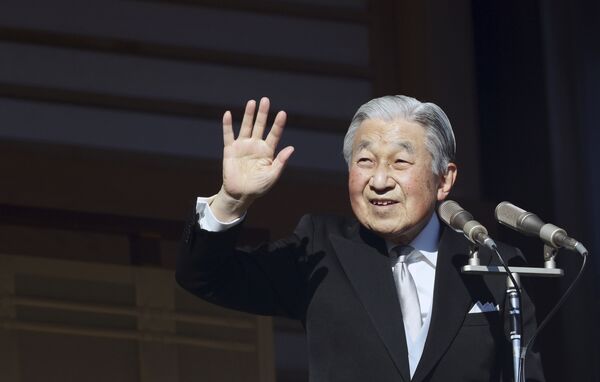 Emperor Akihito, 85, waves to the crowds in Tokyo as he makes his New Year's Day greeting for the last time
© AP Photo

Despite warmth towards Akihito — who is abdicating on health grounds — many people consider Heisei to be Japan's "lost years".

"There are actually quite a few young people who don't remember the end of the bubble era, the tumultuous beginning of Heisei, or even the Aum (Shinrikyo cult) affair. As a result there's been a revival of Heisei nostalgia. Part of it might be because the impending change has given society the chance to relive and discuss these things", Ms Hightower told Sputnik.

Hirohito was just 24 when he succeeded to the throne in 1926, a god-like figure who was worshipped during the militaristic 1930s and 1940s as the Japanese Empire conquered vast swathes of Asia.

The people of Japan heard Hirohito's voice for the first time in August 1945 when he spoke over the radio to announce the empire was surrendering after atomic bombs were dropped on Hiroshima and Nagasaki.

After the war, the United States decided to keep Hirohito on — claiming he was unaware of Japan's wartime atrocities — because they feared a communist takeover if the empire was abolished.

Hirohito remained emperor for another 44 years, during which time Japan's economy not only bounced back from the wartime defeat but went on an unprecedented growth spurt.

Akihito took over in 1989 and in the early 1990s the Japanese economy reached a plateau and began to stagnate, just as the Chinese economy took off.

Only a few months after Akihito came to the throne a serial killer, Tsutomu Miyazaki, was captured in Saitama prefecture, near Tokyo.

"At the beginning of Heisei the Tsutomu Miyazaki murders made otaku a social pariah. But by the end of the era we had things like the Cool Japan tourist initiative, which marketed anime culture to an international audience. There are quite a few examples like this", Ms Hightower told Sputnik.

In 1995, 12 people died when members of the Aum Shinrikyo cult set off sarin gas on the Tokyo subway.

"The Aum affair was the death rattle of the bubble era and ushered in the so-called ‘lost generation.' But it was also just a continuation of the uncertainty and societal decline brought to light by the Miyazaki incident at the start of Heisei. Tsutomu Miyazaki, Aum Shinrikyo, Boy A (a 14-year-old who decapitated a schoolgirl), Nevada-tan (an 11-year-old girl who killed a classmate), Tomohiro Kato (a mentally unbalanced man who ran down three people in a rented truck), and the other major incidents of Heisei were just symptoms of a society in economic and cultural distress", Ms Hightower told Sputnik.

Photos of Emperor Akihito's family for the New Year 2019. The last of the Heisei era.
Taken on December 3rd, the family are discussing their memories of visits across Japan.
📸: Sankei, Mainichi, Asahi pic.twitter.com/eeIVgE39BL

​"Aum Shinrikyo taught Japan that they weren't even safe from themselves. Or from the things that supposedly only existed for greater good like religion, charity, and social collectivism," Ms. Hightower told Sputnik.

"But even Aum Shinrikyo pales in comparison to the Tōhoku disaster (the 2011 earthquake and tsunami which damaged the Fukushima nuclear power station). Because unlike Japan's reaction to the Aum affair, the reaction to 3/11 highlighted a shared humanity and capacity for kindness that some may have lost sight of. Aum fractured Japanese society. Tohoku sort of brought it back together", Ms Hightower told Sputnik.

How else has Japan changed during Heisei?

"Japan is more nationalist than what may have been socially acceptable at the start of Heisei. Things like ‘netouyo' (an online far-right subculture you might compare to the alt-right in the West) and (Prime Minister Shinzō) Abe's LDP helped bring about these changes. But I don't think Japan will ever fully outgrow the shadow of World War Two", Ms Hightower told Sputnik. 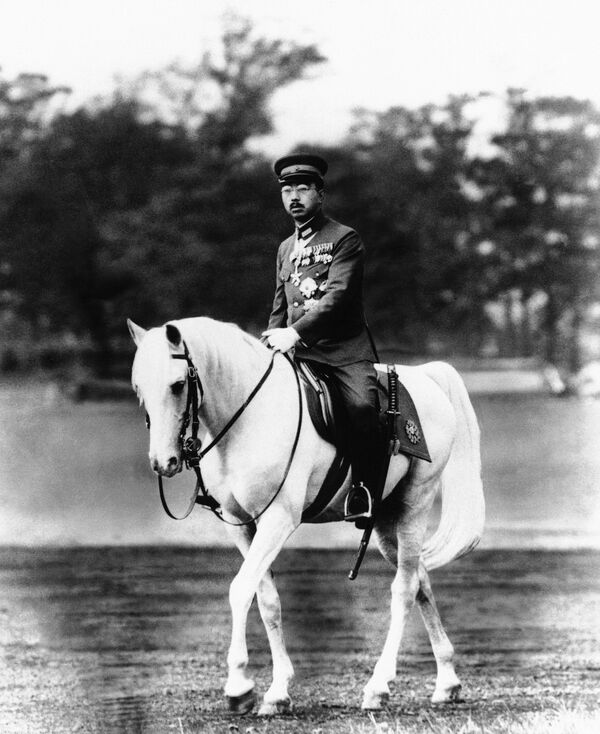 In this undated file photo, Japan's Emperor Hirohito rides a horse at the imperial palace in 1940. A newly released memo by a wartime Japanese official provides what a historian says is the first look at what was on the minds of Emperor Hirohito and Prime Minister Hideki Tojo on the eve of the fateful 1941 attach on Pearl Harbor that thrust the U.S. into World War II.
© AP Photo / AP file photo

What about the Japanese in 2019? In 1945 the Japanese people, who had been told their emperors were demi-gods, were "deprogrammed" and forced to accept Hirohito and his family were mere mortals.

The announcement of the new era will be 85 days later.🎊
The Heisei will end 115 days later.🇯🇵
The rugby world cup will be held 257 days later.🏈🌏🏆
Paying tax will raise 268 days later.💸💸💸
Tokyo Olympic will start 565 days later.🌏🎖🎖 pic.twitter.com/egLhfddINV

"Basically, there's no divinity but there's a love and a longing for tradition, stability, and the like. So while there may not be an intense reverence comparable to his father there's still a deep respect for Emperor Akihito and the rest of the Imperial family. It's like the people in the UK who keep up with the British Royal family but way more polite", Ms Hightower told Sputnik.

When Emperor Naruhito takes over the Chrysanthemum Throne in April he will be 59 years old and his heir will not be one of his own children.

That is because his only child is his daughter Aiko, officially known as Princess Toshi, who is 17.

So, a month ahead of the abdication, theoretically avoiding the Y2K-like problems of entering a new era without knowing the name of the era. My favourite tidbit was that some Showa-era systems are still numbered like it’s Showa, skipping Heisei entirely. https://t.co/P9dHXXSvpk

​Japan does not allow women to inherit the throne, so Naruhito's heir will be his nephew, Prince Hisahito, who is now 12.

Ms Hightower said it was unclear whether Japan would change its law of inheritance to allow an empress.

"Japan is still an incredibly patriarchal society. I can't say what's to come in the future and it's not my place to guess. But if there's one thing Heisei taught us it's that anything can happen. When it comes to Japan you should always do your best to expect the unexpected", Ms Hightower told Sputnik.

000000
Popular comments
Monarchies are obsolete in the modern world.