Olympic Champ From Russia Shows Who Rules on Ice (VIDEO) 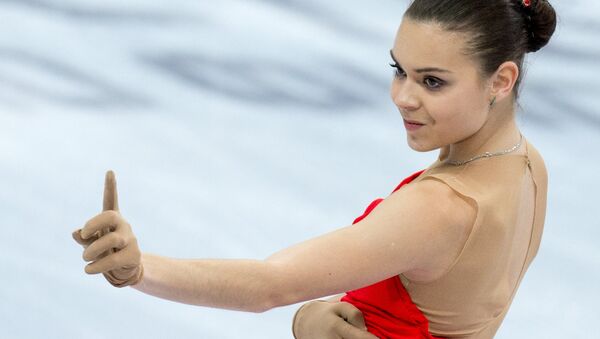 Adelina Sotnikova, who became the first Russian to win an Olympic gold medal in a women’s figure skating singles’ competition, retired shortly after her 2014 victory in Sochi. In a recent Instagram entry, she challenged other ice skaters, claiming none have been able to copy her signature element.

Russian Olympic champion figure skater Adelina Sotnikova, who has been taking part in various ice shows since she quit competing in figure skating, demonstrated a unique spiral in a boastful Instagram video. She claimed no figure skater has been able to perform this element in the way she did it.

The clip features her show partner Nodar Maisuradze with his clumsy attempt to repeat the trick and skate on one leg, holding the free one extended behind his body.

“Expectation-Reality. @adelina_sotnikova14 — @snodar. When you try to copy my signature spiral. In fact, I haven’t seen any other skater perform this spiral in the way I did. Not humble, but it’s a fact! Even those who do it can’t make it look exactly like mine. The same thing is with Adelina’s spins. P.S. I’ve left a mark in history, all around,” Adelina’s caption reads.

Sotnikova is a five-time Grand Prix series medalist and a four-time national champion, who became the first-ever Russian figure skater to take home the gold medal in the ladies' singles event.

Ever since the Sochi darling suffered a leg injury during a practice session in November 2014, her career has gone downhill, with the high moments coming at popular ice-skating TV-shows rather than World Cups, but Sotnikova says she's returned to serious training.