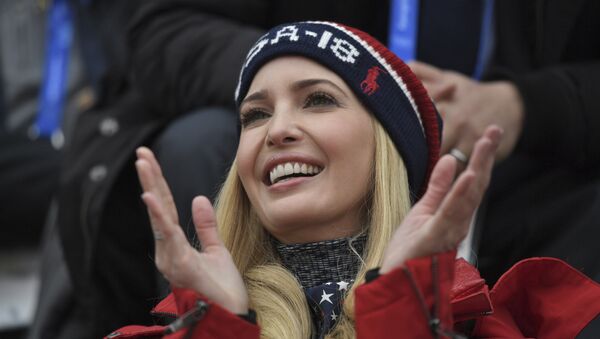 The US President invited Counselor to the President Kellyanne Conway and Press Secretary Sarah Huckabee Sanders to take the podium during a rally at the Allen County War Memorial Coliseum in Fort Wayne, Indiana. The president introduced them as “very shy” women, saying that the crowd had “never heard of them.”

Sarah Sanders acted surprised at first. She began with an apology, saying that she and Conway might be speechless, as they are not used to friendly crowds in the course of their work.

“The greatest job that I’ll ever have, the greatest title I’ll ever have, is that of a mom. That’s why I work for this President… I want somebody that I know will protect their future, protect this country, and make sure they have the best America possible.”—@PressSec in IN pic.twitter.com/8yurmGu89o

​After the introduction, she got straight to business, endorsing Donald Trump.

“The greatest job that I’ll ever have, the greatest title I’ll ever have, is that of a mom. That’s why I work for this President, because I care about my kids’ future and I care about the future of this country… I want somebody that I know will protect their future, protect this country, and make sure they have the best America possible,” she said.

The rally crowd met her confession with cheering. Many praised the press secretary on social media as well, telling her to stay strong.

Stay strong, @PressSec! We see you and we appreciate you!

​However, not all netizens were friendly and compassionate towards Sanders; some said she deserved the tense treatment she received during her press briefings.

Maybe if Sanders told the truth and didn't treat the press with disdain the crowds would be friendlier towards her.

​Advisor to the US President Ivanka Trump, the commander-in-chief's daughter, also got her time to shine at a Make America Great Again rally in Cleveland, Ohio. In her speech, she gave credit to the incumbent US President, her father, for giving everybody a voice and improving the US economy.

“This President, this Administration is fighting so that all Americans can achieve the American Dream.” —@IvankaTrump

Despite meeting with applauses in Ohio, her endorsement wasn’t well-received online.

By “all Americans” she means her family members. And by “the American Dream” she means corruption.

Election Day will show if we just have a terrible President or if America a terrible country.

​Some pointed out that campaigning is forbidden for Administration employees, claiming neither Ivanka Trump nor Sarah Sanders was allowed to speak during these rallies.

Despite a federal law prohibiting employees from campaigning, Trump brought White House employees Ivanka Trump, Kellyanne Conway, and Sarah Sanders on stage to praise him and stump for Republicans.

"I saw them standing there and I said, 'get them up here,'" Trump says. pic.twitter.com/ZDRElqkvyb