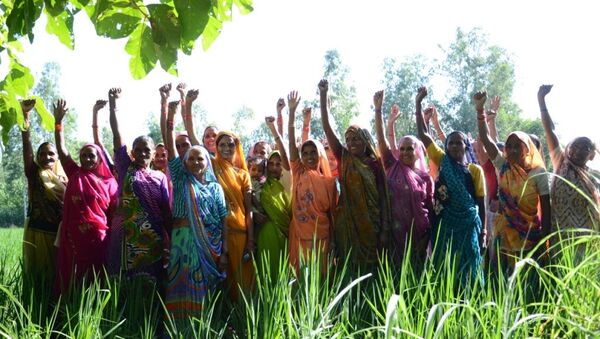 © Photo : Oxfam India
Subscribe
In India, NGOs have been working to raise awareness about gender disparity in agriculture and to empower women farmers through mass-scale community mobilization drives. As a result, many success stories are emerging that speak volumes about the fortitude of women in asserting their rights against all odds.

Sputnik (New Delhi) — In India's eastern state of Bihar, women farmers have employed an innovative initiative of running and managing paddy sapling banks. They use an accurate scientific technique to cultivate rice saplings, just in time, and ready for transplantation. Village Square, a public-interest communications initiative focusing on rural India, reports that these women are earning a respectable livelihood by selling the saplings to small and marginal farmers.

This story emerged from the Muzaffarpur district, which was earlier in news due to a horrendous case of sexual abuse of women in a shelter for the homeless. Given that the rural landscape of India has earned notoriety for oppression and marginalization of women, such a success story is a source of inspiration for many. 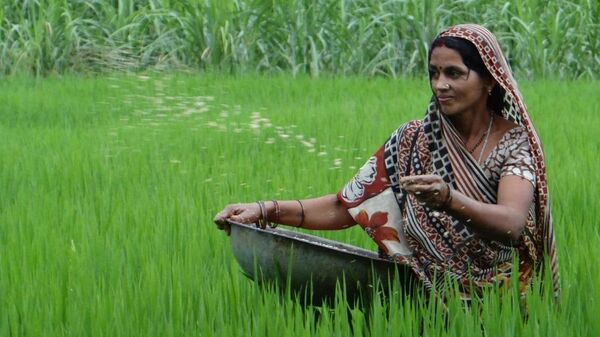 Women Farmers of India Striving To Overcome an Era of Marginalization
© Photo : Oxfam India
As per the 2011 census of India, women make up more than 60% of India's agricultural workforce. Yet their contribution to farming activities is largely unaccounted for.

Indian Government Seeks Apex Court Directions to Ban Female Genital Mutilation
In 2011, the Food and Agricultural Organization of the United Nations reported that the output of women farmers can be increased by 20-30% if they are provided with equal access to resources such as land, technology and financial services. This is especially relevant in the context of a developing economy like India.

A women farmers' collective in the North Dinajpur district of West Bengal is charting their route to empowerment through organic farming. They are reviving indigenous methods and also integrating practices such as duck rearing that are synergistic to rice cultivation. As per the report published by Village Square, these women were once ridiculed by their male counterparts, who chose to continue with chemical-intensive farming.

The latest Economic Survey of India, by the Ministry of Finance, has acknowledged that "For sustainable development of the agriculture and rural economy, the contribution of women to agriculture and food production cannot be ignored… The differential access of women to resources like land, credit, water, seeds, and markets needs to be addressed."

Ordinary Women Rise Against Patriarchal Practices in India and Make a Difference
There is a global realization that improving the status of women farmers is beneficial to everyone. The biggest deterrent in achieving this goal is the ender disparity in ownership of landholdings in agriculture. This issue was undertaken by Oxfam India in 2006. The renowned international confederation joined hands with Gorakhpur Environmental Action Group and four other grassroots organizations to start the AAROH campaign that aimed at securing land rights for women farmers in the most populous state of India, Uttar Pradesh.

"Around 2005-06, the regional manager at that time found that many women had been refused credit by banks because they didn't own their agricultural lands.  They were deprived of access to government schemes meant for farmers because they were not recognized as women 'farmers'. At the start of the campaign, a study was conducted to find the baseline status in Uttar Pradesh. One figure that comes to my mind now is that about 4% of landholdings were in the names of women at that time," Nand Kishor Singh, regional manager Oxfam India, recalls the state of affairs at the onset of the AAROH campaign.

A mass-scale community mobilization drive was started to sensitize men about the benefits of transferring landholdings to women. Hardly any women appeared during the first few meetings as they were discouraged by the men in their families. Later, women were made to realize the importance of asserting their rights.

"There has been a complete feminization of the agriculture across the country. With men migrating to cities, in search of jobs, women are left to take care of the household as well as agriculture. I asked some women that suppose your husband is an alcoholic or he leaves the village, then what will happen to you and your children if you don't have ownership of the land that you depend on. This logic got their attention and soon enough they influenced other women as well to participate in our outreach meetings," Singh told Sputnik.

Indian Men Take to the Streets Shirtless to Protest Rape (PHOTOS)
In 2007, a march was held where 43,000 women participated, many came astride bullock carts, and 15,000 men followed in their support. The AAROH campaign was concluded in 2017. During its 11 year tenure, several campaigns were undertaken to influence all stakeholders. Thousands of postcards were sent to the state governor and massive rallies were organized.

"The biggest achievement that happened is that the identity of women farmers was established and recognized by the government. Women started getting invitations to training programs and farmers' fairs organized by the agriculture departments and institutes. As per the study conducted at the closure of the campaign we observed that landholdings in the name of women farmers had increased to 18 percent in UP. This is still a very low figure and there needs to be a provision where the name of wife is added with the name of husband in existing landholdings," Singh added.

India to Double Number of Women Volunteers for UN Peace Missions
During the course of the campaign, Singh witnessed many heartening transformations on the field. Manna Devi stood up against land mafia, corrupt officials, as well as her own husband, who had colluded for an illegal land deal. She ensured that he wouldn't escape prison for his cheating. Today, she is an expert on the finer points of paperwork involved in land dealings and also provides consultation to other women in her village. 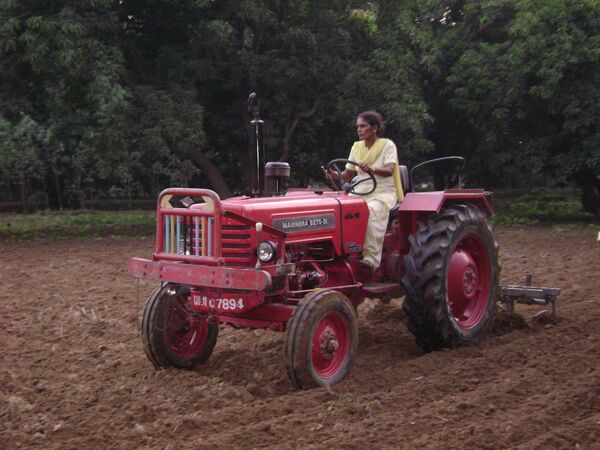 Women driving a tractor in India
© Photo : Oxfam India
Suresho Saini, from Saharanpur, resolved not to be dependent on her apathetic husband and became one of the first few women to plow her own land with a tractor. She remained resilient in the face of constant opposition from her matrimonial family and others in the village. Today she is hailed as a courageous and hardworking woman.

"I've left behind the Suresho who used to cry and blame her destiny. I support not just my own family but I also help my other sisters in the community in farming and taking care of their livestock. I believe that when women will have money they'll be empowered. When women develop the desire to get what is rightfully theirs then they will come forward. Only a woman can feed everyone because she has compassion in her heart. Today it's needed that women do farming with full strength and conviction and assert their right," Suresho Saini says.

The views and opinion expressed by Speakers in this article are those of the speakers and do not necessarily reflect the position of Sputnik.