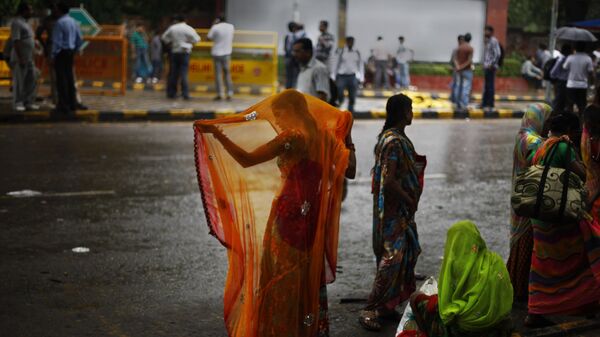 © AP Photo / Altaf Qadri
Subscribe
International
India
Africa
The 21st century's resurgent India is still struggling to ensure the freedom of its women from the patriarchal bias that continues to manifest itself in the form of virginity tests, female genital mutilation, the denial of basic health and hygiene. On the eve of International Women’s Day, Sputnik spoke to some of the survivors.

New Delhi (Sputnik) — She woke up the first morning after her marriage only to be abandoned by her husband and to be chastised and punished by her community’s self-styled court of elders. Sangeeta (name changed to protect her identity) had failed the virginity test the previous night by failing to stain the white cloth given to her by the community elders with her blood.

Sangeeta was an aspirant for police services and that morning she was struggling to unsuccessfully explain to the elders of her Kanjarbhat community, an erstwhile nomadic tribe hailing from Rajasthan and now settled in different parts of India, that her hymen might have torn during physical exercise. Her husband abandoned her at the orders of the community but Sangeeta refused to give up and approached the Maharashtra police.

When the incident attracted huge public attention, the community leaders relented and her banishment was revoked. But life was no better for Sangeeta who has a family but is forced to live inside the four walls of her house, with no connection to the outside world. She requested Sputnik not to disclose her place of residence.

Such incidents are commonplace in 21st century India where women face multiple forms of patriarchal bias and atrocities and where laws are of little or no help. Practices like female genital mutilation (FGM), mandatory virginity tests for brides and violence against women including rape of girls as young six months old continue unabated in present day India. Although governments spout promises of swift and stringent action, there are no actual results on the ground.

Now, some grassroots level leaders have begun taking charge of the situation, encouraging victims to raise their voices in order to fight the patriarchal bias that is the root cause of crimes against women.

While Sangeeta's story made headlines last year, Vivek Tamaichekar, a student at the Tata Institute of Social Sciences (TISS), Mumbai belonging to the same Kanjarbhat community decided to mobilize some youths from his community to stop the mandatory virginity test for brides.

“We were around a dozen boys who came out first and said that if men say no then their brides will not be mistreated by inhumane and obscene practices like the compulsory virginity test.  Now we around five dozen youths including women who are organized as ‘Stop the V Ritual’ movement and we are working hard to sensitize community members against such inhumane practices,” Vivek told Sputnik sitting alongside his cousin Priyanka and other volunteers of the movement, busy working on their laptops which is their primary mode of reaching out to supporters and replying to their detractors.

“We (the Kanjarbhat community) are around 20 to 40 thousand in total across India and are mainly based in the states of Maharashtra, Gujarat, and Rajasthan. The irony is that virginity test of brides is practiced by the educated and uneducated alike in both urban and rural areas and the girls remained mute to this atrocity till some years ago. It is not just about the virginity test, the community also strives to do things like purification of women for their alleged immorality, etc. In 2014, a single mother in a Nasik village was asked to prove her chastity by walking semi-nude while her 12-year son had to hold a fireball in his hand. She opposed this and went to the police. Today, women like her are our strength, Priyanka Tamaichekar, Vivek’s cousin told Sputnik.

The community has a constitution of its own which called the "kali kitaaib" or the black book by the community elders which sets forth the morality benchmarks and punishments for the women of the community, adds Priyanka. 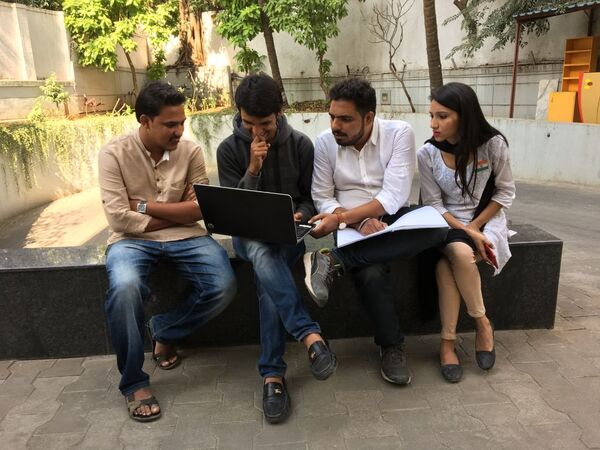 The book was drafted in the year 2000 and the signatories include educated people in the public eye, including a well-known attorney Murchand Bhat. Sputnik tried several times to reach out to Bhat for a reaction to the practice but he declined to comment saying he did not feel comfortable to talk about the matter.

The issue was raised in the Legislative Council of Maharashtra during this year’s budget session in February to which the state’s junior minister for Internal Security Jayant Patil said, “strict action will be taken against any such incident (virginity test) reported to the police.”

Not far away from Pune, Mumbai, the commercial capital of India, is notorious for yet another patriarchal practice of female genital mutilation (FGM) of teenage girls. The practice prevalent among the Bohra Muslim community in India was denied as "not being practiced with no official data on it" by the government of India in an affidavit submitted before the apex court. The stand of the government forced FGM survivors like Masooma Ranalvi to come into the open and mobilize public opinion against the inhumane custom.

“Speaking about it is a taboo in the community and the trauma of a young girl carried by the mother or elder women of the family to a midwife for mutilation of her genitals in a dark room is something which women like me do not want to happen to others. After the government affidavit, we decided to collect data on the custom and our study found that 75% of the daughters in the community study sample were subjected to FGM which clearly means it continues to be practiced in India. Around 97% of women who remembered their FGM experience from childhood recalled it as painful. While most women said they suffered immediate pain from the procedure only two women said they did not have any immediate or long-term impact from FGM. Around 33% of women subjected to FGM in the study believe it has negatively impacted their sexual life,” Masooma Ranalvi told Sputnik.

The movement of women against FGM led by Masooma, called "We Speak Out" started with an online campaign which has garnered signatures of around 100,000 supporters. The signatures were submitted to the head of the National Commission of Women of India and to other government officials including the Union Minister of Women and Child Development Menaka Gandhi. 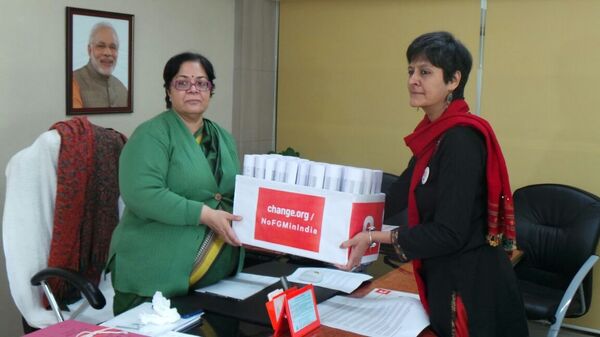 Masooma Ranalvi presenting the signatures of the No FGM in India campaign to Lalitha Kumaramangalam, Chairperson, Women Commission of India
© Sputnik / New Delhi

At "We Speak Out," we will strive to work for equal rights for Bohra women in all spheres of life. Specifically, on FGM, we all agree that the practice has no place in our lives and want it banned, Masooma adds.

Social experts agree that Indian society is a society of paradox and inequality and poverty has further reaffirmed the complexities in favor of the dominant male.

“Patriarchy is a social system in which men hold primary power, predominate in the roles of political leadership, moral authority, special privilege and control of the property etc. In India, the ancient Vedic texts present a very different image of society. It was a time when women were all powerful and controlled the resources and decisions. But with time India was subjected to a lot of external pressures and the pressure of re-organizing the society in these times made a lot of evils creep in. It is true that there are dichotomies within societies today and are typical of this country,” said Professor Badri Narayan from the Govind Ballabh Pant Social Science Institute, Allahabad to Sputnik.

Political leaders say that education and equal rights for women in society are the key to the persistant problems of bias against one gender.

“Women are getting ahead in all fields today and are also making India proud but the concern is about those women who are forced to suffer in silence and they are in the hundreds of thousands in different parts of the country. They need to be reached out to and there needs to be a proactive approach by the government to ensure quality education and health facilities to these people can make a huge difference to let them stand on their own and fight the menace,” D. Raja, Member of the Upper House of the Parliament of India told Sputnik.

Viral
Indian Woman Becomes an Icon for Helping Fellow Women Wield the Wheels of Change
According to UNICEF estimates its report on child sex ratio in India, the birth of female children is declining steadily. Figures showed that the sex ratio was 947 girls for 1,000 boys. States like Maharashtra, Gujarat, Punjab, Himachal Pradesh and Haryana have recorded more than a 50 point decline in the child sex ratio in recent times.

As per the National Crime Records Bureau (NCRB) released for 2016, a total of 3,38,954 cases were registered in India which fell under the category of "crime against women" and that was a three percent increase from the previous data for 2015. The NCRB data says 12 percent of the crimes against women were of rape and rest of them were mostly other forms of sexual assault and domestic violence.

Apart from the survivors of such crimes and community leaders standing up against the patriarchal practices, there are also women like Suparnaa Chadda in Delhi who have thought of organizing like-minded people to reach out to women in need of help.

“If we look at the Indian subcontinent’s ancient wisdom- women have been considered symbolic of ‘Shakti’ an energy that creates and hence is feminine. Women have been revered for manifesting and ensuring the propagation of humans and humanity. With time economic dependence has been misconstrued in India and has led to many malpractices including female feticide and exclusion of women in matters concerning money,” says Suparnaa Chadda who heads a movement called "Women Endangered Initiative" in India. 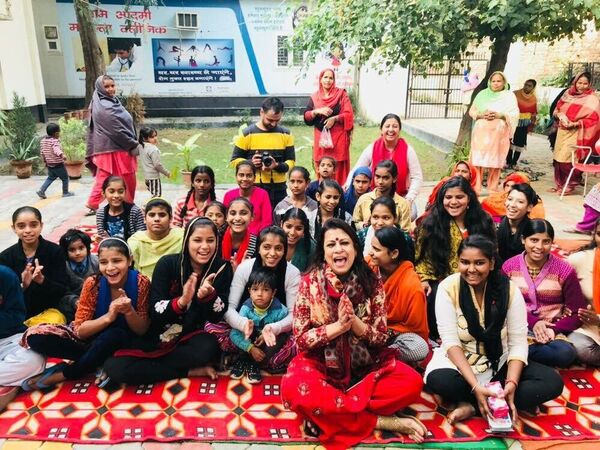 “In India, things are changing and women are becoming economically independent. From caregivers, they are also balancing and becoming providers. Education has a major role to play in this. While the change in women is rapid, the change in the mindset of accepting men as being ‘providers’ and also being ‘caregivers’ is yet to catch up. The way forward is by first being aware of this mindset of equity and inclusiveness. And then imbibing it within our own selves. After all the change begins with self,” Suparnaa Chadda adds.

The Woman Endangered Initiative has started campaigns like #LetstalkPeriod where they also crowdsource funds to gift menstrual cups to marginalized women and have partnered with manufacturers to provide the cups and cloth pads at lowered price to distribute to women who are unable to come out and speak for their needs.