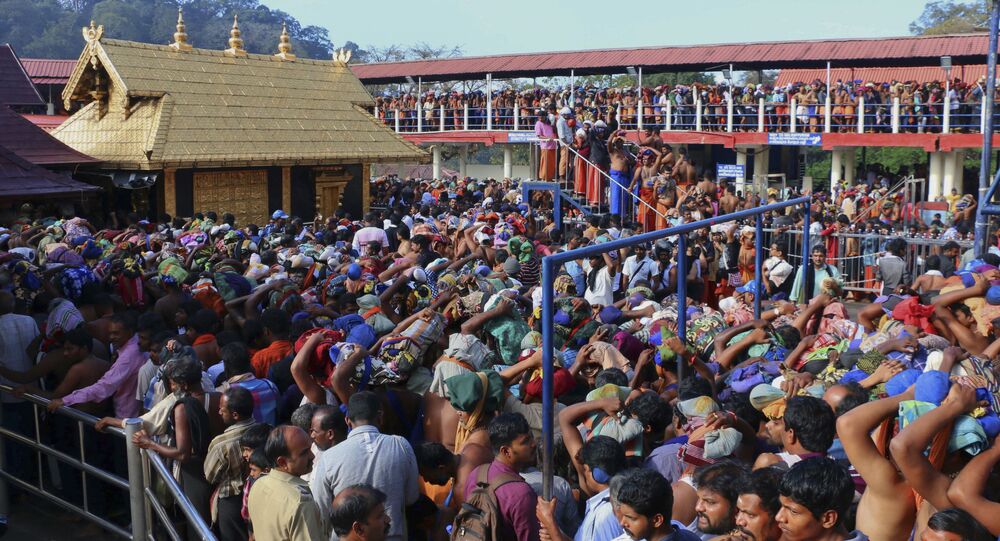 In India’s Sabarimala temple, women are not allowed to enter. Sputnik spoke to one of the petitioners challenging this age-old tradition. He says that pluralism and dynamism have been at the core of India's socio-spiritual churning as evident from the positive response they have received from various quarters.

New Delhi (Sputnik): India's Sabarimala temple, one of the largest pilgrim centers in the world, is in the midst of a controversy over a court case challenging the age-old tradition of adult females not being allowed to enter its premises. In one of the recent hearings, the country's apex court indicated that all customary and religious practices should conform to constitutional principles. Subsequently, the state government of Kerala where the temple is located clarified that it supports the entry of women into Sabarimala, triggering outrage from conservative Hindu outfits who have threatened to launch state-wide protests.

Sputnik spoke to one of the petitioners of the case, Rahul K Easwar, on what provoked them to take up the mission, and his thoughts of the changes happening in India on the socio-religious front and their impact. Ironically, Easwar is the grandson of the chief priest of Sabarimala temple.

Sputnik: Congratulations on the long drawn battle and the eventual near vindication of your stand on the Sabarimala women's entry issue. Please update us on the matter.

Rahul Easwar: Sabarimala is one of the largest pilgrim centers in the world, with over 40,000,000 — 50,000,000 devotees coming here every year. The ancient temple is thousands of years old and is dedicated to the Deity Swamy Ayyappa. The debate was that whether young women should be allowed to enter, as the deity is "Celibate." The matter has not been given a final verdict. But we are hoping for a faith-friendly and balanced verdict from the Supreme Court of India.

Sputnik: What were the biggest impediments in this battle against societal norms?

Sputnik: Who all helped in your endeavor and what do you think was the role of the media?

Rahul Easwar: The media has a huge role in social transformation. The media is helping to create awareness on the issue and whichever way the debate gets settled, it is the information and interpretation created by media that is helping the narrative.

Sputnik: Tell us something about yourself and your work. Did your family background pose an impediment in the mission?

Rahul Easwar: I am an alumnus of the Indian Institute of Management and London School of Economics. My work is mainly in the field of socio-spiritual awareness. I have written four books on Indian Philosophy. I don't think the family background has impeded my work.

Sputnik: India is known as a country of tolerance and accommodative faiths. Has the popular culture changed to some extent lately?

Rahul Easwar: More than 2000 years ago when Jews faced issues, we were one of the first lands they came to. The first organized Christian Church in the world came up in Kerala in India. The third oldest mosque after Holy Mecca and Medina is in Kodungaloor in India. This all has been happening and growing along with the deep-rooted more than five-thousand-year-old Hindu culture in India. The soul of India is pluralism. I concede that some glory of culture has depleted over past years due to news of lynching and mob injustice in India and that pains me a lot.

Sputnik: What lies ahead for you and the people who support you in such causes?

Rahul Easwar: Social activism is what we need in India and around the world. Our political systems may have good and bad elements but politics at the end of the day is "power" oriented. But social activists can make a good change in society. Like our Father of Nation, one of the great persons of last century, Mahatma Gandhi said: "be the Change, you want to see in the world."

Sputnik: Any message you wish to convey to our international readers?

Rahul Easwar: Humanity is in need of positivity. I used to ridicule the statement that "hate cannot defeat hatred" when I was in school. I thought of that as utopian and unrealistic. I have realized through 12 years of activism that 'only love and respect can defeat hate'. We have a great role for our own nations and for humanity at large. To convey the message of positivity for all human beings is important and youngsters must take up this responsibility. Protection of the environment and earth is vital for the growth of science.

The views and opinions expressed by Rahul Easwar in this article are those of the speaker and do not necessarily reflect the position of Sputnik.