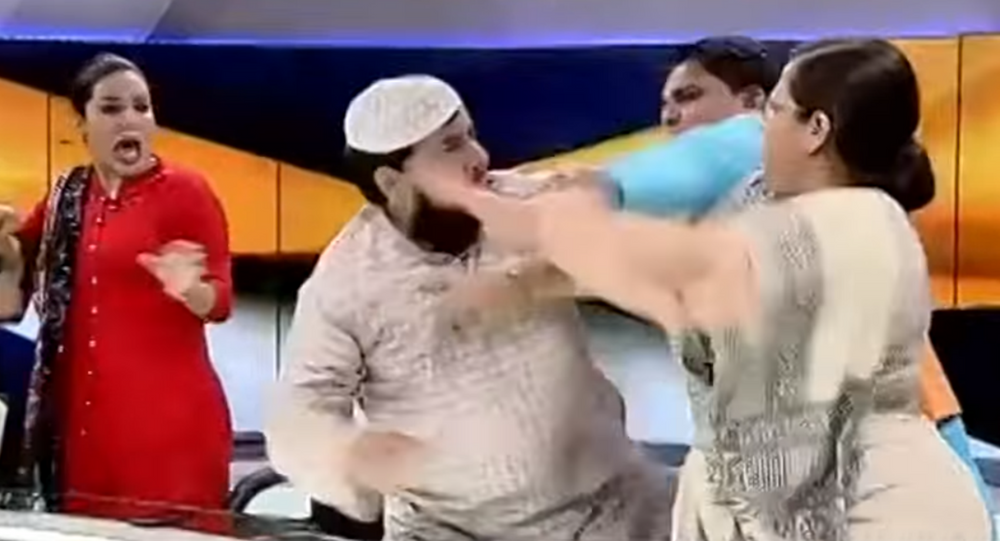 The altercation, which occurred during a live debate on Zee Hindustan, took place after Faiz told Qasmi that triple talaq is not recognized as a form of divorce in the Quran, Daily News and Analysis India reported. Within seconds, the two were on their feet, pointing fingers at one another and arguing the matter.

​Footage later posted to the TV station's YouTube account shows Faiz striking Qasmi before he responds by repeatedly slapping the woman. The three fellow panel guests quickly react and work to pull Qasmi away from Faiz as she fights back.

According to news outlet One India, Qasmi was later taken into custody by local law enforcement after Zee Hindustan's media office filed a complaint against him for assaulting Faiz. The Siasat Daily reported that the Muslim cleric has been remanded to a 14-day judicial custody.

The company has since condemned Qasmi's behavior toward Faiz on social media, saying that the incident was an insult to women. It also criticized the cleric for his remarks directed against activist Amber Zaidi, who was seen bursting into tears during a segment of the debate.

​India's Supreme Court banned the triple talaq practice in August 2017, deeming it an unconstitutional violation of Articles 14 and 21 of the Indian constitution, which relate to equality and the protection of life and personal liberty, Al Jazeera reported. However, judges ultimately left it up to parliament to come up with legislation addressing the issue.

Four months after the court's historic decision, government officials introduced a bill to the parliament in December stating that any Muslim man who divorced his wife by the practice would be jailed for up to three years for the offense. The bill is currently pending.