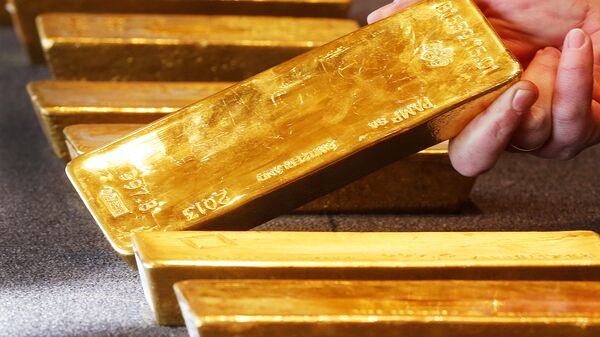 Foreign investors are getting rid of US bonds in 2018 while seeking safe havens amid the instability driven by the Trump administration's sanctions against Iran and Russia and a full-fledged trade war with China.

Washington is struggling to cope with the non-stop growth in national debt, which hit the $21 trillion mark in March 2018. To tackle the problem, the US Treasury increased its quarterly refunding by $30 billion and auctioned a record $26 billion of 10-year notes on August 8, after its package of 3-year bonds worth $34 billion had seen a somewhat modest demand from foreign investors.

The US' trade frictions with China have seemingly limited the foreign investors' appetite for American Treasuries and prompted them to seek safer havens amid the gathering storm.

Moreover, some countries have started dumping US debt since the beginning of 2018. For instance, Russian ownership of American bonds has declined 84 percent, decreasing from $96.1 billion in March to just $14.9 billion this May.

Russia Has 'Good Reason' to Bet on Gold Amid US Sanctions - Veteran Trader
For its part, Turkey has slashed its US Treasuries holdings by half: In May they amounted to $32.6 billion, while in 2017 they stood at the $62 billion mark.

Meanwhile, China's holdings of US bonds, bills and notes plummeted by $5.8 billion to $1.18 trillion in April; similarly, Japan, the second biggest foreign holder of American debt after China, decreased its holdings by $12.3 billion to $1.03 trillion, the lowest since 2011, according to Bloomberg. Mexico, India and Taiwan followed suit. As a result, in April foreign ownership of American Treasuries fell to $6.17 trillion.

Japanese investors continued to get rid of US bonds in May and June, selling a net of $18.76 billion and $4.09 billion, respectively, amid expectations of continuous hikes in US interest rates, Reuters reported on August 8.

In a sudden twist of fate, foreign buyers have boosted their Chinese bond holdings, despite a weakening yuan and narrowing gap between Chinese and US interest rates, The Wall Street Journal wrote on August 9.

"Solid demand from central banks was probably a major driver," the media outlet presumed. "These buyers hold yuan as part of their foreign-exchange reserves and can look past short-term currency moves."

US Economy May Go Bust if Dollar Loses Its Reserve Currency Status – Economist
On the other hand, national banks continue to increase purchases of gold to protect their assets amid global economic instability. Thus, Russia and China are boosting their reserves of the precious metal at a steady pace.

According to the Russian Central Bank, the country's gold reserves reached nearly 2,000 tons in June 2018, quadrupling since 2008 and amounting to 17 percent of Russia's total foreign reserves. The Chinese are following suit.

The countries' strong appetite for the yellow metal is driven not only by the Trump administration's sanctions and ongoing tariff spree, but also the seemingly crumbling global financial order and looming US economic problems.

Regardless of optimistic reports of the US GDP's 4.1-percent growth in 2018 and Donald Trump's August 7 predictions that it could even mount to 5 percent in the next quarter, not everything is rosy in the garden of the US economy.

Finance Min.: Russia to Rely on Domestic Investors if US Sanctions Russian Debt
According to the Congressional Budget Office (CBO) and the US Office of Government Accountability (GAO), besides the increasing national debt, the country's federal deficit is likely to mount to $1 trillion by 2020. At the same time, the US debt-to-GDP ratio could reach 106 percent within 14 to 22 years. For its part, the International Monetary Fund expects that the US debt-to-GDP ratio will skyrocket to 116.9 percent already by 2023.

Yet another problem for Washington is "the indebtedness all over the American economy," as Dr. Paul Craig Roberts, American economist, author and former US Assistant Secretary of the Treasury for Economic Policy under President Ronald Reagan, told Sputnik in July 2018.