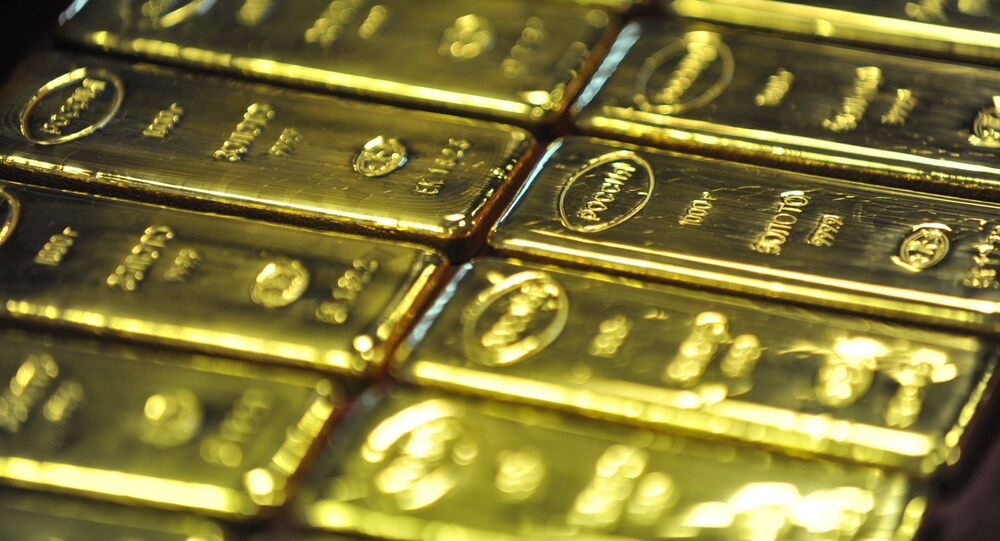 June 2018 figures from the Russian Central Bank show that the country's gold reserves have risen to nearly 2,000 tons, quadrupling since 2008 and coming to constitute over 17% of the country's total foreign reserves. Speaking to Sputnik, seasoned precious metals market analyst Dimitri Speck explained why Moscow's strategy is a sound one.

Russia and China are continuing to buy gold to replenish their treasuries. However, according to Speck, a Munich-based financial analyst, one has to differentiate Russian and Chinese strategy as far as the precious metal is concerned.

"There is a difference between Russia and China," the analyst explained. "In China, gold is purchased first and foremost by private individuals and companies. The Central Bank also buys gold, but its share relative to China's total reserves is rather small."

© Sputnik / Vitaliy Bezrukih
Russia is Dumping Its US Bonds for Gold, But Where Is It Storing Its Bullion?
"On the other hand, private buyers purchase a great deal of gold, as evidenced by the figures of local exchanges dealing in gold," Speck added.

In Russia, by contrast, the Central Bank's share of total gold purchases is high. Furthermore, Russia has been dumping its dollar assets, especially over the last few months.  Both countries, but Russia especially, have solid reasons for dropping dollars in exchange for gold, the analyst stressed.

Russia's gold reserves rose by 106 tons of gold in the first six months of 2018 to a total of 1,944 tons, with Moscow offloading some $77 billion-worth of its US Treasury bills, bonds and notes in the same period, thereby dropping out of the top 33 major holders of US securities. US debt, Speck noted, has obvious disadvantages from the perspective of the Russian Central Bank, given that it can be used for large-scale financial blackmail.

"Of course, part of the issue is that currency can become worthless as a result of inflation. This is also a kind of political declaration, stating that countries which have too many dollars can become the object of political blackmail. Russia is in a situation where it faces political sanctions from the US specifically and the West in general, and therefore has good reason to play it safe and bet on gold. Unlike currencies, precious metals cannot be declared 'worthless'."

In this regard, Speck noted, Russia was playing it smart. "Russia is betting on the only valuable, liquid instrument which is not dependent on the debtor's solvency. This is gold – the traditional store of value between states…[Russia], probably in part due to the threat of sanctions, is acting very rationally by cutting the share of dollars in its reserves and replacing them with gold," the trader emphasized.

According to Speck, China's policy in relation to gold is more difficult to rationalize. Beijing, which has about 1,800 tons of gold, has another problem – "too many dollars."

"China has pumped itself full of dollars, while having relatively little gold. Therefore, it risks becoming the object of blackmail. Many fear that China could dump a huge amount of its dollars on the market in the current trade war with Washington," Speck noted.  "However, this is unlikely, because the US can simply say that 'these securities are temporarily or permanently depreciated. Then the problem will arise where the creditor (China) becomes dependent on the debtor (the US)," he added.

© AP Photo / Michael Probst
Why Russia Is Growing Gold Reserves to Record Levels
Speck admitted that China too was growing its gold reserves. Unfortunately, he said, "they are still relatively small relative to China's economic power, and to its other reserves." China chose the strategy  of buying dollars to spur exports. "But this strategy is short-lived, in my opinion," Speck stressed.

According to Speck, Washington's policy since the 1960s has been to replace central banks' gold-based reserves with US securities. However, this policy has also hurt the US itself, facilitating America's deindustrialization. "In the world, there is no other country which has experienced a trade deficit for over 50 years," the trader noted. "This ongoing trade deficit has led to an excessive growth in the value of the dollar," he added. This, in turn, has led to America's deindustrialization and a long-running industrial downturn.

"This is one of the problems Donald Trump is trying to tackle at the moment, even though he completely wrongly simply shifts the blame on the US's trade partners. This, of course, is stupid," Speck said.

© REUTERS / Jason Lee
Trump is Causing the Chinese Currency Drop He Decries - Expert
Ultimately, the analyst is convinced that gold will continue to grow in value relative to currencies, particularly as more states seek to rid themselves of their dollar holdings.

According to the latest estimates, Russia and China are in 5th and 6th place in total gold holdings, respectively. The US is estimated to have over 8,100 tons of gold (although some US politicians have questioned whether Fort Knox and the New York Fed really have the amounts of gold officially declared). Germany, which recently repatriated its gold from the US, is in second place, with 3,371 tons; Italy is in third with 2,452 tons, and France in fourth with 2,436 tons. Moscow's historical record in total gold reserves was reached in 1941, when the USSR stockpiled some 2,800 tons of gold just before the start of the Second World War.

The views expressed by Dimitri Speck are those of the observer, and do not necessarily reflect those of Sputnik.

Russia is Dumping Its US Bonds for Gold, But Where Is It Storing Its Bullion?