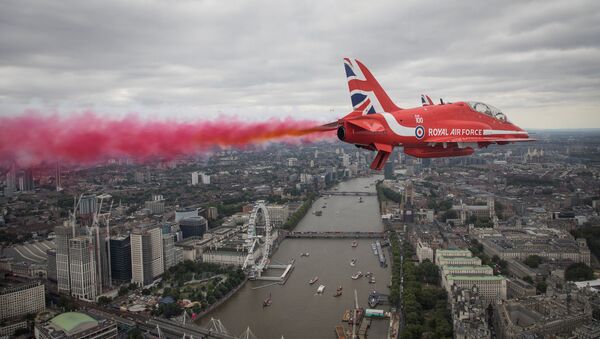 "We don't see any material negative impact with Brexit," chief executive of the US manufacturer said, pointing to opportunities of growth available in the UK.

Speaking to Associated Press, Raytheon's international unit's chief, John Harris, said that the company sees its presence in Britain as a "long play."

"We don't see it as an instantaneous short look," he added.

Headquartered in Massachusetts, US, Raytheon employs 64,000 workers worldwide and more than 1,600 people in Britain. The company, participant of the Farnborough International Airshow, specializes in defense, civil government and cybersecurity.

At Farnborough, Raytheon has demonstrated its latest developments in the areas of missile defense, cybersecurity, air dominance, and advanced radars.

Sensors, cyber and the future of missile defense: See what our experts are talking about at Farnborough International Airshow. https://t.co/T8xinDoNsY #FIA18 pic.twitter.com/CIBG0PmZlP

The US manufacturer also revealed it plans to make its military joint precision approach and landing system (JPALS) operational in 2018 and start production in 2019. JPALS, a military, all-weather landing system, uses GPS signals and gyroscopic equipment aboard the vessel.

Other major businesses and participants of the aviation industry showroom in the east of England have expressed concern of Brexit uncertainty.

"We can't rely on anything. So the white paper… was incrementally positive in terms of the content. But it still leaves loads of unknowns. And we've got a business to run. So, yes we are taking contingency measures and we are going to continue taking those contingency measures. As it happens, look what happened yesterday. It got incrementally worse again," said Rolls-Royce chief executive Warren East at a round-table event on the sidelines of Farnborough Airshow.

Business giants, including Airbus and Jaguar Land Rover, have also indicated they would consider leaving the British market, if the Brexit strategy doesn't get settled and agreed upon by the UK government and its EU trade partners.