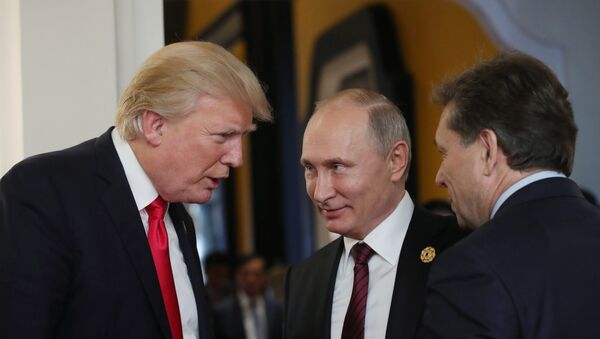 MOSCOW (Sputnik) - The result of the upcoming meeting between Putin and Trump is hard to predict, but there is potential for a thaw in relations between the two states and an in-depth discussion of the Iran nuclear deal, the Syrian and Ukrainian crises, the New START treaty and Pyongyang's denuclearization, politicians and analysts told Sputnik.

Putin and Trump are set to meet in Helsinki on Monday, and according to the Kremlin, are set to discuss the most pressing issues on the international agenda as well as bilateral relations. This meeting will be their first standalone bilateral meeting, preceded only by talks on the sidelines of international summits.

In expectation of the Trump-Putin summit, Trump spoke about the historic event after the NATO summit in Brussels. Trump stated that he hoped that he would be able to get along with Russia and that he had been thanked by the heads of NATO member states for meeting with Putin. Trump added that Putin was his competitor and that he did not exclude becoming friends with Putin one day.

Trump noted that on the agenda of the meeting would be the discussion of the Nord Stream 2 gas pipeline, along with the conflicts in Syria and Ukraine, and alleged Russian meddling in the 2016 US election.

Filippo Lombardi, a lawmaker from the Swiss Christian Democratic People’s Party, stated that he hoped the meeting would bring together both Putin and Trump toward an improved relationship between the two leaders.

"It is difficult to predict the outcome of the meeting. It is important that they meet and discuss frankly and openly among themselves. We know that the relationship between countries depends not only on personalities but these two persons have the possibility to affect political life, parliaments, governments so it could lead to certain warming that will be beneficial for Europe as well," Lombardi said.

Mika Raatikainen, a member of the Finnish parliament representing the Finns Party, stated that he had a positive outlook on the summit, with hopes that the leaders would not sidestep the biggest issues of global concern.

"I personally wish that they come closer on some big issues. I have a positive attitude. It is always good when there is a discussion between the leaders of the world," Raatikainen said.

Raatikainen added that Helsinki had successfully prepared for the summit in terms of security.

"In terms of security, I have background in the policy and I am fully confident that the Finnish police can take care of [the summit]," Raatikainen stressed.

The Finnish capital has been preparing for the upcoming Putin-Trump summit with all flights, excluding commercial ones, to be grounded from July 15 to July 17, which will be close to the Helsinki city center and near the Helsinki-Vantaa Airport, according to the Finnish police.

READ MORE: Flights Over Helsinki to Be Limited Due to Putin-Trump Summit — Police

Raatikainen noted that the summit would be good for local business, along with restaurants and hotels, due to the number of journalists covering the meeting.

According to the Finnish Foreign Ministry’s director of communications, Vesa Hakkinen, as of Wednesday, the ministry had received 1,400 requests for journalist accreditation, excluding the leaders’ journalist pools.

Nuclear Consensus Out of Reach, New START Treaty in Focus

Peter Hayes, the executive director of the Nautilus Institute for Security and Sustainability, stated that a discussion on the denuclearization of the Korean peninsula would likely ensue at the meeting between Trump and Putin, but that it would not lead to any concrete further steps on the issue’s resolution.

"[Putin and Trump] are unlikely to reach any further agreements concerning cost-burden sharing and a role for Russia in picking up the tab for denuclearization or the rebuilding of the DPRK [North Korean] economy; and they will likely agree to disagree on the extent to which Russia's implementation of sanctions on the DPRK conforms to UNSC resolution and Trump's preferences," Hayes stated.

Hayes noted that both presidents were likely to brand as constructive the result of June's Singapore summit, during which Trump signed an agreement with North Korean leader Kim Jong Un that requires Pyongyang to denuclearize in exchange for a freeze on the US-South Korean military drills and eventual sanctions relief.

"Putin and Trump are likely to agree that it is good that Trump responded positively to Kim Jong-un's initiative to meet and resolve hostility and achieve denuclearization of Korean peninsula," Hayes said.

Putin has previously expressed the need to resolve the tensions on the Korean peninsula through peaceful means, and urged all involved states in North Korean denuclearization to work on the development of security guarantees.

World
Trump: Helsinki Summit With Putin May Be Easier Than Talks With May
Hayes added that it was possible for the meeting to result in plans for further multilateral high-level dialogue on North Korean denuclearization, however, this might be impossible due to the pressure that Trump is facing from the Administration and the Republican Party to take such a cooperative stance toward Russia.

Matthew Bunn, a professor of Practice at Harvard University's John F. Kennedy School of Government and member of the board of the Belfer Center for Science and International Affairs, stated that any cooperation, such as an agreement to extend the New START Treaty would be difficult to achieve with the current state of US-Russia relations.

"US-Russian relations are currently in a poisonous and dangerous state, making all forms of cooperation difficult – including extending New START. Both countries have legitimate complaints against the other," Bunn said.

A senior US administration official confirmed to reporters on July 5 that the New START Treaty, set to expire in February 2021, would likely be on the agenda of the Putin-Trump meeting.

Tarja Cronberg, a distinguished associate fellow at the Stockholm International Peace Research Institute, stated that the previously outlined diverging positions on the Joint Comprehensive Plan of Action (JCPOA) would limit what could be achieved at the Putin-Trump summit.

"The topic may be mentioned but it will not be one of the main points on the Agenda. The Russian and the US views diverge too much, Russia wants to keep the deal, the United States has exited the deal," Cronberg said.

In May, Trump announced that the United States would exit the JCPOA that was signed by Russia, China, the European Union, the United Kingdom, France and Germany. The accord stipulated the gradual lifting of anti-Iran sanctions in exchange for Tehran maintaining a peace-orientated nuclear program.

Putin reaffirmed his commitment to the JCPOA earlier on Thursday in a meeting with the Iranian supreme leader’s top adviser for International Affairs, Ali Akbar Velayati. The remaining signatories of the JCPOA have also expressed their commitment to the deal.

Lord Alfred Dubs, a member of the UK House of Lords, stated that he was hopeful that Putin would be able to convey the importance of the JCPOA to Trump at the summit.

"Putin should tell Trump that Iran deal is an important one. It is against Russian and western interests. I hope Mr. Putin will be firm on that and address this issue with Trump," Dubs said.

Cronberg suggested that a discussion on the JCPOA might result in Trump agreeing to allow certain Russian companies to avoid US sanctions on Iran.

"So, unfortunately, I do not think consensus will be tried nor reached on any major aspects of the deal. A possible point [of consensus] could be the US granting a specific waiver from the sanctions to one or several of the large Russian companies working both with the US and Iran. But not likely and only if Putin makes a special request," Cronberg said.

US Secretary of State Mike Pompeo remarked on Sky News Arabia that several countries that ask for relief from US sanctions on Iran’s oil exports could be granted relief, which will come into force on November 4.

Bunn stated that he wished that both Trump and Putin, despite any existing disagreements, would be able to overcome them in the name of nuclear arms control and nonproliferation.

"Even during the depths of Cold War, when we were locked in a global struggle against each other, we saw that while we had many conflicts we also had common interests, and our nations cooperated to negotiate nuclear arms control and build the global nuclear nonproliferation regime; we should be able to do the same today," Bunn said.

Ukraine, Syria on the Docket

Congressman Christopher Smith, the head of the US delegation to the Parliamentary Assembly of the Organization for Security and Co-operation in Europe, expressed hope that during the summit there will be advances on the settlement of conflicts in Ukraine and Syria.

"I have hope that some very good, concrete agreements will accrue to me and the dialogue will lead to some movement, from our point of view, on Ukraine and Syria," Smith said.

Russian Foreign Minister Sergey Lavrov stated at a press conference on July 4 that southern Syria would likely be discussed at the summit.

On June 29, US media reported that Trump would be looking to clinch a deal with Putin that will stipulate US military withdrawal from Syria.

Where Ukraine is concerned, Smith stated that he anticipated that Trump and Putin would address the implementation of the Minsk agreements and the potential for the deployment of UN peacekeepers to Ukraine, which Putin had previously expressed support for.

"On Ukraine, my hope will be that Minsk agreements be fully and faithfully implemented so it will be a ceasefire that is durable and perhaps a deployment of peacekeeping forces under the hospices of the United Nations. There are some 90,000 UN peacekeepers deployed around the world. I hope that coming out of that summit will be movement in that area," Smith underlined.

Smith added that while discussing Syria, he hoped Trump would raise with Putin the issue of humanitarian access for agencies to areas affected by the conflict.