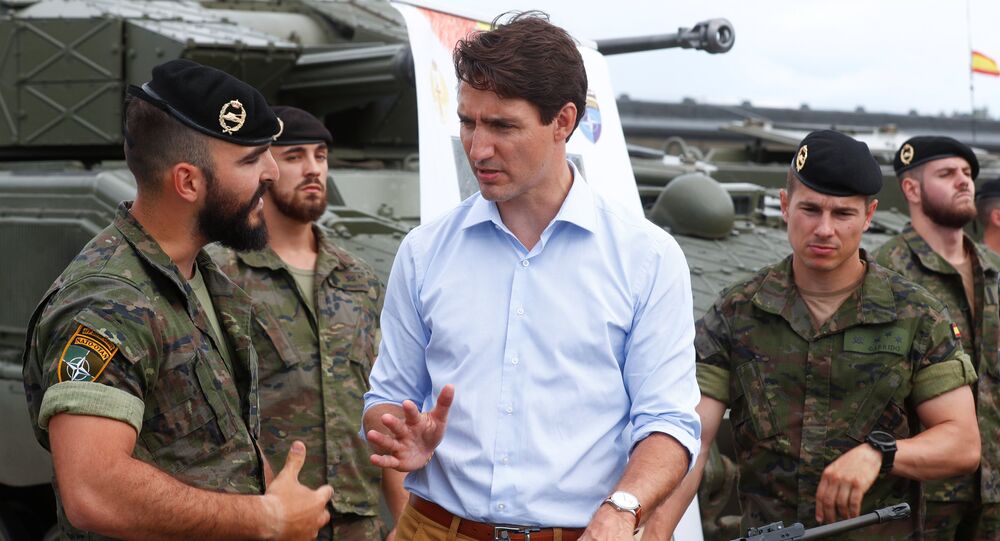 The Canadian prime minister's remarks come a day before the start of a contentious NATO summit in Brussels this week, and President Trump's meeting with President Putin in Helsinki on Monday.

Speaking to reporters in Riga, Latvia, on Tuesday, Prime Minister Justin Trudeau called for NATO to present a "clear and firm response" to Russia.

As justification, Trudeau cited Crimea's unification with Russia, the Ukrainian crisis, as well as "actions elsewhere around the world, most notably on UK soil, in Salisbury," in reference to the case of the alleged poisoning of former Russian intelligence officer Sergei Skripal, which London blamed on Moscow without presenting any solid proof.

"We certainly hope that Russia will choose to become a more positive actor in the global sphere than it has chosen to be in the past years," Trudeau said.

© AP Photo / Matt Dunham, Pool
Pricey Alliance: How Trump is Nailing European NATO Members to the Wall
During his Latvia trip, Trudeau promised to extend Canada's commitment to lead one of the four NATO rapid response battalions deployed in the country until 2023 and to boost the number of Canadian troops there from 455 to 540. "We are ready to support our allies while facing global threats to security," he said.

Trudeau's remarks come a day ahead of the annual NATO summit being held in Brussels on Wednesday and Thursday. This year's agenda is expected to include tense discussions about the defense commitments of US allies, which President Trump has repeatedly slammed as woefully insufficient.

The president has demanded that US allies adhere to the NATO pledge of spending 2 percent of GDP on defense. According to Stockholm International Peace Research Institute figures, Canada spent 1.3 percent of its GDP, or $20.6 billion, on defense in 2017.

Canada's relations with its southern ally have been severely strained in recent weeks over a growing trade conflict between the two countries, with Canada introducing $12.6 billion in tariffs on US goods on July 1 in response to US aluminum and steel tariffs. Things got personal between Trump and Trudeau at last month's G-7 summit, with the president calling the prime minister "very dishonest" and "weak."

© Sputnik / Mikhael Klimentyev
NATO Alarmed Over Future Trump-Putin Agreements 'Uncoordinated' With Bloc – Reports
Trudeau's call for a "firm" NATO response to Russia also comes ahead of Trump's Helsinki summit with Putin, with NATO officials expressing alarm over the potential of "uncoordinated" agreements between Moscow and Washington, and over the summit possibly prompting the US to withdraw part of its military contingent on the European continent. On Monday, The New York Times reported that Trump told his Russian counterpart that his "stupid" White House aides had tried to stop him from phoning Putin in March.
...
Reddit
Google+
Blogger
Pinterest
StumbleUpon
Telegram
WhatsApp
028