Ekaterina Blinova
All materialsWrite to the author
Ex-FBI Director James Comey and some former Obama administration officials would have had much to lose if Julian Assange had shared his vision on what happened during the 2016 US presidential race, Wall Street analyst Charles Ortel opined speaking to Sputnik, explaining why the ex-FBI chief was so "incurious" about the DNC server hacking.

The story of a might-have-been deal between the US Department of Justice (DOJ) and WikiLeaks' founder Julian Assange told by John Solomon left one question unanswered: Why did former FBI Director James Comey step in and upset the agreement?

Sputnik got in touch with Wall Street analyst and investigative journalist Charles Ortel, asking him to share his opinion on the matter.

"Comey was/is intimately familiar with the Steele dossier, and likely knows much concerning which foreign intelligence services may have proven useful in developing allegations against Americans and others connected to the Trump presidential campaign and to the incoming Trump administration," the investigative journalist noted, referring to the dodgy "Trump dossier" prepared by former British intelligence officer with the secret intelligence service MI6, Christopher David Steele.

Vault 7, DNC Hacking: How Comey's Intervention Upset DOJ Deal With Assange
Ortel explained that "prior to the presidential election on November 8, 2016, Comey and others may have felt their various activities would stand them in good stead with Hillary Clinton, who most assumed would easily defeat Donald Trump."

However, when their hopes did not come true, it is likely that many Obama administration officials, including the former president, were seriously concerned that they could soon "find themselves in legal jeopardy," the investigative journalist pointed out.

"Perhaps in league with other Obama era holdovers, Comey and Senator [Mark] Warner (let's not forget that he and the recently indicted leaking Senate staffer [James Wolfe, 58] have much to lose from determined investigations into history) likely decided to flush the Assange negotiations, perhaps encouraged by contacts in the UK intelligence community, who may also stand exposed for their cooperation in Trump-related investigations," the Wall Street analyst suggested. 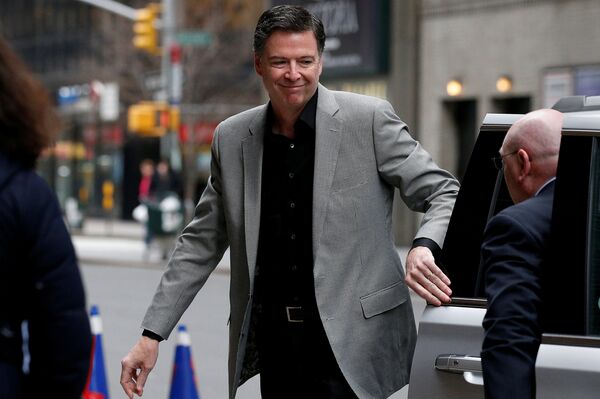 Why Comey Remains so Incurious About the DNC Hack

In some twist of fate, Comey's intervention in the Assange-DOJ investigation also killed a chance to find out what forces had been involved in the Democratic National Committee's server hacking during the 2016 presidential race. WikiLeaks' founder was ready to provide ample evidence that Russia had not been behind the data breach.

On the other hand, it still raises questions as to why the Comey-led FBI had not examined the DNS server following the alleged cyber intrusion.

"Among many inexplicable decisions, the failure of the FBI to demand and obtain the DNC servers, and then the failures of  Obama administration Justice Department officials to determine quickly and before the 2016 election happened whether Russia or other foreign powers may have been interfering is tough to fathom," Ortel highlighted.

'Crooked Hillary' and 'Slippery Comey': Horowitz About to Drop a Bomb – Analyst
He recalled that under the Obama administration numerous accusations were made about supposed cyber espionage by states including China, North Korea, Iran and others.

"The logical move for the FBI after DNC hacking claims were made would have been to use the sophisticated tools that our Federal government does have to learn the truth," the Wall Street journalist emphasized. "Yet, Comey displayed and still displays a remarkable lack of interest in figuring out what happened with DNC server breaches, and with claims that Pakistani government-linked spies may have obtained Congressional and state secrets through use by so many Democrats of the Awan family."

It was previously reported that Imran Awan, an IT employee of ex-DNC chair Debbie Wasserman Schultz, and his family had access to the e-mails and electronic files of members of the House's Intelligence and Foreign Affairs Committees for years.

"A bad reason Comey and others remain so incurious may well be that they know exactly who started the Russian collusion narrative, that this narrative started much earlier than we presently know, and that US political interests and nations that had most to lose from a Trump presidency laid illegal traps various ways," the investigative journalist presumed.

Comey's Intrusion Appears to be a Plot

The question then arises as to whether it was Comey's own initiative to meddle in the DOJ's negotiations with Julian Assange or a "collective" decision.

"I see this much more as a plot," Ortel responded. "At first, to curry favor with Hillary Clinton, that quickly morphed into madcap efforts to protect Barack Obama, John Kerry, Loretta Lynch, James Comey and others in the pro-globalist, anti-Trump cabal."

The Wall Street analyst also presumed that in general, a Trump presidency was likely seen during 2016 as a threat to the "special relationship" between left-leaning British elites and their counterparts in the United States. Similarly, pro-globalist elites viewed the potential US-Russia rapprochement under Trump as a threat, he added.

"Knowing how much so many in the Obama administration may have colluded to promote Hillary Clinton's candidacy and then to obstruct president-elect, numerous persons likely pulled strings over James Comey until President Trump correctly, yet belatedly, fired him," Ortel suggested.

According to Ortel, "the forthcoming Inspector General Horowitz report concerning how Obama era officials and others may have ordered and attempted to cover up illegal spying on Americans by US and allied government security services should further shake the Washington, D.C. establishment to its core."

On June 25, award-winning investigative journalist John Solomon came up with a story about how Julian Assange tried to make a deal with the Trump administration in January 2017, ahead of WikiLeaks' massive exposure of CIA global hacking techniques in March-April 2017. According to Solomon, Comey's unexpected instructions to stop negotiations undermined the deal placing the CIA under fire and preventing Assange from disclosing the secret of the DNC server.

It wasn't a mere chance that Assange's lawyers approached DOJ officials to strike a deal. As Ortel remarked, the WikiLeaks founder and his team "hoped that the incoming Trump administration might be more receptive than previous administrations to negotiating a change in Assange's legal predicament, in exchange for useful information."