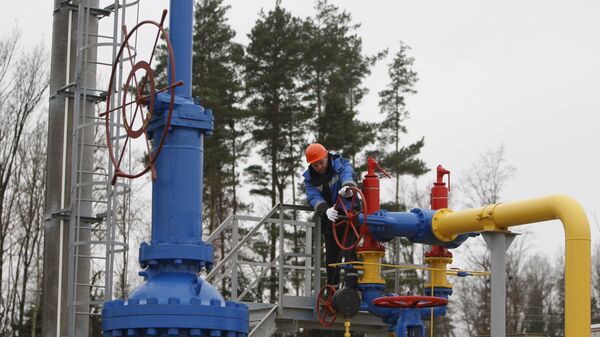 © Sputnik / Egor Eryomov
/
Go to the photo bank
Subscribe
Following the Stockholm arbitration court ruling of February 28, 2018, in favor of Ukraine's Naftogaz, a Dutch court has arrested Gazprom's assets in the Netherlands. Speaking to Radio Sputnik, Justin Dargin, Global Energy Scholar at the University of Oxford, has shared his views on the implementation of the court's decision.

Justin Dargin: It appears there are several issues that have to be taken into account. One issue is that if you look at one of the main claims there was a reduction of gas that was transiting through Ukraine to Europe, it seems that the arbitration court did not take into consideration that there also was a reduction in European demand as well during that time. It appears that it was not taken into account and perhaps when the appeal is settled it could take up to perhaps half a year or so, but perhaps the court will be able to take that into account amongst other issues as well. So we'll see how that plays out.

Sputnik: What measures do you think could be taken by the Russian oil company in retaliation?

Justin Dargin: Of course there is always ability for Gazprom to reduce shipments to Ukraine itself, I mean that's also a possibility but that's more politicized. But if you do look at it legally then of course the issue could be tied up in arbitral courts for some time. So if we look at the main legal weapon then that could be it, but also there are different political means that could be utilized at the same time.

Sputnik: This actual decision could also be appealed is that not the case?

Sputnik: Have we seen similar precedents in cases like this and how they ended?

Justin Dargin: It really depends because of course each case has its own unique merits to it, so it just actually depends. We do know that the general atmosphere in the EU at the moment is not necessarily amenable towards claims put forward by any Russian-linked companies. I am not necessarily saying that there was overt prejudice that was employed, although the general atmosphere there is a bit hostile towards the interests of Gazprom and also other entities in Russia at the moment.

Sputnik: How you think this is going reflect on relations between Moscow and Kiev — they have already been strained for many years now?

Justin Dargin: It definitely is not going to get any better and of course the Ukrainian government has become quite ecstatic, we could say, over the ruling [of the Stockholm arbitration court] and the attempt to be able to arrest certain Gazprom assets. Ukraine is going to attempt to benefit as much as possible from this ruling and use that as a type of segway, I believe, to pursue its policy to attempt to constrain Russia and also to constrain Russia's ability to create alternative pipelines and transit zones throughout Europe.

The views and opinions expressed by Justin Dargin are those of the speaker and do not necessarily reflect those of Sputnik.