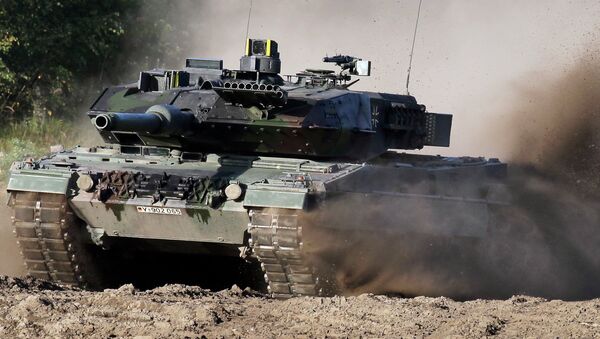 © AP Photo / Michael Sohn
Subscribe
While the EU is paving the way for tanks in Europe, preparing infrastructure, Germany is arming itself with the newest А7V modification for the Leopard 2, advertised by the producer as the world's most powerful main battle tank.

The newspaper Die Welt has reported about the new rise of one of Germany’s most renowned machine modifications, the Leopard 2 А7V. The German army has been training with the new high-tech generation of these battle tanks on the country’s largest army base and its central training center close to the northern city of Munster. According to the newspaper, the German military has 20 such tanks, produced by manufacturer KMW.

The number of tanks, which are said to have revolutionized warfare and secured the success of the Nazi Germany during the first two years of World War II, shrunk in the German army as the so-called Iron Curtain fell, as they were considered relics of the Cold War. But Die Welt points out that this type of war machine has been gaining importance again as a “deterrent to Russia in the Baltic Region. The newspaper stresses that concerns in Estonia, Latvia and Lithuania, countries that view their Eastern neighbor as a threat, have been growing because of the conflict in Ukraine after Crimea’s reunification with Russia. Besides, according to the media, the NATO countries have moved the alliance and national defense spending back into the center of their security policy.

According to the German defense minister, cited by the newspaper, state and alliance defense matters got high priority as the recent “trends were reversed in the last legislation session, when it was proposed to adapt the German military to the new security situation.”

"This also included increasing the number of main battle tanks from the current 220 to 328," said the spokesman.

However, the turn has face difficulties within NATO allies in Europe, first of all the infrastructure. Aiming to ensure faster transportation for troops crossing the continent due to growing tensions with Russia, in March 2018 the EU Commission presented a plan to expand roads, bridges and rail networks.

Another difficulty Germany’s tanks currently face is operational readiness. According to February’s report from the Ministry of Defense, cited by Die Welt, only 105 of Germany’s 244 Leopard 2 battle tanks were on average ready for action because of an insufficient supply of spare parts and problems with maintenance due to budget cuts. The Bundeswehr plans to be fully operational in 2019 when Germany is to take over the leadership of the NATO’s multinational Very High Readiness Joint Task Force (VJTF) team in Eastern Europe.

000000
Popular comments
If the Germans think their tanks are sooo good why don't they dare to enter them in the Russian annual tank Bi-Athlon with other countries and see how good they are. Same goes for the Americans that don't have the guts to have there flying pig, the F-35 in a real fly off test with the most modern planes that other countries have.