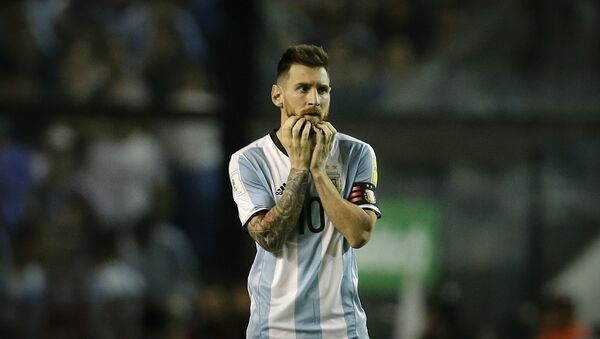 Terror groups, forbidden in Russia, have reportedly promised to turn football stadiums into jihad battle fields, filling “the ground with blood” during the upcoming major tournament in Russia.

Graphic terrorist threats against the 2018 FIFA World Cup are reportedly being spread via Daesh*-attributed Telegram accounts. According to the Daily Mail several menacing posters were released in one of them, including pictures of jihadists slaughtering major football stars like Portugal’s Cristiano Ronaldo and Argentina’s Lionel Messi on a football field. Along with the menacing pictures is a threat in English, claiming “FIFA World Cup Russia 2018 — victory will be ours” as well as citing Islamist verses, threats and a broken World Cup emblem.

Apart from several pictures of beheaded footballers, or tortured behind prison bars, the series of images also presents masked militants armed with guns, bombs and grenades at the stadiums or close to the venues, including the “Luzhniki” Arena, where the World Cup Final will take place.
It’s not the first time the banned terror groups have used the image of the football prodigy from Argentina, such threatening pictures of him also circulated in November 2017.

Russia will host the FIFA World Cup for the first time in 2018, with the championship set to kick off on June 14 and continue through July 15. Moscow, Kaliningrad, St. Petersburg, Volgograd, Kazan, Samara, Nizhny Novgorod, Saransk, Rostov-on-Don, Sochi and Ekaterinburg will host the games. Nizhny Novgorod will host group stage games, as well as the Round of 16 and quarter-finals.

Security will be strengthened for the World Cup according to a decree, signed by Russian President Vladimir Putin ahead of the 2017 FIFA Confederations Cup last year.

The 2017 FIFA Confederations Cup in Russia was recognized as successful by a number of measures, including the FIFA president's appraisal.