'Whitehall Knows Best' or the Art of Taking Britain to War 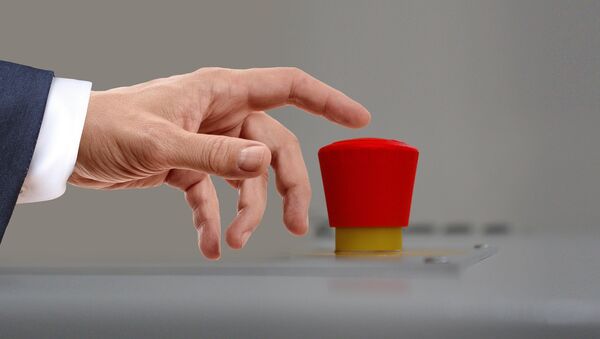 The uncertainty around the process of launching military action by Britain has come full circle after cruise missiles landed in Syria mid-April. Two UK academics argue the attack chipped away further at a parliamentary convention intended to secure Parliament’s say and created an added exception for airstrikes – a cornerstone of modern warfare.

In 2011 the coalition government in Britain suggested that following the 2003 invasion of Iraq a convention had emerged that prior to committing troops to military operations, the Parliament's House of Commons should have an opportunity to discuss the matter.

Authors of the new book Parliament's Secret War, Drs. Veronika Fikfak and Hayley J. Hooper have found that "in addition to broadly-defined 'emergency' or 'secrecy' exceptions, two specific types of military activity — the deployment of embedded Special Forces and unmanned drone strikes — had already been exempted from the convention."

The academics then argue that increasing exemptions from the convention, combined with a flourishing "information asymmetry" between government and parliament, creates a real risk of another 'Iraq moment' in the near future.

Nothing Set in Stone

It is not a matter of breaking UK legislation. Whitehall is not legally required to get Parliament's approval to launch military operation. The government's right to defend the realm, including the deployment of military forces, is granted by the prerogative executive powers which are exercisable by Ministers on behalf of the Crown. The Queens Regulations for the Army state:

"The government and command of each of the fighting services is vested in Her Majesty The Queen, who has charged the Secretary of State with general responsibility for the defence of the Realm and established a Defence Council having command and administration over Her armed forces."

When the UK Prime Minister Theresa May joined France and the US in launching missiles on Syria on April 14, she was legally in the right.

That didn't however stop the members of the Parliament (MPs) from condemning government's refusal to consult with parliamentarians before acting militarily.

"The idea that the War Powers Convention gives parliament political control over whether the UK goes to war has now been hollowed out to the point where any claim that elected MPs have a say on military action is essentially a deception of British civil society," says Dr. Fikfak, a Fellow and Lecturer at the University of Cambridge.

Since 2003, the government has consulted the Parliament on several occasions, strengthening the credence of the convention — in 2013 in response to the alleged use of chemical weapons in Syria, in response to the actions of Daesh* in Iraq in September 2014 and in 2015 to extend military against ISIS into Syria.

At the same time, the commitment of British forces to Helmand province in Afghanistan took place without any debate, as well as the deployment of British military assets in Mali in early 2013. Such asymmetry indicates that adhering to the convention is not a guaranteed behavior by the government and shouldn't be perceived as such.

"The flexibility of constitutional conventions is in principle a great strength. However, in the context of the War Powers Convention such flexibility represents a major weakness," say Drs. Fikfak and Hooper.

It is also not a matter of the government having an ironclad list of exceptions to the convention and not being able to stick to. The list is fluid and can be altered.

The academics Fikfak and Hooper argue the convention has already been subject to "a myriad of exceptions" controlled by government. They talk about the case of a Daesh member getting killed in 2015 by drones in Syria, despite parliament disproving the use of force in Syrian territory.

"Justified by the then government as a 'new departure', and couched in language of 'immediacy' and 'direct threat', this was interpreted "generously" by the Joint Committee on Human Rights as an 'emergency' that didn't breach convention — a precedent for the exception of drone warfare," the Cambridge University press release says.

According to Dr. Fikfak and Dr. Hooper, the convention gets undermined when the government is selectively disclosing vital information to the Parliament under the guise of state secrecy.

"This was a limited targeted strike on a legal basis that had been used before. And it was a decision which required the evaluation of intelligence and information, much of which was of a nature that could not be shared with Parliament. We have always been clear that the government has the right to act quickly in the national interest… It is Parliament's responsibility to hold me to account for such decisions, and Parliament will do so. But it is my responsibility as prime minister to make these decisions," Mrs. May told the House of Commons on April 16.

READ MORE: UK PM May: We Acted in Syria Over National Interest, Not Just Following Trump

"Although the sources of intelligence could never be revealed to parliamentarians, they could be allowed to consider the reports of the Joint Intelligence Committee in secure premises, and if thought necessary, spend part of an otherwise open debate forcing the government to justify its reading of the intelligence case for armed conflict. In the wake of Iraq, the position that ‘Whitehall knows best' is constitutionally untenable," the researchers argue.

Most recent additions to the exception list relate to the types of military activity.

It is unclear whether the modern form of warfare  — airstrikes — falls under the types of military operations ‘covered' by the convention. There is now room for significant doubt as to whether the War Powers Convention applies to air strikes, the academics say.

"Moreover, the Prime Minister clarified that Parliament should be involved only when the decision concerned ‘major deployments like Iraq' when the engagement of troops would be long-term. This redefinition (undertaken unilaterally) by Mrs. May affords future governments considerable latitude," they conclude.