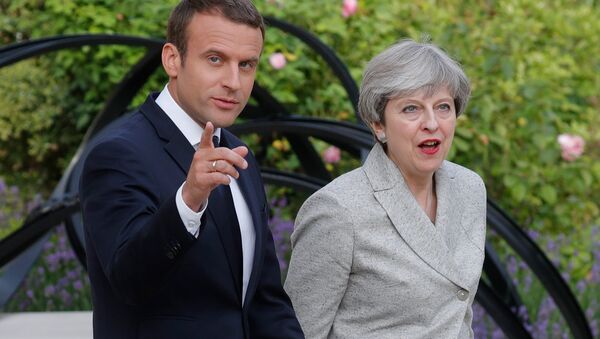 UK Prime Minister Theresa May says she have authorized the British armed forces to conduct coordinated and targeted strikes to “degrade the Syrian regime's chemical weapons capability and deter their use." Her statement was followed by a similar message from French President Emmanuel Macron.

UK Prime Minister Theresa May says she has authorized British armed forces to conduct coordinated and targeted strikes to "degrade the Syrian regime's chemical weapons capability and deter their use," according to a Reuters report.

"This evening I have authorized British armed forces to conduct co-ordinated and targeted strikes to degrade the Syrian regime's chemical weapons capability and deter their use. We are acting together with our American and French allies," she was cited as saying in a statement.

May said diplomatic efforts "have been repeatedly thwarted," and pointed out there is no practical alternative to the use of force against Syria.

"We have sought to use every possible diplomatic channel to achieve this [end of chemical weapons use]. But our efforts have been repeatedly thwarted… So there is no practical alternatives to the use of force," she said.

"This is not about intervening in a civil war. It is not about regime change. It is about a limited and targeted strike that does not further escalate tensions… it will also send a clear signal to anyone else who believes they can use chemical weapons with impunity," she continued.

"We cannot allow the use of chemical weapons to become normalised — within Syria, on the streets of the UK, or anywhere else in our world," she said.

French President Emmanuel Macron also said he has ordered his country's military to intervene in Syria together with the US and UK.

According to Macron, the strikes in Syria target "regime chemical weapons capacity."